From peace and anti-war demonstrations to climate change marches and speeches by political figures, the legendary festival is well-known for its political undercurrent and activism roots. 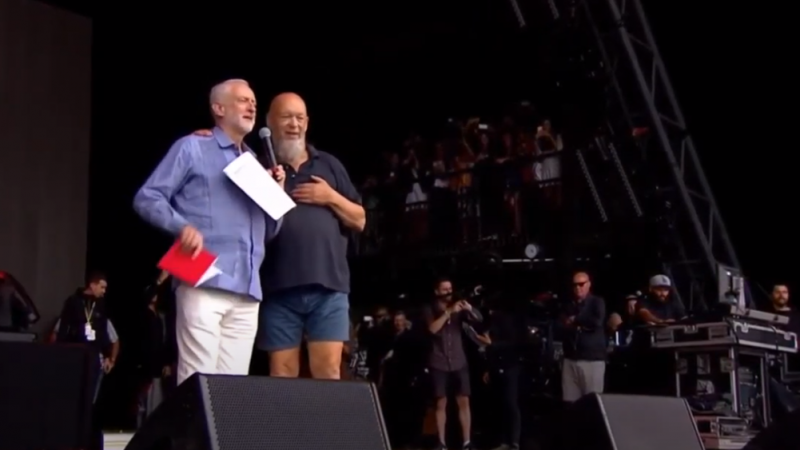 As the world’s greatest festival celebrates its 50th anniversary this weekend, we look back at some of the best political performances at Glastonbury over the years.

Jeremy Corbyn on the Pyramid Stage

In 2017, the then Labour leader gave a speech on the Pyramid Stage. Calling for a “world of human rights, peace, justice and democracy all over the planet,” while urging Donald Trump to build “bridges not walls,” the political veteran’s hotly-anticipated appearance pulled in one one of the biggest audiences ever at the iconic Pyramid Stage.

In 2002 and 2008, Tony Benn gave speeches in the Left Field area. In what was described as an “impassioned address to a packed tent,” Benn delivered a “tub-thumping political narration that could have converted the most cynical.”

“We can harness all the energy of the people who come here today to tackle the most serious problems of the human race,” Benn told the Left Field audience.

In 2014, the festival’s founder Michael Eavis renamed Left Field tower as “Benn Tower of Strength,” in a tribute to the much-loved politician who passed away in March that year.

“What a fantastic fella, eh? Principled. A conviction politician who didn’t do what was popular, he did what was right. He was so much a part of this. He was an A-star performer. How can we replace him, I ask you? We miss him so much,” Eavis had said.

The GMB Union is a sponsor of the Left Field at Glastonbury.

In 2007, the union brought Polish rock and reggae bands to the festival as a means of highlighting the plight of exploited migrant workers in Britain.

At the time, GMB had set up campaign centres to recruit some of the 500,000 Polish migrant workers in Britain. Following a deal with the Polish Cultural Institute, the union invited bands Poise Rite and Habakuk to “highlight the plight of non-unionised workers many from Poland and other east European countries.”

In 2019, the environmental activist group Extinction Rebellion led a procession through Glastonbury to highlight the threat of climate change. The procession began at the Park Stage with a series of talks from guest speakers on the immediate action that is required to combat a global climate disaster. The parade then made its way to the Stone Circle, where the campaigners attempted to assemble the ‘largest ever human hourglass sculpture.’

Prior to the event, Emily Eavis had said: “This is a chance for everybody at the festival who feels passionately about protecting our planet and future generations to be part of a collective moment.”

Green MP for Brighton Pavilion Caroline Lucas appeared on the Pyramid Stage in 2011 before American rap group Wu Tang Clan played. The long-standing politician and climate change activist and campaigner spoke about water scarcity and global poverty before the rappers started their set.

And possibly the worst political appearance…

This week has seen Billy Bragg talk about his trip to Glastonbury with Boris Johnson in 2000. The folk singer, who has organised the Left Field tent at the festival for a number of years, says he has not been in contact with Johnson since he gave him a documented tour of Glastonbury 22 years ago.

Speaking to the Glastonbury Free Press, Bragg said: “I tell people it was just a bad trip and I don’t know how it ended up on YouTube.

“I thought it was just some bad magic mushrooms but actually it must have really happened. In my defence, he was relatively harmless at the time.

“It just goes to show you have to be careful who you elevate to positions of celebrity. Then, he was that guy off Have I Got News For You.

“Everybody was really pleased to see him. I can’t imagine if I walked around with him now he’d have the same reaction.”

Bragg added: “I think he’s someone who has lived all his life without taking any responsibility for anything: professionally, personally or politically.

“Boris is someone who acts with impunity and to have someone like that running the country is downright dangerous.”