Parts of the press seem intent on discrediting all opponents of what is described as a 'monstrous' deal to ‘offload’ asylum seekers in Rwanda. 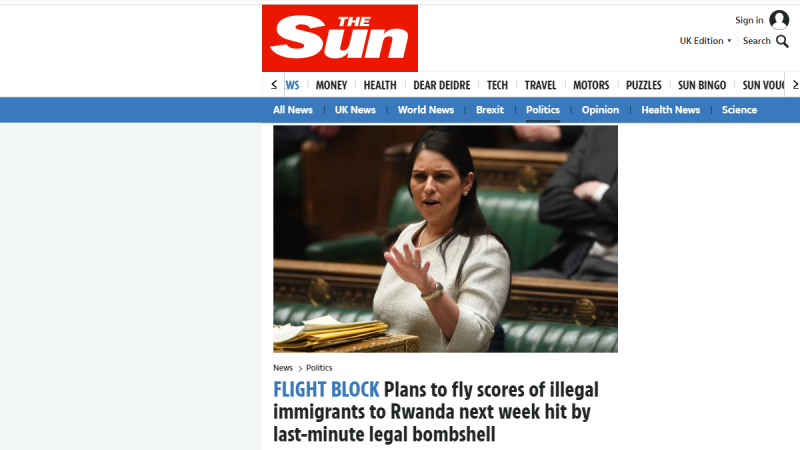 The right-wing media seem to be conducting an hysterical culture war campaign backing the government’s Rwanda policy, droning on about left-wingers, belittling what they refer to as ‘so-called’ human rights activists, and sabotaging civil servants.

A legal challenge against deporting migrants to Rwanda was rejected by the High Court on June 10. The first flight carrying asylum seekers almost 5,000 miles to the East African nation is scheduled to leave the UK on June 14.  An appeal against the decision to give the first deportation flight the go-ahead is due to be heard today.

News that a High Court judge ruled against the legal bid to stop the deportation of migrants from the UK to Rwanda, sparked a heated response.

Prince Charles is reported to have privately criticised the government’s policy, describing the practice as “appalling.” He joins a string of high-profile figures that have publicly spoken against the policy. The Archbishop of Canterbury described the scheme as the “opposite of the nature of God.”

Amid widespread resentment of the government’s ‘unworkable, unethical’ ‘partnership’ with Rwanda, the right-wing press have been busy conducting an hysterical culture war campaign backing the policy.

Right-wing political commentator Patrick O’Flynn, who is a former MEP and political editor of the Daily Express, tweeted: “So far as I can see the people agreeing with Prince Charles are mainly leftish republican types.”

Prior to legal challenge, the Sun spoke of how “left-wing groups and unions have teamed up to stop Tuesday’s flight.” The article spoke of how “they” – left-wingers – “want a review of the plan to send asylum seekers to Africa as a deterrent.” The article provocatively describes how Afghans fleeing the Taliban are expected to be on the flights and could be tagged pending the row, and how Patel has told her team to “work around the clock to halt the legal bid.”

The article contends that “rebellious mandarins have launched a Twitter against Priti Patel’s ‘racist’ plan and have also posted ‘refugees welcome’ stickers around offices.”

The piece points readers to an anonymous ‘Our Home Office’ account, which launched, according to the Daily Mail, a ‘campaign’ against the policy, including the posting of a poster of the Queen’s Jubilee sketch with Paddington Bear designed to look like a ‘subject of interest notice’ from immigration officials.

In typical sensationalising fashion, the Mail’s piece talks of the claims that some staff are ‘threatening a mutiny over the policy – despite political impartiality being a legal requirement for civil servants.’

The same day – June 9 –  the Mail published an article by Dr Alan Mendoza, founder and executive director of the right-wing lobby group the Henry Jackson Society, which the Tory government gave over £80,000 to and has paid thousands of pounds in benefits to Priti Patel and Michael Gove.

Continuing the assault on civil servants, Mendoza contends that some in the civil service are “working to undermine” their duties to implement government guidelines on immigration. In a swipe at the Guardian, the article says how “The Guardian newspaper predicted gleefully that if the flight is postponed, the people booked on it will be issued with electronic tags and given their freedom.”

In an especially derogatory jab at civil servants, Mendoza speaks of one “virtual-signalling civil servant, who lacked the courage to be identified, told Sky News this week that processing asylum claims in Africa was akin to people-trafficking.”

The author proceeds to pin Britain’s immigration policy that is, in his words, in “abject chaos”, on “left-wing activism.”

The piece speaks of New Labour’s ‘deliberate choice’ to, after 1997, ‘engineer mass immigration,’ and how “former Labour adviser Andrew Neather notoriously said this was a policy devised to ‘rub the Right’s nose in diversity’ – that is, to change the UK’s ethnic make-up as a taunt to Middle England.”

Attempting to whip up furore against the pro-immigration left, the author claims Labour’s policy to gain more votes for the left, “backfired spectacularly”, alluding to working-class communities apparently watching “as their schools grew more overcrowded, their GPs oversubscribed and waiting lists for social housing grew ever longer.”

In an attempt to defend the widely despised policy, Mendoza talks of how modern-day Rwanda is “safe, civilised and friendly” and has an “outstanding” track record on ensuring women are represented at every level of government.

The article failed to mention accounts that describe Rwanda as an “extremely repressive and frightening country”, as Michael Wrong, author of a recent book on Rwanda titled ‘Do Not Disturb’ told the BBC. Nor did it mention that Rwanda is the most densely populated country in Africa and how its president Paul Kagame and his government may have achieved significant economic progress since the 1994 genocide in which more than 800,000 ethnic Tutsi and the moderate Hutu who tried to protect them were killed, but critics say it has come at the cost of political repression. The piece also failed to make reference to the UN’s claims that the scheme violates the international Refugee Convention.

Also published on June 9, the day before the High Court hearing, was an article in the Sun written by Douglas Murray, who is never one to mince his words when it comes to criticising the left.

Murray talks of how illegal migrants will stay in a “resort hotel with a pool”, while the “Left dubs this ‘hell.’

The first migrants deported to the Rwandan capital of Kigali are, according to Murray, due to arrive in a resort hotel with a swimming pool.,” which is, says the author, “all once again paid for by the British taxpayer” while the “open borders Left portray this as absolute hell.”

The author naturally chose to ignore the despair being voiced by the migrants – some of whom have fled war-torn Syria and other dangerous nations – being housed at detention centres scheduled for deportation ahead of the first flight. One individual said he was ‘devastated’ when told he is to be removed on June 14 and has had suicidal thoughts as a result. Other migrants due to be deported have been on hunger strike as they struggle with severe mental health conditions.