In flooring critics in the corporate media with a down-to-earth, no-nonsense attitude, the RMT boss has become the star of the rail strikes and has something of a cult following. 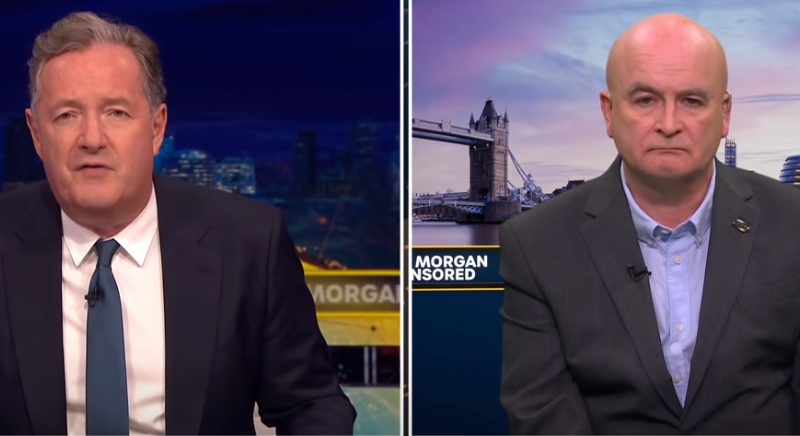 Here are Lynch’s top five TV performances of the week.

In a fiery clash with Kay Burley on Sky News, Lynch accused Burley of asking questions “verging on nonsense.”

The Sky News host asked the GMB leader what the union would do if agency workers hired by the government attempted to cross a picket line to take up posts left by striking workers.

To which Lynch coolly responded: “Well we will picket them, what do you think we’ll do? We’re in a picket line and we’ll ask them not to go to work. Do you not know how a picket line works?”

Burley responded somewhat weakly: “I very much know how a picket line works, I’m much older than I look, Mr Lynch. What will picketing involve.”

Turning to a group of striking workers at Euston Station behind him, the union boss said: “You can see what picketing involves. I can’t believe this line of questioning.”

The interview was described as “utterly desperate” by Kay Burley but turned into “pure comedy gold by Mike Lynch.”

When appearing on the ITV breakfast show to discuss the rail strikes, host Richard Madeley opened the interview by asking the union boss if he was a Marxist.

“Are you, or are you not a Marxist? Because if you are a Marxist, then you’re into revolution and into bringing down capitalism. So, are you or aren’t you?”

Laughing, Lynch replied: “Richard, you do come up with the most remarkable twaddle sometimes, I’ve got to say. Opening an interview with that is nonsense.”

“Woah, woah, I didn’t say you are a Marxist,” Madeley retorted. “I’m saying that you are being accused of being a Marxist and that’s called reporting.”

Viewers were shocked by Madeley’s opening question, with one writing: ‘It doesn’t even make me angry anymore, it’s just cringe-making.’

‘What sort of question to start is that?’ another said.

Another brutal putdown by the RMT boss, involved Piers Morgan attempting to rattle Mick Lynch during an interview on talkTV by choosing to discuss the union leader’s choice of Facebook profile picture – the Hood from Thunderbirds.

“I’m just wondering where the comparison goes because he was obviously an evil criminal terrorist mastermind described as the world’s most dangerous man,” Morgan suggested.

To which Lynch calmly responded: “He’s the most evil puppet made out of vinyl in the world. Is that the level journalism is at these days?”

An increasingly flustered Piers Morgan asked Lynch why he would use such an evil person as a likeness. To which he said: “I think it’s quite funny,” referencing to the similarity in their appearance before checking if Morgan would like to ask any real questions about the strike.

The interview was branded ‘bizarre’, with viewers pointing to the fact that Mick Lynch had to explain to Piers Morgan that Thunderbirds isn’t real.”

On ITV’s flagship political show, Peston, Lynch came head-to-head with Tory MP Robert Jenrick, who attempted a fresh line of attack on the union boss, saying: “You’ve lost 20% of the passengers on the railway since Covid.”

To which Lynch calmly clarified: “I haven’t lost them, Covid did.”

Ignoring this comment, Jenrick claimed: “We need to encourage those people back. The worst way to do that is by alienating people, going on strike, making their lives much more difficult.”

Not holding back, Lynch replied: “The worst way you could do it is by insisting the fares go up by RPI [Retail Price Index], ripping off the commuters, but you won’t give the workers RPI.

“The fares go up by RPI every year, the Retail Price Index. That’s the government regulations.

″Last year, profits were made by the train operators – £500 million out of that subsidy you gave went to those companies.

“First Group and Go Ahead, who we’re negotiating with, are both subject to takeovers from private equity companies.

“They’re going to be worth billions because they know you’re going to keep siphoning money from the public purse into private sector operators.

The Tory backbencher struggled to find a response, saying: “What’s actually been happening for the last two years is that in effect large swathes of the railway has been struggling. So the idea that this is siphoning profits to the private sector is ridiculous.”

The clash was met with further adulation for Mick Lynch on Twitter, with one user writing: “The best thing about Mick Lynch devouring various Tories and interviews on the telly is the way he does it with the insouciance of a man shelling peas.”

On BBC Question Time, Tory MP for Redditch Rachel Maclean produced a Network Rail letter to the RMT union. Maclean clamed the letter gave a guarantee of ‘no compulsory redundancies’ before reading it out and proving it didn’t.

Once again, the Twittersphere went into overdrive with support for the union boss. One user wrote: “Mick Lynch exposes UK gov as liars live on Question Time over compulsory redundancies and Tory MP Rachel Maclean read out the evidence that backed Mick up. Lol.”