Armed with buzzwords and cliches, the right-wing newspaper does not hold back in firing a loud and brazen attack on ‘woke’ culture. 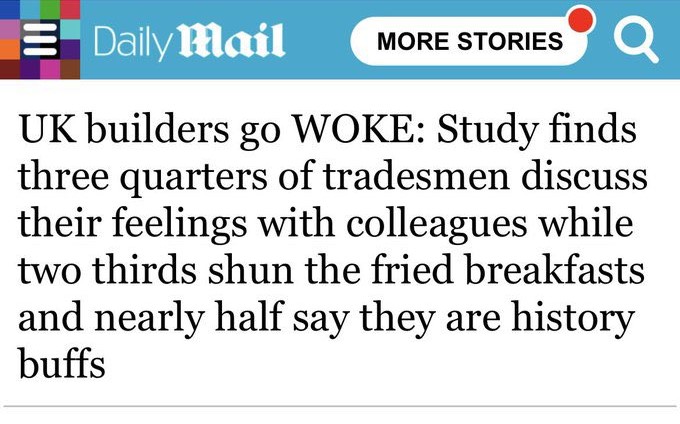 This week has seen presenters in the corporate media floored by the straight-talking attitude of RMT boss Mick Lynch in discussions about the rail strikes.

In the wake of somewhat bizarre lines of questioning being thrown at the union boss by the likes of Piers Morgan and Richard Madeley, the direction of British journalism has been questioned.

We look at how an anti-progressive, anti-woke rhetoric is being peddled by the right-wing media. And none more so than in the Daily Mail.

Here are several especially bizarre assaults on ‘wokeism’ hawked by the right-wing paper.

On June 19, the Mail published a truly bemusing article seemingly ridiculing builders in Britain for ‘going woke.’ Readers were pointed to a poll of 2,000 builders which instead of being ‘wolf-whistling white van men devouring greasy-spoon breakfasts and discussing sport as radios blare out inan pop music,’ are ‘sensitive souls more likely to enjoy yoga, muesli, listening to Radio 4 and sharing their feelings.”

Because of their penchant to enjoy reading, follow history and politics, shun fried breakfasts, and discuss emotions with colleagues, Britain’s builders are, according to the right-wing paper, WOKE!

The article was naturally ripped apart online, with readers sharing their bewilderment at even the Daily Mail going so low.

“Give that suicide is one of the biggest killers of men, the fact they are discussing their feelings is a very good thing,” wrote one reader.

Three days after the attack on ‘woke builders’, the Mail focused its culture war on the NHS. The article points to a Tory ex-minister who revealed how woke issues were ‘mentioned three times as often as ‘patients’ in an NHS review.

The piece relishes in telling readers how former Thatcher cabinet minister Peter Lilley ‘blasted the report into NHS management’ for mentioning the ‘woke’ strategy of Equality, Diversity and Inclusion (EDI), ‘three times as often as patients.’

It proceeds to inform readers of how health secretary Sajid Javid, who ‘has vowed to stamp out ‘waste or wokery’ in the NHS and social care, even ‘accepted the report in full.’

Not all Mail readers were won over by the anti-woke sentiment of the article. One wrote: “Hang on. A government report, conducted by an army general, comes up with some recommendations the Government don’t like so it’s dismissed as woke. Like the builders are now woke if they don’t eat a fry up. It’s like a parody of a newspaper these days.”

Woke Britain? We’re among the most anti-PC in the world!

This piece in the Mail from June 2021 is centred on the findings of a survey, which suggests Britons are among the “world’s most anti-PC populations.”

Relishing in telling readers that “woke warriors won’t like the sound of it,” the Mail points to how 51% of those surveyed rated their views on political correctness between nought and three, “ranking this country as one of the nation’s most against political correctness.” The author continues that “only 32 per cent of Britons believe ‘culture war’ divisions – revolving around supposedly insulting history and opinions – are a problem in the UK.”

A report by the Centre for Labour and Social Studies (CLASS) also underscores how ‘anti-wokeness’ is weaponised by the government’s right-wing media cronies as a distraction tactic from issues like government corruption and the cost of living crisis.