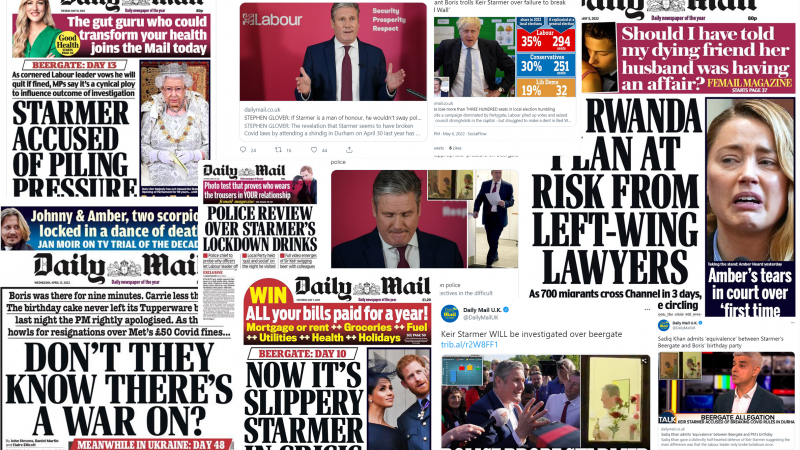 Cummings has been engaging in what seems like a personal vendetta with Boris Johnson since being sacked as Number 10 advisor in November 2020. The former Vote Leave director told human rights lawyer Adam Wagner that “Newspapers negotiated direct bungs to themselves with him [Boris Johnson]”.

This bung seems to refer to money given to members of the News Media Association (NMA) in April 2020 as part of an advertising campaign about Covid-19 which was due to initially last for three months. Byline Times reported that the funding was budgeted at £35 million for the first three months but appears to still be ongoing.

Although the beneficiaries of the funding include NMA members The Mirror and Guardian, the biggest beneficiaries are the large right wing news groups like the Mail group, Murdoch’s News Corp, and the Telegraph group. The funding was explicitly a subsidy to support the newspaper industry, and some of the stories placed in the publications “involved praise for measures taken by the Government”, according to Byline.

However, this funding is just one of a number of favours the government has done for its friends in the media in recent years. Other actions include ending Rupert Murdoch’s obligation to not interfere in the editorial line of the Times and Sunday Times, exempting newspapers from provisions in the Online Safety Bill about disinformation, promising to reform privacy laws, freezing the BBC’s funding, making it harder to sue newspapers for libel and blocking the Leveson 2 inquiry.

The absence of transparency around government communications, much of which is done via encrypted private messenger, means that it becomes harder to investigate whether any kind of deal exists between the government and billionaire press barons. However, the appearance of favours that largely benefit the right wing press raises serious questions about the power of newspapers which usually take a pro-government line.

The day after the Conservatives lost almost 400 council seats at last week’s local elections, the Daily Mail was still running with its campaign to try to make ‘beergate’ a thing. The publication ran with the story for almost two weeks, pointlessly trying to equate Keir Starmer’s after work curry with multiple Downing Street parties attended by dozens of people.

On May 10, the Mail attempted to keep the story going by reporting that an office party had been planned in Christmas 2020 by the Labour leader’s office. The party was then cancelled when London was moved up to Tier 3 of lockdown restrictions. They published a comment article called ‘Keir Starmer’s real crime is screaming hypocrisy’, because obviously the former Director of Public Prosecutions hasn’t actually committed any real crimes they can pin on him.

Meanwhile on May 12, the Metropolitan police issued 50 more fines for people who attended parties in Downing Street.

Since former Mail editor Paul Dacre came back to run DMG Media, the Mail’s parent company in November 2021, the paper has been valiantly attempting to shield the Prime Minister from the consequences of his own mistakes. In January 2022, they were urging Starmer to say sorry for having a beer while telling others to ‘move on’ over Partygate.

You usually expect the media to hold the government to account, rather than bend over backwards to excuse its failures and ceaselessly attacking its critics. The Beergate coverage in particular has led the Mail into some bizarre contradictions of its own, repeatedly suggesting Starmer should resign over Beergate, and then accusing him of “piling pressure on police” for pledging to resign if fined over the incident.

Of course there doesn’t have to be any kind of deal between the government and right wing press at all for tabloids like the Mail to know which side their bread is buttered on. The Mail’s print circulation has fallen dramatically in recent years, along with most print media. Adrian Addison, whose history of the Mail I have been reading, says that its print circulation was 1,442,924 copies a day in 2017. In March 2022, it had fallen to 875,125. That is a decrease of almost 40%.

Of course the Mail Online’s reach is still huge, but its political influence is tied to its closeness to the Conservative Party, and these links are reinforced by the revolving door between government and the right wing media. Theresa May hired the Daily Mail’s James Slack as her chief spokesperson in 2017. Boris Johnson also hired the Mail’s Jack Doyle as his press secretary.

A free, independent press that holds the government to account is an absolutely key element of any functioning democracy, and I doubt many right wing journalists would disagree with that. But can we say that the UK has a healthy press sector at the moment, with such a cosy relationship between the government and right wing media?

Over the course of the past few years, a government led by former journalists like Johnson and Gove has seemingly gone out of their way to do favours for their friends in the media. Boris Johnson even tried to make Paul Dacre the chair of broadcast regulator Ofcom. Dacre only pulled out of the contest to run the body when it became clear that he couldn’t stack it with his own cronies, and that those working under him would be independently appointed.

The UK deserves a government which believes in a free press, is willing to legislate to encourage more media diversity and better regulation of press standards, and doesn’t cosy up to billionaire press barons. Just four men (Murdoch, Lebedev, Rothermere, Barclay) own 63.5% of the UK’s print media, while Murdoch’s News Corp met with ministers 40 times in the first 14 months of Johnson’s government.

An oligarchic media sector that produces client journalism for a government that constantly returns the favour is bad for British democracy. Britain deserves a government that has not become a plaything of billionaire press barons.