The conspiracy theory-promoting event was attended by figures like Laurence Fox, Tommy Robinson and John Mappin. 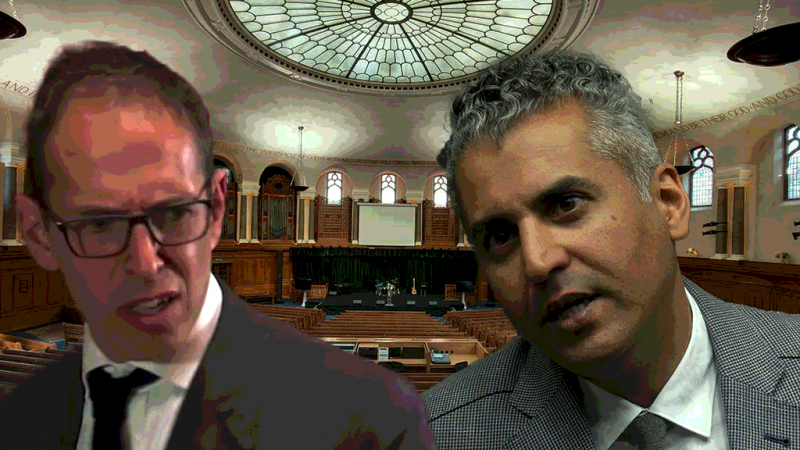 Last Friday, my favourite right wing conspiracy theorist podcaster, James Delingpole, did a live event in London with former LBC radio presenter Maajid Nawaz. Lots of other big names in right (and far right) wing media and politics were there, like Laurence Fox and Tommy Robinson.

The event shows that a number of groups on the Right are coalescing around a shared set of talking points which encourage scepticism of generally accepted narratives on the Ukraine war, the pandemic, Trump, and climate change. These groups promote distrust of institutions which have frozen out people with their fringe beliefs, and they are trying to form their own media networks to distribute their content and make money.

I was briefly considering going to it myself, but tickets were £30 and that will buy you at least three pints in a London pub these days so I decided to waste my money that way instead. The event was sponsored by CAR26, an anti-climate science group set up by Lois Perry around the time of COP26. Like Nigel Farage they support a referendum on Net Zero.

According to DeSmog, “Perry is the director and sole shareholder of CAR26, as well as the South East representative of the Reclaim UK party, led by actor Laurence Fox”. Perry, Fox and former Brexit Party MEP Lance Forman appeared on a panel together at the Delingpole event. CAR26’s website was also managed by communications company Blue Sky Strategy, which is run by a number of pro-Brexit figures.

James Delingpole is an increasingly wild conspiracy theorist. Listening to his podcast, he repeatedly calls things like 60s counterculture, ‘a psyop’, calls vaccines ‘the clot shot’, and rails against the New World Order and people like Klaus Schwab and the World Economic Forum. Maajid Nawaz has been going on his own political journey, from Lib Dem MP candidate in 2015 (he lost) to LBC radio host (he was forced out), to a reactionary defender of Donald Trump.

Nawaz was the founder of anti-extremism think tank Quilliam, which was criticised for taking UK government money and for its failed efforts to deradicalise Tommy Robinson, who ironically also attended this event. Quilliam closed in 2021, but had been influential in helping develop the government’s controversial Prevent strategy.

Quilliam’s strategy was criticised for concentrating on Islamist terrorism, while often ignoring far right terror threats. AlJazeera noted that “for 13 years Quilliam reinforced the idea that Muslims are a suspect community and supported the draconian “counter-terrorism” policies being pushed by the government.”

Sometimes reading Delingpole’s Tweets is like playing conspiracy bingo, his apocalyptic visions built entirely out of paranoid buzzwords gleaned by osmosis from the darkest corners of some reactionary 4Chan forum. He uses QAnon phrases like ‘the great awakening’, and predicts a ‘coming global famine’ caused by ‘the deep state’.

I’ve always found the use of ‘deep state’ discourse interesting because it originated in Turkey, a place I’ve lived and written about a lot. It speaks of a particular kind of ‘paranoid style’ as Richard Hofstadter famously called it in the 1960s, which has often been a key component of populist politics.

Other interesting attendees included John Mappin, the QAnon hotelier and supporter of Turning Point UK, an organisation whose launch event Delingpole attended. He tweeted a video of Nawaz saying “I know extremism. For 10 years, the world’s prime ministers were calling me to help them understand extremism.” Mappin said on Twitter that Nawaz was “on a divine mission”, among retweets of Scientology and 9/11 conspiracy theory content.

Nawaz says that the media is concealing that the Azov battalion in Ukraine are Nazis, and that funding the Ukrainian forces is therefore no different from funding ISIS in Syria when they were fighting against Russia. Nawaz also called Ukraine’s President Zelenskiy a “corrupt thief”. The comparisons between him and someone like Alex Jones, the Infowars host who made millions from grifting off US-based conspiracy theorists, are somewhat apt.

Since being fired by LBC for his increasingly bizarre pronouncements, Nawaz has started his own substack where he does the usual discourse about the ‘Globalists’ in charge of everything.

Likewise, Delingpole has his own self-published media network on websites like Locals, Podbean, YouTube, and numerous other places where his vaccine sceptic, QAnon adjacent community can pay to consume his content.

One thing I think it’s important to remember is how unseriously Delingpole is taken by other mainstream right commentators. Although he is still platformed by the Spectator, where he is the TV critic, writing about Netflix’s Jimmy Savile documentary, he doesn’t seem to have written for the Telegraph since 2018.

He did get to promote his event with Nawaz on The Conservative Woman, another anti-climate science website which publishes articles from the climate-sceptic Tufton Street think tank, the Global Warming Policy Foundation.

Yet he seems to delight in alienating other right wingers like Iain Dale (‘the cuck’s cuck’), or telling Julia Hartley-Brewer to enjoy her holiday before the engineered global famine destroys everything.

Delingpole and Nawaz have been talking about doing a podcast together since last November, when their vaccine scepticism was making them both somewhat toxic for a lot of mainstream media and Delingpole was doing things like calling David Icke a ‘visionary genius’.

The two men were also among the few people in the UK media to support Trump’s claim that the 2020 election was stolen from him. Little wonder then that their event attracted people like one of the guys from conspiracy-pilled 80s group Right Said Fred, and Stephen Yaxley-Lennon (Tommy Robinson).

It’s probably easier for Delingpole to talk to people who agree with him than to have a real debate, like the time he complained of being ‘intellectually raped’ by the President of the Royal Society in a 2011 interview about climate change.

Clearly there is money to be made on the paranoid, conspiratorial fringes of mainstream right politics. Commentators like Nawaz and Delingpole also perform roles as vectors of more fringe conspiracy beliefs into the mainstream right, writing for well known publications like The Spectator, and at the same time having Tommy Robinson attend their events.

Covid-scepticism and QAnon showed there is an audience for conspiracy content on the mainstream right. The question is whether these kind of fringe networks can influence mainstream right discourse and pull it even further to the right.