75% of stories that appeared in the Daily Mail with NHS in their title over the past month were found to be negative. 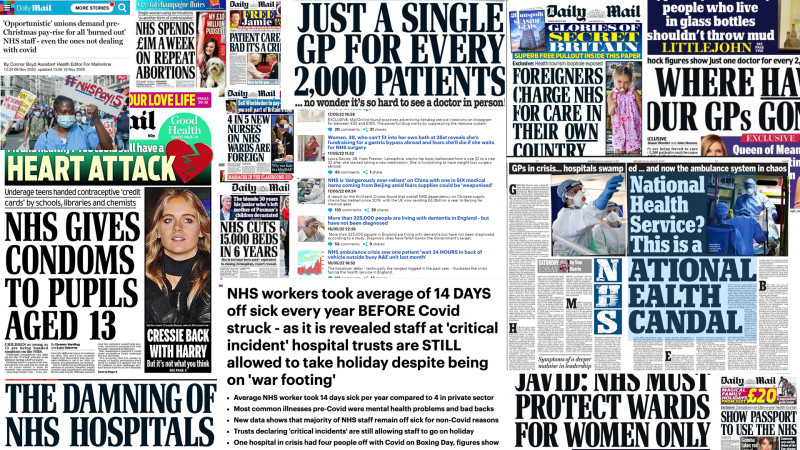 Public satisfaction with the NHS is at a 25 year low, according to data from The King’s Fund. Despite an increase in direct government funding to the NHS due to the Covid-19 pandemic, pressures on the service and real terms funding cuts mean that the size of the private healthcare market is steadily increasing.

Google Trends shows that searches for ‘private healthcare’ in the UK reached an all time peak of popularity in February 2022.

A report by GlobeNewswire on private healthcare in the UK says that the market was “estimated to be worth £6.17 billion in 2019.” Although the market contracted by 30% at the start of the pandemic, the government gave financial assistance to many UK private health companies in the form of pandemic contracts.

Without most people realising it, private healthcare companies are taking over the running of large parts of the NHS, as commissioning bodies are forced by legislation to tender contracts to the private sector.

You may never have heard of companies like Nuffield Health, HCA, Spire, BMI, and Ramsay, but they win contracts from the government worth billions every year. Big framework contracts such as this £10 billion ‘NHS Increasing Capacity Framework’ contract are awarded to sets of approved companies from whom they can later commission particular services.

I have personally noticed an uptick in TV adverts for these private medical companies, and it seems that I am not the only one.

Companies often specialise in particular areas, which mean they can effectively develop a monopoly on providing those services to the NHS. The head of one private company providing mental health services on the NHS told me that “I have huge respect for the NHS and a deep desire to help make it work, however, I do not think that it is capable of innovation in the way that someone like me can make happen.”

This provider claimed that they had reduced the cost of treating patients by 50%, which would save the taxpayer money. While this may be true, this cost cutting is only the case because the NHS is being severely underfunded compared to its needs. In turn this lack of funding is reducing the quality of the service and providing a steady stream of bad news which can be reported by the right wing press to further undermine trust in the NHS.

Private companies which got pandemic contracts, such as Randox Laboratories, now advertise all over the London underground network. Randox won at least £600 million in pandemic contracts, according to data on Covid-19 contracts I worked on for investigative journalism group The Citizens. Tory MP Owen Paterson, who was employed as an advisor by Randox, had to resign after it was found that he had broken lobbying rules by contacting the Food Standards Agency on behalf of Randox.

At the same time as underfunding of the NHS is leading to huge waiting times for treatment, private companies who are already profiting from contracts to provide NHS services, are increasingly gaining a larger share of the healthcare market. Meanwhile, the right wing press continues a steady stream of attacks on the NHS, in some cases even openly promoting private healthcare as an alternative.

On Tuesday, Good Law Project director Jolyon Maugham Tweeted that he noticed a surge in attacks on the NHS by right wing media outlets, particularly the Sun.

To see if I could quantify this in any way, I looked at a sample of articles which had ‘NHS’ in their title from the Daily Mail archive, 100 of the most recent articles from April-May 2022, and 100 articles from February-May 2010. I then assigned these articles a sentiment of either positive, neutral or negative in their attitude towards the NHS. You can see this data here.

The first thing to note was an increase in frequency. There are more articles being published about the NHS now by the Mail than there were 12 years ago. The number of negative articles has not changed that much. In the sample I chose, 88% of the 100 articles from 2010 had a negative view of the NHS, which may have also been affected by that period covering the months before the 2010 general election. This dropped to 75% in 2022, but there were still more negative articles published due to the increase in frequency.

The content of the 2010 articles was heavily skewed towards articles about NHS waste, claiming that huge sums of money were being paid to bureaucrats and consultants, or being lost to fraud, often by foreign nationals. I made a word cloud out of the headlines of all these articles to see the most frequently used words.

The main differences between the keywords that appear are the emphasis on waste and Labour’s record in 2010. In 2022, we don’t see much criticism of the Tories for the state of the NHS, just constant stories about how bad the NHS has become, with no explanation about why.

There were more articles that recommended private healthcare as an option in the 2022 articles, with one in particular almost reading like an advert for it. Under the title “MoS private health care special: Should you shell out to beat the NHS waiting list crisis… although the answer might surprise you”. The article promoted the idea that private healthcare is affordable, saying, “The surprising truth is, private healthcare might not be as out of reach as you think”.

There is a striking development to Mail articles about the NHS in 2022 compared to 2010. Twelve years ago, the main theme of the articles was that the Labour government were wasting money on bureaucrats (e.g. NHS wasting millions on treating the ‘worried well’, NHS waste betrays our cancer patients). They also argued that the Tories could run the NHS better, saying Labour was ‘no longer the party of the NHS’. And there were constant stories about bad behaviour by NHS staff.
Fast forward to 2022 and the theme has evolved to criticising the NHS for its poor service and long waiting times. The Mail campaigned for cuts to the NHS (‘Cut hospital beds and you can improve the NHS’, 17 March 2010), and now blames the NHS for poor service. You’d be forgiven for thinking this was a cynical tactic used by billionaire newspaper owners who oppose free, universal access to healthcare and want to see it defunded and sold off to private companies.