Clearly not a personal attack on the Queen or her grandson, the booing of the national anthem at the FA Cup final illustrates wider societal issues, and Liverpool’s inability to forget what Johnson did, help “smear this city in the worst possible way.” 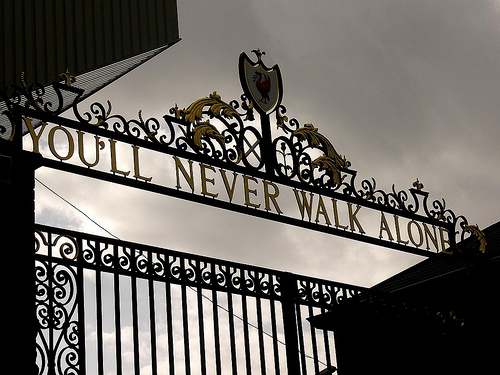 The booing of the national anthem by some Liverpool fans at the FA Cup final sparked controversy and debate, triggered, in part, by Jurgen Klopp’s comments that fans would not have jeered God Save the Queen or the Duke of Cambridge “if there was not a reason.”

Reasons behind the fans’ rejection of ‘blind patriotism’ and the establishment go deeper than concerns over welfare and that the city is in the grip of a ‘food and poverty emergency.’ Disdain towards the national anthem on Merseyside can be traced to the fallout between the people of Liverpool and the establishment in the aftermath of the Hillsborough disaster, which drove a wedge between the city and the rest of the country.

Boris Johnson has faced the full force of Liverpudlian indignation for his involvement in an article, which has been described as having “managed to offend a whole city.”

We look at the reasons why the people of Liverpool cannot shake off their resentment of Boris Johnson.

In 2004, the right-wing magazine The Spectator published an editorial that said Hillsborough was “undeniably” a tragedy, but repeated the allegation made by the Sun – which is still boycotted in Liverpool – that “drunken fans” might also have been to blame for the Hillsborough disaster, in which 97 people lost their lives.

Both the Taylor Report in 1990 and the inquest into the Hillsborough disaster in 2016 rejected claims that drunken fans were to blame.

Despite this, the now infamous article read:

“That is no excuse for Liverpool’s failure to acknowledge, even to this day, the part played in the disaster by drunken fans at the back of the crowd who mindlessly tried to fight their way into the ground that Saturday afternoon.

“The police became a convenient scapegoat, and the Sun newspaper a whipping-boy for daring, albeit in a tasteless fashion, to hint at the wider causes of the incident,” it continued.

The editorial proceeded to talk of the attitude of the people of Liverpool, adding:

“They see themselves whenever possible as victims, and resent their victim status; yet at the same time they wallow in it.”

Whilst the article was not written by Johnson himself – it was penned by former Daily Mail columnist Simon Heffer – the PM was editor of the magazine at the time, and had approved the piece for publication.

Following the publishing of the article, Johnson attempted to offer an apology. Described by the author as “Operation Scouse-grovel,” the next edition of the Spectator featured a piece that read: “Whatever its mistakes of facts and taste, for which I am sorry, last week’s leading article made a good point: about bogus sentiment, self-pity, risk, and our refusal to see that we may sometimes be the authors of our misfortunes.”

As the Independent notes, Johnson’s attempted apology piece is “as obscene as the previous editorial.”

Adding to the resentment felt in Liverpool over the article, was Johnson’s refusal to apologise for the editorial when pressed about it in July 2019 by Maria Eagle, Labour MP for Garston and Halewood. Eagle, who was a leading figure in supporting the Hillsborough victims and families, challenged Johnson to apologise in the House of Commons.

“He said he wants to govern for the whole of the country, but in a previous role the Rt Hon Gentleman has accused my constituents of wallowing in their victim status, repeated offensive and proven untruths about the cause of the Hillsborough disaster and called Liverpool self-pity city,” said Eagle.

“So will he now apologise from the dispatch box to the people of Liverpool for the offence that he has caused?” she added.

The response was branded “brazen and rambling” by the Liverpool Echo.

Failing to face his critics in Liverpool

In October 2019, Johnson was criticised for failing to face his critics in Liverpool. Instead of meeting the then Irish PM Leo Varadkar in the city of Liverpool for crunch time Brexit talks, Johnson swept into the ‘neutral’ venue of a country hotel, 30 minutes outside of the city.

Among the critics of what was perceived a cowardly move, was the then Liverpool mayor Joe Anderson, who described Johnson as “skulking in and out” of the region for his meeting with the Irish PM.

“He’s pretty cowardly to skulk in and skulk out again,” said Anderson. “As prime minister, he can’t stay away from Liverpool. I think he should man up and accept the fact that if you do something wrong, that you should apologise then make amends.”

The city’s mayor was not the only one who was offended by Johnson’s failure to face the people of a city who hold him in rebuke for approving the publication of The Spectator article. Citizens of Liverpool voiced their discontent at Johnson’s presence, if not a cowardly one, in the region.

“He has insulted this city on so many occasions and he is not a fit person to be running the country. He is offensive, he has insulted us. We are not the only ones he has insulted, but he should stay away from Liverpool,” said Graeme Burnley, a teacher on Merseyside.

Anger towards Johnson is reflected among voters in Liverpool. While the 2019 general election saw Labour heartlands across the country turn into Tory gains, Liverpool bucked the national trend, maintaining its standing as an “island of red seats in a sea of blue.”

Following Johnson’s election victory, Liverpudlians took to Twitter to speak of how proud they are to be from Liverpool following Labour’s victory in the city, armed with the viral hashtag #scousenotenglish.

In clinging to a ‘scouse not English’ mentality, the recent booing of the national anthem among some Liverpool fans at Wembley ahead of the FA Cup Final against Chelsea, could be seen as nothing spectacular or out of the ordinary. As Liverpool boss Jurgen Klopp said, fans would not have booed the national anthem “if there was not a reason.”

The hypocrisy of the Mail’s stance on booing at football matches didn’t go unnoticed, with tweets reminding of a previous article in the newspaper that said people have the right to boo players in response to Priti Patel’s comments that she does not support England players taking the knee in protest of racism.

The jeering of the national anthem before the FA Cup final proves what the Liverpool Echo wrote during the 2019 general election campaign, Liverpool won’t forget what Boris Johnson did, helping “smear this city in the worst possible way.”

Summing up the sentiment felt about the booing by much of the left, trade unionist Howard Beckett tweeted: