“Your Reminder of just how bad the #DailyMail are." 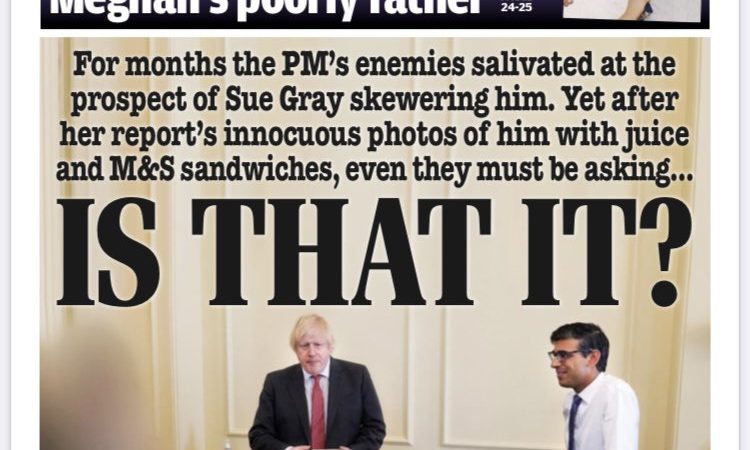 The Daily Mail has been ridiculed for its front page, where it downplayed Covid rule breaking at the heart of Downing Street.

For weeks, the paper launched hysterical and hypocritical attacks on Labour leader Keir Starmer, even though he has not been found to have broken any rules after being pictured drinking a beer while sharing a takeaway meal with party colleagues, at the end of a day spent campaigning for the council elections last year.

The paper demanded that the police investigate Starmer, only to hypocritically then go on to accuse him of pressuring the police when he pledged to resign if he was found to have broken the rules.

You just can’t win with the Mail.

Now that the Sue Gray report has been published, which exposed the sheer scale of rule breaking in Downing Street, complete with photos and clear-cut evidence that those at the heart of government who had imposed some of the strictest restrictions on people’s freedoms to protect the NHS and save lives, had refused to follow the rules themselves, the Daily Mail sought to downplay the findings.

Despite the Gray report finding that advisers knew they were breaking the rules, brazenly gloating about how they had gotten away with it, with wine spilled on walls, to a brawl between aides and some revellers getting so drunk they vomited, the Daily Mail’s front page headline reads: “IS THAT IT”.

One social media user wrote: “Your Reminder of just how bad the #DailyMail are.

“10 front pages on Starmer for doing something that didn’t break the rules. Using a months old photo.

Another wrote: “I think the saddest part is there are Daily Mail readers who lost loved ones, who couldn’t see dying relatives in hospital, or say goodbye at funerals, looking at this front page and nodding along and still thinking “well, he’s doing his best”.

The Private Eye meanwhile tweeted: “As the Daily Mail continues to play down Boris and his gang’s boozing (and have hysterics over Keir Starmer’s dinner), the new Private Eye has yet more details about the paper’s own hacks flouting covid rules – and even awarding prizes to each other for doing so! In shops now.”