Is the launch of the anti-Net Zero group intended to be a distraction from Farage’s Putin links and sympathies, a desperate bid by the former UKIP leader for relevance - or a bit of both? 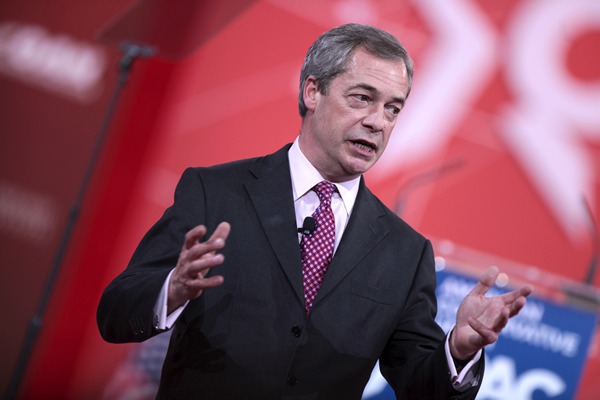 As the scale of destruction at the hands of Russian forces worsens in Ukraine, and millions of Ukrainians are displaced from their homes, Nigel Farage – never to be outdone in the attention stakes – launches a new campaign.

On March 5, Farage took to Twitter – his favourite portal for communication – to announce the launch of a political movement to campaign for a referendum on the government’s Net Zero policy to decarbonise the economy by 2050.

The campaign goes under the name of ‘Vote Power Not Poverty’ and mimics the memorable and highly successful ‘take back control’ slogan of the Leave campaign during the EU referendum, with ‘Let’s take back control of our energy policies and prices!’

The group claims to be cross-party but as far as we can see it seems to be made up of the usual climate denier suspects, including Richard Tice, who also tweeted the Mail on Sunday’s report, and is merely a project of Reform UK – the right-wing populist party of which Tice leads.

The launch of the Brexit-style campaign to fire up British coal mines and start drilling for shale gas in the UK has been slammed, with critics saying it would only make Britain more dependent on oil, at a time when, with the Russian invasion of Ukraine, calls are being made for the UK to become more energy independent and move towards a greener economy.

The timing of the ‘big launch’ of Farage’s Brexit-style anti-Net Zero campaign should not be overlooked. It could be argued that the project is being used as a suspiciously convenient distraction to stop us focusing on the former UKIP leader’s Putin links and sympathies.

Russian interference in the 2016 Brexit referendum has been widely speculated.

In 2020, a long-anticipated Russia report from Parliament’s Intelligence and Security Committee, which oversees the work of UK intelligence agencies, was finally published. The report was the first public examination by a parliamentary committee of, as Foreign Policy notes, Moscow’s efforts to use disinformation, malicious cyberactivity and the influence of wealthy Russian expatriates to manipulate British politics. While it did not specifically address the Brexit campaign, the report provides a critical evaluation of the UK government’s failure to assess Russian attempts to influence the Brexit vote. It describes Russian interference in the country as “the new normal.”

Nigel Farage’s associations with Arron Banks, the millionaire businessman who bankrolled the former UKIP leader’s campaign to leave the EU, cannot be ignored. According to documents seen by the Observer, Banks had multiple meetings with Russian embassy officials in the run-up to the Brexit referendum.

Banks donated £12 million of services to the Leave campaign, becoming the biggest donor in UK history. The millionaire has repeatedly denied any involvement with Russian officials, or that Russian money played a part in the Brexit campaign.

An investigation by Channel 4 News into Nigel Farage’s secret Brexit funding says Farage has consistently defended Banks, claiming that the allegations surrounding his business deals, his campaign and his relationship with Russia are “unfounded.”

Farage names Putin as his ‘most admired’ leader

In 2014, when Russia invaded and annexed Crimea, Farage, who was the UKIP leader at the time, named Vladimir Putin as the world leader he most admired. Talking to GQ magazine in an interview by Labour’s former director of communications, Alastair Campbell, Farage said  that while he did not approve of Putin’s annexation of Crimea, EU leaders had been “weak and vain”, adding: “If you poke the Russian bear with a stick he will respond.”

When asked which world leader – at the time – he most admired, Farage replied: “As an operator, but not as a human being, I would say Putin.

“The way he played the whole Syria thing. Brilliant. Not that I approve of him politically. How many journalists in jail now?”

When faced by criticism over his comments, Farage later claimed that he had been ‘mildly misquoted’ in the interview.

On the day that Putin officially announced Russia’s invasion of Ukraine, Farage took to Twitter to, like he had done previously in his interview with Alastair Campbell, blame the EU and NATO on the conflict, saying “it made no sense to poke the Russian bear.” Nowhere did the former UKIP leader seek to express solidarity with the people of Ukraine or reprimand Putin’s aggression.

With Brexit accomplished, Farage’s launch of his anti-Net Zero campaign could have a number of motives – asides to whip up support for fossil fuels – to divert from his associations as a far-right Vladimir Putin cheerleader and to lobby his image as the great disruptor and to garner the relevance he constantly craves.

As the New European notes, Michael Crick’s recent biography on Farage titled ‘One Party After Another’, is worthy of a read, which demonstrates how the former UKIP leader doesn’t believe anything beyond the fact he should get a lot of attention.