Migration Watch has suggested that while Ukrainian refugees are worthy of protection, those arriving on boats are 'scammers'. 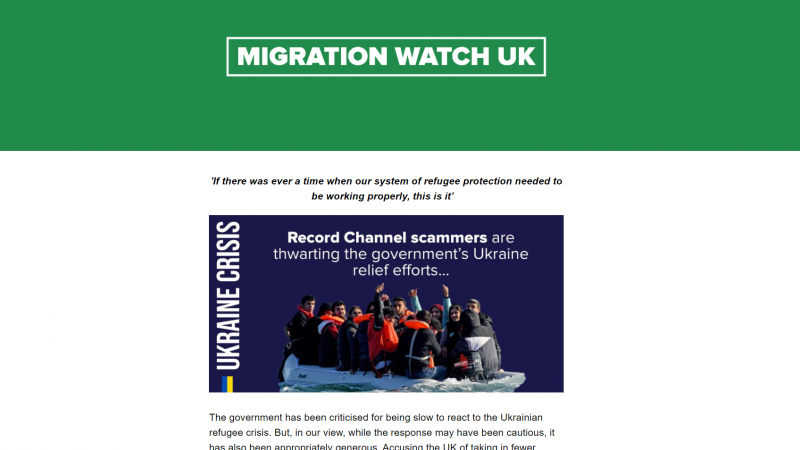 The right wing think tank, based at 55 Tufton Street in London, claims to be supportive of ‘genuine’ refugees like those fleeing the war in Ukraine. Their recent newsletters have titles like “Ukraine response marred by asylum abuse”, and argue that “the fact that asylum abuse is rife, taking up resources that could be used for those in genuine need, is utterly outrageous.”

This clearly puts Ukrainian refugees and those from other countries in opposition to each other, suggesting that, unlike Ukrainians, the thousands of people who have attempted channel crossings to claim asylum in the UK in the past few years, are somehow not genuine refugees.

This is clearly nonsense, as data from the Refugee Council showed that 91% of people who crossed the Channel in small boats came from 10 countries where human rights abuses were common: Afghanistan, Iran, Syria, Iraq, Sudan, Vietnam, Kuwait, Ethiopia, Eritrea and Yemen.

The Refugee Council’s report, published last November, found that “for the top 10 countries of origin arriving by small boat, 61% of initial decisions made from Jan 2020 to June 2021 would have resulted in refugee protection being granted. This compares to a grant rate of 52% for decisions made for all nationalities in the same period.”

“Closer analysis of the quarterly data shows that the percentage of cases granted protections at initial decision stage varies across the top 10 nationalities of people arriving by small boats, from a low of 21% for Ethiopians to a high of 88% for Syrians”.

Migration Watch has a history of making exaggerated claims about migration. In 2019 they withdrew a report which claimed that net migration could rise to 380,000 a year after Brexit. They’ve also made false claims about benefit tourism and the cost of migration to the UK taxpayer.

Migration Watch was founded in 2001 by Lord Greene of Deddington, a former ambassador to Saudi Arabia, and its current chairman is Alp Mehmet, former ambassador to Iceland. Mehmet came to the UK in 1956 as a British citizen from Cyprus at the time of the Cyprus Emergency. In 2021 he wrote an article for the Daily Mail titled ‘I back Priti Patel’s crackdown on migrants’.

On Nigel Farage’s GB News show, Mehmet told the presenter “immigration and controlled immigration is nothing to do with race as such”, and argued that if Britain accepts too many migrants, it will not be possible to integrate them all.

This is quite a different argument from the ‘worthy migrants vs unworthy migrants’ argument which Migration Watch is currently using to say that of course British people are very generous and will be able to accept lots of worthy Ukrainian refugees, but only if we stop the unworthy ones arriving on boats.

There’s nothing that means Afghan refugees need to be treated any differently from Ukrainian refugees, as they have both come from clearly war torn countries. The fact that they are treated differently rather gives the lie to the claim that controlling immigration is nothing to do with race.

“That is really what concerns me”, Mehmet told Farage, “that the sort of opportunities I had, that I enjoyed, are not going to be available to so many people arriving so quickly.” Mehmet also agreed with Farage that the 1951 UN Refugee Convention and the European Convention on Human Rights should be rewritten.

But even as Migration Watch moans about people crossing the channel, they are getting what they want legislatively. The new Borders Bill Clause 11 “effectively creates a two tier system where some refugees will have more rights than others, purely based on how they entered the UK”, according to the Refugee Council.

Freedom From Torture said, “If passed into law, cl11 will punish people fleeing torture & war, just because they made their own way to safety. It is wildly out of step with public opinion. In the last week, people across the UK have signed up to welcome more refugees than this govt has in 10 years.”

Hard right Tory MP John Hayes, the member for Britain’s safest Tory seat, was a strong backer of the bill, saying the asylum system needed to be reformed because “a combination of irresponsible activists, fat cat lawyers and the human rights act” were stopping the government deporting failed asylum seekers.

Médecins Sans Frontières said that the bill would make the UK one of the most anti-refugee countries in the world after Tory MPs rejected amendments to the bill which had been proposed by the House of Lords.

It’s all the more ironic that the British government is trying to add yet more cruel legislation to the mountain of laws that already make the UK’s immigration and asylum regime so awful when thousands of people are ready to open their homes to refugees coming from Ukraine.