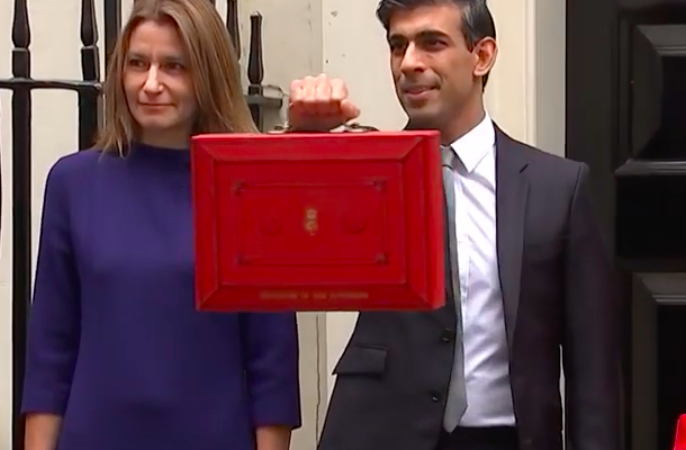 Sixteen years ago, David Cameron led the Conservative opposition’s response to Gordon Brown’s budget and lambasted the then Chancellor as “a roadblock to reform”. Regardless of the accuracy of the accusation then, it is hard not to conclude now that it is the current occupant of the Treasury, Rishi Sunak, who is squatting in the middle of the road, blocking the UK’s path to a cleaner, more affordable, and more secure energy supply.

As war continues to rage in Ukraine, sending already surging gas prices even higher, the Chancellor investing in net zero isn’t just good economic policy, it’s also in the interests of our national security. At tomorrow’s Spring statement, Sunak needs to eschew his reticence to invest, and establish a substantial war chest to support people through the cost of living crisis, decarbonise our energy and secure our energy supply.

The evidence that the current Chancellor is a barrier to policies that are good for the UK economy, consumers and the environment has been mounting for some time. While Boris Johnson sought to position the government as a world leader on the green agenda in the run up to the global climate summit, COP26, Rishi Sunak repeatedly failed to back the agenda with the necessary cash. IPPR analysis has shown a yawning annual public investment gap of around £30 billion a year in terms of what is needed to reach net zero and restore nature.

This reticence to invest was exemplified in the Treasury’s net zero review, which put greater emphasis on the costs of climate action, as opposed to the substantial benefits – economic, health and environmental – or the considerable costs of inaction. By contrast, the Office of Budgetary Responsibility (OBR) has said the costs of reaching net zero are ‘comparatively modest’ but ‘unmitigated climate change would spell disaster’.

The Chancellor’s willingness to stand in the way of meaningful action was in evidence once again as he brought forward his response to soaring gas prices and the hike in the energy price cap. Amid calls for substantial support to help households cope with this unprecedented squeeze on incomes, Sunak brought forward proposals which have been widely judged as inadequate.

His plan to offer repayable loans and an ill-targeted support scheme processed through the council tax system will not prevent a catastrophic hit to many households’ living standards. IPPR analysis shows that even if every household were to get the maximum £350 possible under the chancellor’s scheme, most of the poorest households in the bottom 10 per cent will still be in fuel stress, spending more than a tenth of their income on fuel, with some spending as much as one pound in every five – and that’s before a further cap rise expected later this year.

Many predicted even before the invasion of Ukraine by Russian forces, that the Chancellor would be forced back to offer more support for households in the face of sustained high prices for gas. Now, with some analysts predicting that the energy price cap could rise as a high as £3,000 by October, it is a guaranteed certainty. Moreover, the Ukraine crisis is not only ramping up oil and gas prices but also pressure on the UK (and other nations) to reduce their reliance on Russian gas for the sake of energy security.

So, what should the Chancellor do?

Rather than take further incremental steps, Rishi Sunak should use his spring statement to unleash a comprehensive policy response to address the UK’s energy crisis – wartime requires a wartime budget. It should be aimed at three targets.

First, the government must act now to protect the living standards of families most at risk during the cost of living crisis. IPPR proposes substantially increasing social security payments – including Universal Credit, but also legacy benefits – to get money to households in need. The cost of this support should be recouped, in part, by a windfall tax on North Sea oil and gas.

Second, a big part of the government’s strategy must be to reduce our demand for gas. For the best part of a decade, the government has ignored or undermined the opportunities to improve the quality of our homes, making them warmer and more affordable, and to lower our energy demand. We can no longer afford to ignore these opportunities; they must be seized.

The Chancellor should announce the green equivalent of ‘Help-to-Buy’, what we call ‘GreenGO’ – a massive grants and loans scheme for households to buy heat pumps, solar panels, and energy efficiency measures. It should be made available through every high street bank across the country, with advice centres in local supermarkets and a national advertising campaign.

Third, the government should ramp up investment in clean energy and reduce gas subsidies. The government has already made a commitment to decarbonise the electricity grid by 2035. This will mean accelerating investment in renewable power including onshore wind and solar and adopting policies to support flexibility and storage.

The UK can no longer afford for the chancellor to block progress on this agenda. It’s time for Rishi Sunak to lift the roadblock and grease the wheels of the UK’s drive to net zero – which is also the same path to our energy security and prosperity.