Bolton Wanderers FC said the event “is not something the club or business want to be associated with”. 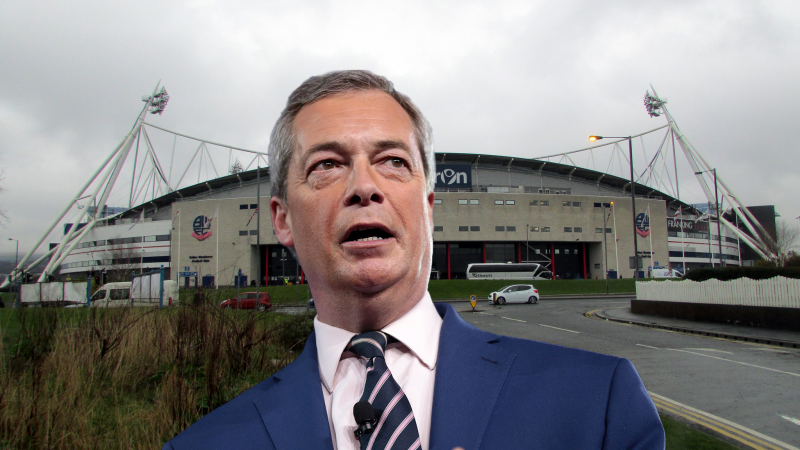 Nigel Farage has confirmed that he will front a pro-fossil fuel campaign for a referendum on the government’s Net Zero targets, but the campaign got off to a rocky start as its first event was cancelled by the venue, Bolton Wanderers football stadium.

Farage has been toying with the idea for a few months, and finally confirmed on March 5 that he would be fronting the campaign which argues that the UK should restart fracking and explore other fossil fuel extraction to replace imported fossil fuels.

Join me alongside Richard Tice and Dominique Samuels in Bolton on Saturday 26th March, as we start our campaign for a referendum on Net Zero.

Discussing the best way to respond to the new campaign, James Murray, the Editor-in-Chief of news site BusinessGreen said in a newsletter that “completely ignoring Farage and his populist campaigns has rarely worked in the past and could only serve to strengthen his central claim that concerns over net zero are being ignored by the government and media.”

Murray says that “the ultimate path to defeating populist campaigns always lies in addressing the legitimate grievances they thrive upon.”

To do this, Murray says “the government and green businesses need to show how they are working hard to curb energy bills, enhance energy security, and improve energy efficiency. They need to show how the short term costs of the net zero transition are fairly shared and the benefits reach everyone.”

There is a general consensus forming that putting green levies on energy bills is regressive, but it’s uncertain whether the government has the will to move green taxes onto wealth or put the burden on the corporations most responsible for CO2 emissions. The cost of living crisis is exposing the UK’s deep levels of poverty and inequality, the fear of which – as with immigration – Farage is attempting to redirect into his campaign for corporate interests.

Like the Brexit referendum, those who stand to gain from rolling back Britain’s climate change pledges count on the public’s lack of knowledge about the energy industries and the long term benefits of a green energy transition.

This was exemplified by Darren Grimes, who could not understand why the general market price of electricity was going up whether or not the supplier in question used 100% renewable electricity or electricity made from burning gas.

As E.ON Energy explain on their website, “Think of the National Grid like a bucket. All the electricity that’s produced in the UK goes in there, and customers like you take it out. We can’t guarantee all the electricity in the bucket is renewable, but we can make sure our portion is.”

Over the past year, around 40% of the UK’s electricity supply has come from fossil fuels, and almost 39% from burning gas, according to data from the Balancing Mechanism Reporting System.

It’s somewhat cynical that the British right wing is exploiting the Ukraine conflict to push fossil fuels, since Britain doesn’t rely on Russian gas. However, Europe as a whole gets 40% of its gas from Russia and a decline in supply will push demand for other sources of gas up.

“The Green Blob has had the view that UK energy is bad in principle and so it’s better to bring it in from elsewhere”, said Jacob Rees-Mogg on his podcast. “Shale gas is very clean gas, as we know”, he added.

Net zero will not be advanced by importing gas, our own supplies are more secure.https://t.co/qTxKrtGfoC

Rees-Mogg was of course talking only about fossil fuels, ignoring the consistent pleading of environmental activists for the British government to invest more in producing renewable energy in the UK.

There are indications that these arguments are shifting the government’s commitment to Net Zero carbon emissions by 2050. The Times reported on March 7 that “Boris Johnson believes the West should be given a “climate change pass” to help wean the EU off Russian gas supplies”. Johnson “wants the West, particularly the US and Canada, to ramp up its own production of gas”.

However, BusinessGreen reported that “Boris Johnson has promised to unveil a fresh energy supply strategy “in the days ahead” that will… boost domestic sources of clean and fossil fuel energy”, though he also admitted that “one of the things that we’re looking at is the possibility of using more of our own hydrocarbons”.

This is a significant step in bringing SMRs into existence. We’re proud to back Rolls’ plan with an initial £210million to develop their design.

“This is the moment when we really need to invest in the renewable energies, in the energy efficiency that so many of us have been banging on about for so long”, former Green Party leader Caroline Lucas told Channel 4.

At a time when the case for renewables is becoming more and more obvious, anti-Net Zero campaigners and their frontman Farage are, ironically, just sucking up oxygen and time we could better spent talking about how to achieve energy security in a renewable way.