The former Brexit minister didn’t take criticism of his comments well, accusing commentators of ‘careless reporting’ and having not read the speech first. 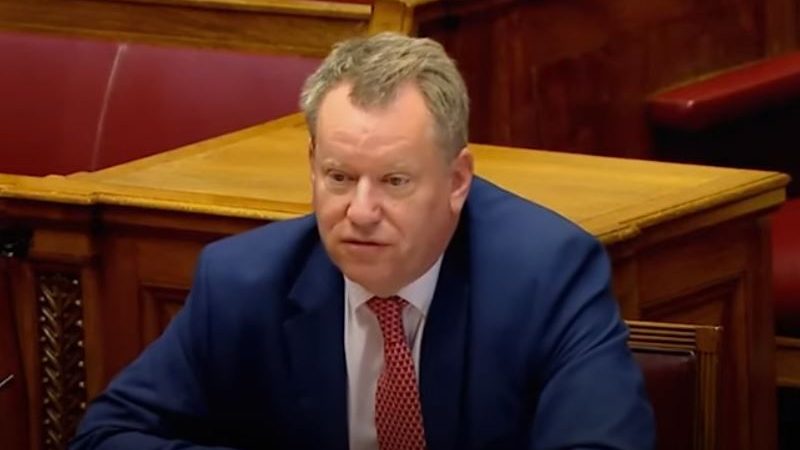 Lord David Frost has caused a stir for saying the Tories should pledge to rip up the Brexit Withdrawal Agreement that governs the unique immigrations and customs issues at the Irish border – unless the bloc gives in to British demands.

The protocol keeps Northern Ireland subject to some EU laws while introducing custom checks on British goods coming into the province as a means of preventing a hard Irish border after Brexit.

As Brexit minister, Frost had threatened to trigger Article 16 to override large parts of the agreement. The threats to suspend the protocol led to Frost being accused of “gross incompetence and hypocrisy,” with Lib Dem leader Ed Davey saying:  “They want to blame everyone else rather than take any responsibility whatsoever. He signed up to a weak deal and to talk about a trade war is just puerile.”

Talks have been dragging on for months over the UK’s demands to renegotiate the part of the Brexit agreement which essentially keeps NI within the single market.

In December 2021, Frost resigned as head of Brexit negotiations over “concerns about the current direction of travel.”

Now the peer has re-entered the NI protocol fray. In a speech in Switzerland this week, he said the post-Brexit agreement was “temporary” and “not realistic”, stating: “If the protocol isn’t redone, then the poison between us will remain.”

Speaking to students during his Churchill Lecture at the University of Zurich, Frost said: “The EU needs to recognise that the protocol was always temporary and contingent and that it depends on a vote in the Northern Ireland Assembly in just over two years.

“It isn’t something that can be insisted upon as a permanent part of the scene. It is experimental and evolutionary in character.”

Now Frost has warned that unless the EU caves in, the UK government would trigger Article 16 of the protocol and “unilaterally suspend parts of the agreement.” If Brussels agreed to the UK’s demands, the government could take Article 16 off the table, Frost continued.

As the Telegraph reports, in 2024, the Northern Ireland Assembly will hold its first “consent vote” on the protocol. This is likely to be the year of the next general election. According to Frost, the government should be prepared to campaign for a no vote in the Assembly and could even call fresh Stormont elections ahead of the vote.

The contentious comments have been slammed, with Frost accused of seeking to undermine Northern Ireland’s electoral process.

Declan Kearney, Sinn Féin’s Brexit spokesperson, said the Tory peer was “unelected” and his remarks served to “further expose the [British government’s] total lack of commitment” to the Stormont institutions.

“No second assembly election in 2024 at the behest of either Tories or political unionism should be countenanced.

“Sinn Féin will oppose any Tory attempt which is designed to undermine the electoral process or continued attempts to hollow out the international law upon which the protocol is premised,” the South Antrim MLA said.

In response to Frost “openly proposing the UK government interferes in NI Assembly elections until they get an anti-protocol majority”, Matthew O’Toole, member of the Legislative Assembly for the Belfast South constituency in the Northern Ireland Assembly, claimed the Tory peer had revealed a “contempt for the people of Northern Ireland”.

Referring to the actions of the former Brexit negotiator as “chilling,” O’Toole tweeted:

“He is a dangerous fanatic who cares nothing for this place.”

In response to the censure of the speech, Lord Frost hit back, making accusations of “careless reporting” of his Zurich speech.

Claiming that the Spectator “gets it right”, Frost links to an article in the pro-Brexit Spectator, which argues that the speech is a “sign of a reminder that there is currently an opportunity to put UK-EU relations on a better footing,” and says Frost set out a potential basis for future relations between the UK and EU in a “warm” tone.

Steve Peers, professor of EU law, human rights law and world trade law at the university of Essex, noted how Lord Frost, “very, very falsely states that the Northern Ireland protocol was ‘imposed on us’. In fact, the UK government presented it as a negotiating victory, campaigned on it as an ‘oven ready deal’, and Parliament voted on it.”

Noting how he had read the speech, Peers said it was “profoundly dishonest.”

As discussion around Frost’s demands continue, reports have emerged that Liz Truss is ready to trigger Article 16, in an attempt to force a quick deal with the EU over the NI protocol.

On March 17, The Times reported that the foreign secretary has “lost faith” in negotiations with the EU and wants Johnson to warn the European Commission that the UK is ready to suspend parts of the agreement if a deal is not struck before the Northern Ireland elections in May.