The envionment and energy crisis are coming together to create a headache for the Government which is also dividing the Tory party. 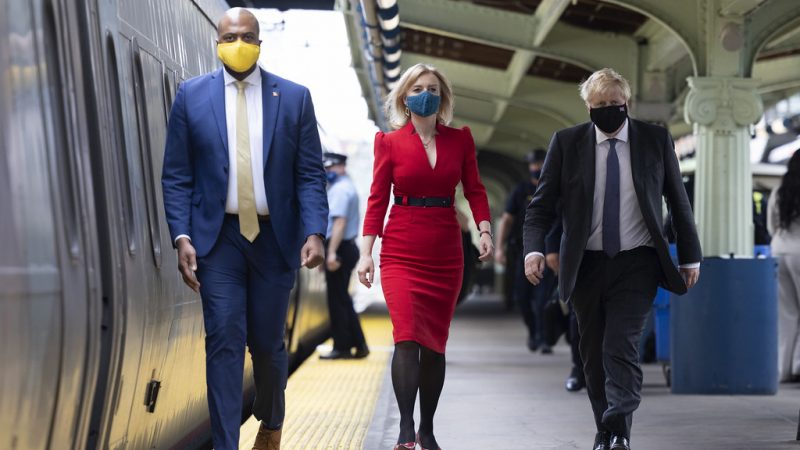 Pro-fossil fuels think tank Net Zero Watch has congratulated Liz Truss for ‘battling’ for shale gas, with business secretary Kwasi Kwarteng urging the government not to back down on its Net Zero ambitions.

Truss is often seen as a free market fundamentalist who frequently takes positions which are popular with the Conservative Party membership. Truss came first in a poll of Conservative Home members who were asked who should be the next Tory leader in December.

Truss has quite a long history of supporting fracking, saying in 2018 that people who didn’t want the destructive form of fossil fuel production in their communities were NIMBYs.

In 2016, a leaked letter from 2015, signed by Liz Truss, then the environment secretary, said it should be a “top priority” to ensure that environmental protections should not obstruct fracking companies in the UK.

Anti-fracking website Drill or Drop reported that the leaked letter indicated that the government wanted to take away planning decisions on fracking sites from local councils.

Kwarteng released a statement on March 10 saying that “we need to focus on generating cheaper, cleaner power here in the UK – recognising that gas is expensive, and renewables are relatively cheap”.

However, he also said that “we need to recognise that this transition will not happen overnight. In the meantime we need more investment in North Sea oil and gas production”.

Kwarteng also answered a question in the Commons on March 9 about fracking from one of his colleagues. Kwarteng was energy minister at the time the government set its policy on fracking, and said that:

“The government has always been clear that we will take a precautionary approach that supports shale gas exploration if it can be done in a safe and sustainable way. That remains our position. And we will be evidence-led.”

The Guardian said that Kwarteng was “toning down” his anti-fracking rhetoric after hints at a U-turn from Downing Street.

A lot of younger Conservatives, especially those associated with the Conservative Environment Network (CEN) are more against the idea of fracking. The CEN said “Fracking isn’t the answer to the energy crunch.”

A poll by CEN in September 2021 found that Tory voters in Red Wall seats supported further action to tackle climate change, with 53% of respondents saying the government should take stronger action.

Calls to restart fracking within the Tories are being led by Craig McKinlay and Steve Baker, who set up the ‘Net Zero Scrutiny Group’ in Parliament last year. They were among 34 MPs who wrote to the Government demanding a halt to the ban on fracking.

But a response from Kwarteng’s Business department said the MPs should ‘get real’. A spokesperson told the Daily Mail that: ‘The UK is in no way dependent on Russian gas, with imports making up just 4 per cent of demand. Fracking would have no effect on domestic energy prices in the near future.’

In February it was reported that Craig McKinlay had recruited staff from the controversial Tufton Street think tank, Global Warming Policy Foundation, to work for the Net Zero Scrutiny Group.

Lancashire Live reported that the government’s rethink on fracking could mean that “two Cuadrilla sites in Lancashire may be handed over to the Royal Geographical Society rather than being concreted over.”

Former Brexit Minister Lord Frost welcomed the news, while Energy Minister Lord Callanan said there could be “severe environmental problems” with fracking, and that “Lancashire is not Texas”.

The economic case against fracking

According to the Energy and Climate Intelligence Unit, “The UK contains shale formations bearing oil in the south and gas in the north. The Bowland Shale in the north of England is thought to contain  about 1300 trillion cubic feet (Tcf) of gas. By comparison, the UK consumes about 3 Tcf per year.”

“However, only a small proportion of gas in the Bowland can be extracted – perhaps only about 4%. Compared with North America, the shale geology of the UK is considerably more complex, faults are numerous, and drilling costs are  substantially higher [pdf link].”

A National Audit Office report in 2019 said that “the Department [for Business] does not know how much shale gas can be technically and commercially extracted. It does not expect shale gas production to lead to lower energy prices.”

The NAO also noted that “in 2016, Cabinet Office expected up to 20 fracked wells by mid-2020, but three wells have been fracked to date. Government attributes this slow progress in part to low public acceptance.“