The government suffered a number of defeats in the House of Lords over its anti-refugee Nationality and Borders Bill. 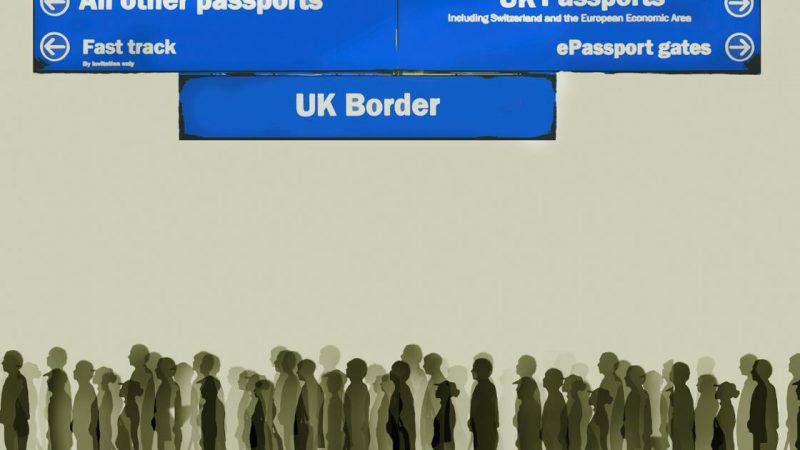 Home Secretary Priti Patel has come under pressure to relax visa rules for Ukrainian citizens, but has only offered minimal rule changes to make it easier for Ukrainians with a family member in the UK to enter the country.

As the conflict broke out, Ireland waived visa rules allowing Ukrainians to immediately enter Ireland, while the EU has given Ukrainians the right to reside in the Schengen area for 3 years.

However, the UK has only offered to extend the visas of Ukrainians already in the UK, and reduce language and salary requirements for Ukrainians applying for UK visas. It can take weeks for the UK to process visa applications, but Patel has said the UK will not waive visa requirements because of concerns about extremists in Ukraine who could enter the UK.

Sir Edward Leigh, the Conservative MP for Gainsborough in Lincolnshire, praised the Home Secretary for not “throwing away the immigration rule book”.

The crisis in Ukraine has exposed Britain’s exclusionary visa rules for non-EU citizens at a time when the government’s Nationality and Borders Bill is going through parliament. On Monday night the bill was dealt a series of defeats in the House of Lords over some of its more repressive measures, such as criminalising refugees who arrive by boat.

The government was also defeated on an amendment added to the bill by opposition peers which seeks to give citizenship to the descendants of Chagos Islanders, who were forcibly expelled from their homeland in the British Indian Ocean Territory (BIOT) in the 1970s, so the US could build the Diego Garcia military base.

Baroness Lister, who moved this amendment, told LFF, “It’s been dubbed the anti Refugee bill and that’s what I called it at second reading and that’s what I think it is. I think it’s very harmful for refugees, it’s very harmful for the international edifice of rights for refugees. We’re just being selfish, we’re pulling up the drawbridge and I hope we continue to defeat the government on it.”

Following defeats in the Lords on the Bill, the government has faced calls to scrap the legislation, partly because it “could affect the rights of Ukrainians fleeing the war and travelling to the UK via Poland or Romania, which the government classifies as safe countries”, according to the FT.

Baroness Lister said there were a number of bad things about the Bill: “Particularly I would single out Clause 31 and 32 which are reinterpreting the Refugee Convention in a way that would make it particularly difficult for women fleeing gender based violence. It’s also potentially very damaging to people who may be fleeing on grounds of persecution because of their sexuality, so there’s a lot of little things. The government insists it’s all consistent with the Refugee Convention and the UNHCR insists that it isn’t, and I know who I believe.”

The Independent also reported that a number of prominent Tories including David Davis and Dominic Grieve had written “a strongly-worded letter to Boris Johnson”, which states that the Nationality and Borders Bill will be “dangerous” and will “reinterpret” the 1951 Refugee Convention and “significantly breach key international obligations”.

The Liberal Democrats and Scottish National Party have urged the government to totally scrap the legislation, saying it “criminalised” seeking asylum. The Labour Party, meanwhile, have refused to support an open door policy for Ukrainian refugees as they increasingly look to take a tougher stance on immigration issues.

The Ukraine crisis seems to have hardened sentiment against the bill, with some peers pointing out that the law would deny Ukrainians some rights as refugees.

Crossbencher Lord Kerr said in Parliament that “if I were coming from Ukraine, I could not be a group 1 refugee because I cannot come directly. The clause says that the requirement of being a group 1 refugee is that you have come to the United Kingdom directly from the country or territory where your life or freedom were threatened. So nobody from Ukraine can be entitled to full refugee convention rights in this country, if this becomes the law.”

Labour’s Baroness Chakrabarti stated in a question in the House of Lords that “due to tragic events in recent days, our defence of the refugee convention is now totally inseparable from our defence of the Ukrainian people.” Baroness Williams, the Minister responding, said that “I can absolutely assure the noble Baroness that everything that we do will be aligned with the refugee convention.”

Paul Blomfield MP raised the case of a Ukrainian national who was trying to get his sister safe passage to the UK but was being prevented by visa rules. The Home Secretary said she “wouldn’t rule anything out” in terms of changing the visa rules to accommodate Ukrainians.

Former Archbishop of Canterbury Rowan Williams also criticised the Bill, saying the government should be “ashamed” of the “morally questionable” new rules.

Issues around immigration and nationality expose the borders of who gets to be part of our club and who doesn’t. While non-EU citizens married to British people will continue to have to pay thousands of pounds for settlement visas so they can live with their partners in the UK, the rules for Ukrainians may be temporarily liberalised in response to a political situation in which the UK is supporting the Ukrainian government.

It should not take a war for the discriminatory and exclusionary effects of the UK’s visa regime to come under scrutiny. Changing the rules to make it slightly easier for some Ukrainians to come to the UK doesn’t change how difficult it remains for most foreign nationals working in the UK or married to UK citizens to regularise their residency.

New immigration bills are proposed all the time, and the government’s tightening of policy seems to be done as a knee jerk response to specific pressures, without any long term goals or planning. Ukrainians hoping to join family members in the UK may be about to find out how expensive and Byzantine the UK immigration system can be.