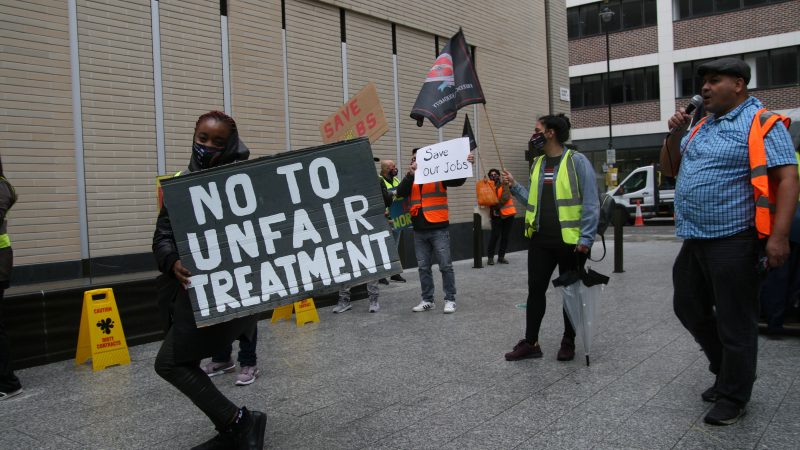 Fanny has worked at Facebook for nine years. Or rather, she’s worked for outsourced contractors at the firm for that long. In that time, she has seen the firm grow, executives prosper, and the swanky offices at Brook Street blossom into an orchard of tech culture. Complete with that intriguing mix of free breakfasts and achingly long hours.

“We have more work and fewer people, if anything,” she tells Left Foot Forward. The pandemic has seen a raft of companies leave their building, including Manchester United. Now the whole building is Facebook – and while the tech firm’s direct workforce has grown, no such largesse has been offered to the migrant cleaners.

The money they get is just above minimum wage, in one of the most expensive cities in the world. And after expanding cleaners’ workloads – without a similar increase in the number of staff – managers have started complaining, the union alleges. Not at the lack of workers, but the supposed quality of the work.

Like many migrant workers, Fanny works part time, as a mum of three. “Sometimes I do the evening shift. We have to cover a whole floor, which involves cleaning all the meeting rooms. We might have more than 50 meeting rooms to clean, including sanitising mini-iPads, hoovering, wiping down tables.”

It was a difficult job at the height of the pandemic, when cleaning regimens were toughened up. Now though, it’s even harder: the cleaning regimen remains strict, while staff are returning to offices in growing numbers. “Most of the meeting rooms are now busy,” Fanny tells us.

The union blames the current outsourcer, Churchill, which only provides enough staff time to cover one person per floor. Bear in mind this is not over the course of the day – this is in the space of four hours. Less than £50, then, per floor. “It is double the workload we used to do..It’s too much pressure,” Fanny says.

For its part, Facebook can, like all outsourcing arrangements, insist it’s a matter for the cleaning firm. Though the fact that cleaners get access to Facebook’s free food suggests the dlineration isn’t quite so clear-cut.

It is mentally draining: “Sometimes you try your best and people still complain. You know they need more people. You work under pressure. You had time to go deep before. But now it’s not enough.”

Last year their union rep was sacked, in circumstances the union says amount to unfair dismissal. Whatever the case, Fanny says: “We couldn’t do the job properly [due to understaffing], and he got the blame.”

But the cleaners remain passionate about fighting for their rights. In 2020, they saw the fruits of that hard work: “The company gave us a threat of redundancies. We stopped them,” CAIWU General Secretary Alberto Durango tells LFF.

Last month, Churchill met with the union to negotiate – itself a minor victory. In the face of imminent industrial action, the firm agreed to boost pay to the revised London Living Wage rate of £11.05 an hour. The pay award will be backdated to November 2022. The cleaners’ individual duties, roles and areas of responsibility have been specified, one step towards solving the ongoing issue of excessive workloads. (The issue of Guillermo Camacho’s victimisation and eventual dismissal remains unresolved, and is subject to a forthcoming employment tribunal case.)

The win is shared by the RMT union too, which has teamed up with CAIWU to tackle low pay and intense workloads at Facebook.

For now though, the Facebook dispute represents another case study in the dark underbelly of billionaire tech firms. But it also shows that, for all that outsourcing companies may try and pass the buck, that line can only hold for so long in the face of fierce organising.

CAIWU has recently won the London Living Wage at a string of unlikely workplaces – from Oxford Circus’ Nike Town to the Royal Opera House. Outsourcing giants, your union-free zone may be next.