By failing to accept visa applications from Ukrainians, the government offers no safe and legal direct entry to Britain for those fleeing danger in the war-torn country, unless they have British relatives. 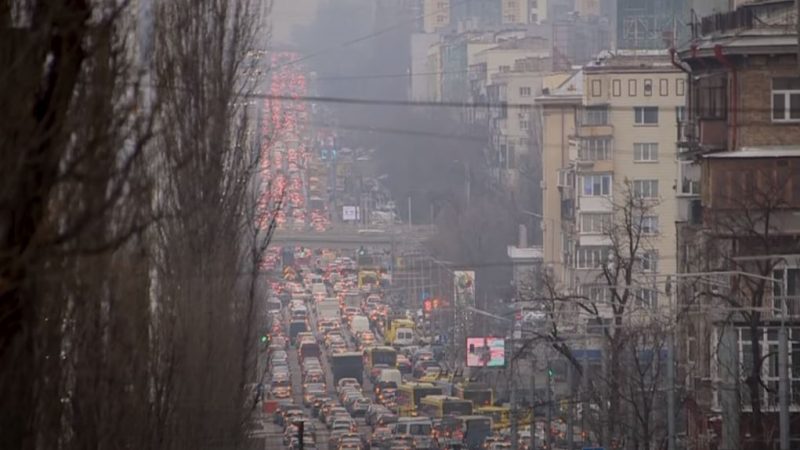 As devastating footage shows lines of cars evacuating Ukraine’s cities and people dragging possessions as they flee their homes following Russian invasion, the UK government is under fire for failing to set up a safe and legal route for people seeking asylum in Britain.

On February 25, UK government buildings in London flew the Ukrainian flag as a symbol of solidarity. The nation’s pale blue and yellow colours waved above the likes of 10 Downing Street and the Home Office HQ in Whitehall.

The Home Office proudly shared the photo of the flying flag on social media, saying: “Today we’re flying Ukraine’s flag in support of the Ukrainian people, including those here in the UK.”

The post was criticised, with many voicing their dismay at the irony of the flag-flying ‘solidarity’ while the department refuses to offer a safe and secure route for Ukrainian refugees.

“Yesterday the Ukrainian flag flew over the Home Office. At the same time Priti Patel announced that all visa applications for Ukrainians without UK families were suspended and that asylum applications for those travelling through third “safe” counties would not be considered.

“No safe and legal route for Ukrainians fleeing war to travel to UK for asylum exists.

“Our government should not be judged on it’s flag waving, it should be judged on both its actions against those fleeing conflict and its inaction in securing safe routes for refugees.”

As the Ukraine flag flew above the Home Office HQ, a statement on the department’s website read: “Ukrainian nationals in Ukraine (who aren’t immediate family members of British nationals normally living in Ukraine, or where the British national is living in the UK), are currently unable to make visa applications to visit, work, study or join family in the UK.”

According to the Home Office, the UK visa application centre in Ukrainian capital of Kiev was closed and all services there have been suspended.

As the Independent reports, dependents in Ukraine of British nationals are able to apply for visas in the city of Lviv. However, those without close British relatives are only able to obtain visas if they reach centres in Romania, Poland, Moldova and Hungary.

By failing to accept visa applications from Ukrainians, the government offers no safe and legal direct entry to Britain for those fleeing danger in the war-torn country, unless they have British relatives.

Approximately 5 million people to be displaced

On Thursday February 24, the United Nations warned that the situation was quickly deteriorating, estimating that several thousand Ukrainians had already fled, with more expected to follow.

The US estimates that around 5 million people will be displaced by the conflict. Poland alone is preparing to take in up to 1 million refugees.

The International Rescue Committee, the global humanitarian aid, relief and development organisation, is urging countries to publicly commit their support of refugees from Ukraine.

Talking to the Independent, Harlem Desir, a senior representative of the International Rescue Committee, and former French minister, said: “This should not be looked at as another migration crisis. This is a crisis of war. It should not be business as usual, we need real support for the Ukrainian people.”

In the wake of the crisis, criticism of the government’s contentious Nationality and Borders Bill has resurfaced.

Under the Nationality and Borders Bill – currently being debated in parliament – a reform to immigration law means that applicants for asylum from people who have temporarily resided in safe third countries, can be branded “inadmissible.”

Subsequently, people from Ukraine who have been forced to travel to countries like Poland, may be later refused asylum in the UK.

Charities warn that the crisis “illuminates the crucial flaw” in the Bill, which reprimands people arriving at UK shores by illegal means, such as boats across the English Channel.

Organisations are urging the UK government to urgently welcome refugees from the conflict in Ukraine.

A letter to the Times penned by several charities including Save the Children, the Refugee Council and Amnesty International, calls on the Home Office to lead international cooperation to “handle a sudden increase in the number of people forced to flee” the conflict, which threatens to be the most significant in Europe since the collapse of Yugoslavia.

The letter continues that a “well-resourced initiative working with councils across the country” to support Ukrainians in search of sanctuary is required.

“We urge the government to rethink this harmful bill and uphold our proud record of helping those fleeing war and oppression,” the charities continued.

This week, Michael Martin, Irish Fianna Fail politician who has served as Taoiseach since 2020, announced Ireland would waiver visa requirements for all Ukrainian people arriving in Ireland.

Meanwhile, the UK Home Office issued an update on the UK’s visa application centres in the Ukraine region, which read:

“The UK government has an extensive visa application centre network in neighbouring countries. Ukrainians in these countries can access these services and apply for visas under existing immigration routes.”

“Government must urgently provide a simple sanctuary route to UK for Ukrainians who need our help.”

A spokesperson for the UK government said: “Ukrainian nationals are able to apply for visas from these centres and we have announced concessions for Ukrainians currently in the UK, to extend or switch their visa.

“We are working with other European countries to ensure that responses to any migration issues are practical and in the best interests of the Ukrainian people.”