Fossil fuel backers are putting pressure on the government to restart fracking, despite public opposition. 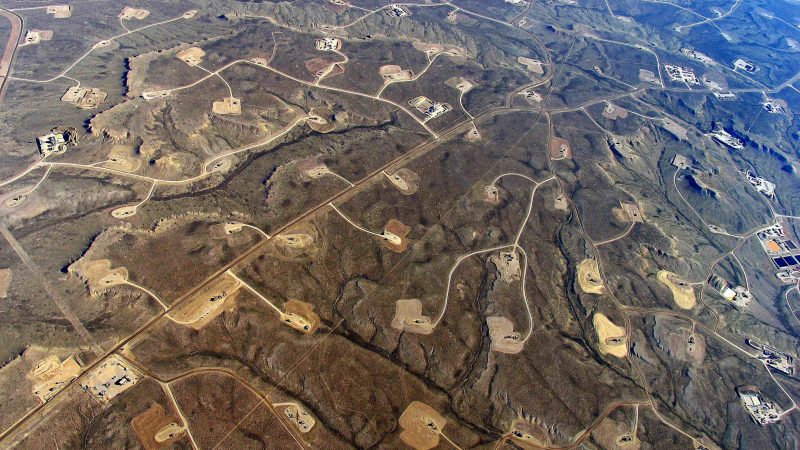 Russia’s threats and now invasion of Ukraine is being used by right wing journalists and think tanks to call for the UK to renew fracking and explore for more oil in the North Sea.

Calls for greater fossil fuel production have been growing for some months, with groups like the Tufton Street based Net Zero Watch leading the calls to roll back the unambitious green plans of the Johnson government. Like minded pundits like Darren Grimes and Douglas Murray have also been advocating for the UK to restart fracking.

A group of 30 Tory MPs and the fracking company Cuadrilla also signed a letter calling for the resumption of fracking in Lancashire, something that the activist Barbara Richardson said would create renewed opposition by affected communities near fracking sites.

But fracking comes with serious environmental problems, and a large increase in fracking in the UK would mean more UK shale gas supplied to the global gas grid, meaning any reduction in energy costs would be spread around, not just enjoyed by the UK.

Chaitanya Kumar, the Head of Environment and Green Transition at the New Economics Foundation says that “unless the government somehow stipulates that a portion of shale is only for the UK (which it hasn’t proposed), we are unlikely to benefit from a shale boom in terms of energy bills. Even if the government did such a thing, fracking would still not bring bills down as bill payers would have to pay for a highly uneconomic sector.”

Instead of fracking, the UK could increase investment in green energy infrastructure. Research by the TUC has shown that the UK spends only 0.6% of its annual GDP on the green transition. This figure is based on the UK’s 10 Point Plan for a Green Industrial Revolution, which allocated only around £12 billion in extra spending on green infrastructure as part of the pandemic recovery.

The TUC says that “The UK’s green recovery plans remain only a tiny fraction of that in other G7 countries. Scaled by population, the UK green investment plans are only 26% of France’s, 21% of Canada, 13% of Italy’s and 6% of the USA’s.”

Not only is there lots of capacity to improve the UK’s ambition to achieve greater energy security, but the public has an appetite for it, with polls suggesting people in Scotland would be happy with more onshore wind.

There is no reason why we need to continue to rely on imported gas, or restart fracking, to meet energy demands. Becoming energy independent is an obvious way to remove the UK’s dependence on gas imports, particularly from Russia, and to insulate against energy price rises caused by global demand.

The Levelised Cost of Energy for solar and wind power has also come right down in price, making it much cheaper to produce renewable energy than it was a decade ago.

Net Zero Watch also uses unreliable and optimistic estimates of the amount of recoverable shale gas under the UK. One recent newsletter from the group states that “just 10 per cent of the shale gas recovered from the Bowland basin in the north of England could supply 50 years of current UK gas demand and would significantly undercut the demand for imported gas.”

This claim was also recently repeated by Cuadrilla boss Francis Egan in a letter to the Telegraph.

However, a recent LSE publication suggests that this projection is based on outdated statistics, as “according to the British Geological Survey, initial estimates in 2013﻿ suggested that the Bowland-Hodder area may have held between 23.3 and 64.6 trillion cubic metres (tcm), but a more recent analysis in 2019﻿ suggested the figure is closer to 4.0 tcm. A 2014 study﻿ estimated that the Midland Valley hosts 1.4–3.8 tcm. Given the uncertainties, it is difficult to produce a reliable estimate of the shale gas resources that are technically and economically viable to extract in the UK”.

Britain’s waterways are already polluted by sewage, and restarting fracking would mean the drilling of hundreds of boreholes, which could lead to contaminated water, as it has done in the US. Then there’s also the problem of earthquakes caused by fracking. It was regulations about limiting earthquakes which caused Cuadrilla’s operations to stop in 2019, and unless these regulations are relaxed, it’s hard to see how any fracking site could operate legally.

From 2020-22, the UK earmarked £37 billion for the Covid Test and Trace system, which is now coming to an end as the government has ended free Covid tests. The TUC has suggested that allocating “£85 billion for emergency green infrastructure would move the UK up into 3rd position in the G7 league table (for green infrastructure spending) and… create 1.24 million quality green jobs in the immediate term”. If we can allocate the necessary funds to fight Covid, why can’t we do it to fight climate change?

Frank Gordon, Director of Policy at the Association for Renewable Energy and Clean Technology (REA), told LFF that “Effective routes to markets for all technologies are essential. For example, the Government could provide a real catalyst by holding well-funded, regular CfD (Contracts for Difference) auctions, with a mix of technologies such as deep geothermal and marine included, set out over a three year rolling timetable. We also need national, transparent, flexibility markets for energy storage and related technologies, in order to enable the transition.”

“The UK Government’s Crown Commercial Service (CCS) – the largest single purchaser of power in the country – should also be directed to procure 100% of power from renewables. Finally, renewable investment will be deterred as long as fossil fuel subsidies remain in place, with the public picking up the costs for offshore oil site decommissioning, for example. The Government should instead commit to ending these subsidies, as well as steadily increasing the carbon price, to drive investment for renewables.”

A survey by the Department for Business in 2021 found just 17% of people in the UK support fracking. There is clearly a concerted effort in right wing media and pressure groups like Net Zero Watch to reopen the fracking debate. Yet, if the goal is energy security, there are many other, greener ways to achieve this.

Progressive parties could also be using security-based arguments for promoting green energy. The Labour Party, so concerned with being patriotic these days, could even make an argument that it’s a patriotic duty to develop the UK’s green energy resources, which would reduce our dependence on imported gas and create over a million jobs.

The right should not be allowed to seize on this crisis to push discredited, polluting forms of energy extraction.