Today – February 26 – marks an NHS day of action, with unions, health organisations and campaigners uniting to highlight the impact the contentious Health and Care Bill will have on the health service. 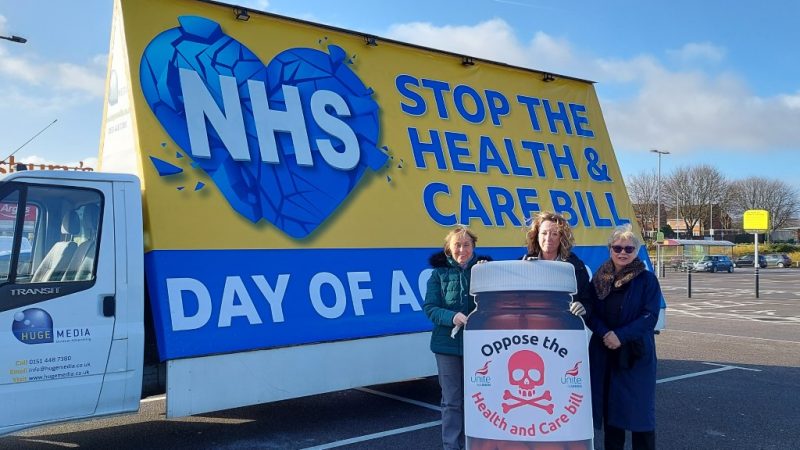 Warnings that the government is using the Health and Care Bill to push through a major restructuring of the NHS are gathering momentum. If passed, the changes are likely to lead to more privatisation, additional cuts, limited access to treatments and more cronyism.

The contentious Bill, which was first introduced in the House of Commons on July 6, 2021, with reforms set to come into effect in April 2022, also caps adult social care costs at £86,000, a move that has been condemned for protecting the rich while hitting the poor.

Critics warn that it will make years of underfunding, understaffing and privatisation much worse. People will be made to pay for their health care and more private companies will take over health services and be able to make decisions on budgets.

On November 22, 2021, MPs voted on the amendment to the Health and Care Bill, with the Commons voting in favour of the proposed cap by 272 votes to 246. It is back before Parliament on March 1.

To help spread the message of the damaging impact the Bill will have on the NHS and everyone who uses it, Unite the Union has joined forced with the Your NHS Need You movement to stop the Bill and renationalise the health service, SOS NHS, and other organisations dedicated to saving the health service.

Constituencies across the UK with MPs who support the Health and Care Bill are taking to the streets with stalls, billboards and protests, to underline the affect the restructuring of the NHS will have.

The Day of NHS Action is part of a month-long movement that started on February 14, with billboards, ad vans, and bus stops, carrying the message to voters in constituencies where Tory MPs voted for the Bill in 2021.

One such constituency is Crewe and Nantwich, where a large billboard has been displayed in the street of Conservative MP Kieran Mullan.  Mullan was elected MP for Crewe and Nantwich in the 2019 general election and voted for the Bill to be passed.

The billboard reads: “Last year, your MP Kieran Mullan voted for NHS privatisation. This year, tell him to vote against the toxic Health and Care Bill.”

Commenting on the fight to stop the Bill and save the NHS from the hands of privatisation, Unite general secretary Sharon Graham said:

“While our members and their families in England are being told to expect NHS waiting lists to rise for years to come, the government’s priority is to pave the way for further disastrous privatisation. Every time private companies run NHS services they put profits before patients who pay the price.

“So MPs must put their constituents before their private sector mates and vote to junk the Bill. Of course, it is unlikely they will, and Unite will have to continue to fight these big corporate money moves step by step inside the NHS.”

“Our NHS is under threat and time is running out. The Health and Care Bill will cut medical and emergency services, force more people to pay for their health care and let more private companies take over services and make decisions on budgets.

“That is why Community members will be out on the streets on Saturday, highlighting the tsunami of attacks our health service is facing and asking local people to tell their MPs they must vote against the Health and Care Bill to save our NHS.”

A large demonstration is taking place in Liverpool, where unions, health organisations and campaigners are marching in protest of the Bill.

Among the campaigners is Save Liverpool’s Women’s Hospital, the largest maternity hospital in Europe.

The group is urging people to write to their MPs and councillors to prevent the Bill going ahead and “stop the charges for treatments being slid in through the back door.”

Talking to LFF, Felicity Dowling of Save Liverpool’s Women’s Hospital, spoke of the dangers of the Bill and the privatisation of the NHS.

“It risks bringing in an American-style healthcare system which rations care into the British system, and it has got to stop.

“The main aim of the today’s action is to raise awareness of the Bill and its associated dangers.”

A list of the constituencies involved in Unite’s NHS Day of Action to highlight the “tsunami of attacks our health service is facing,” is published on the Unite website.