As Johnson announces a Brexit Freedoms Bill, tension over the UK's departure from the EU heightened this week among leading ministers. 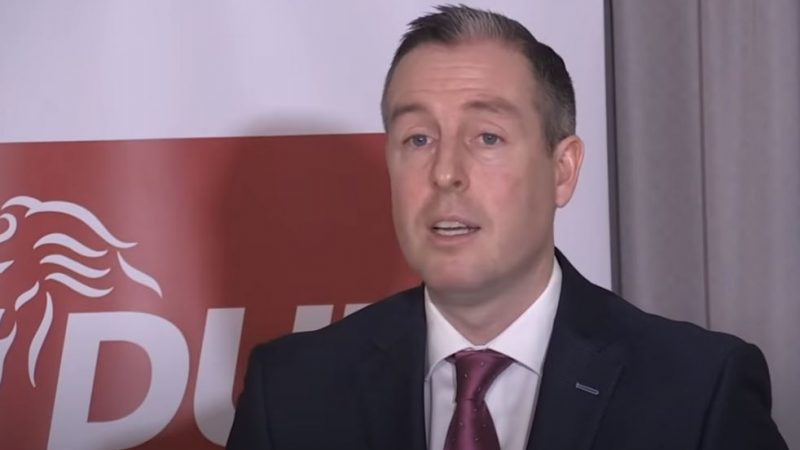 Paul Givan resigned in protest of the Northern Ireland Protocol – the post-Brexit trade rules that assured there would be no new checks on goods crossing the border between NI and the Republic of Ireland (ROI), to ensure free movement of trade across the Irish land border.

The Democratic Unionist Party’s (DUP) has been critical of the arrangements, saying they are damaging Northern Ireland’s place in the UK.

Givan said the power-sharing institutions were being tested once again.

“The delicate balance created by the Belfast and St Andrew’s Agreements has been impacted by the agreement made by the United Kingdom and the European Union which created the Northern Ireland Protocol,” he said.

The resignation is likely to complicate talks between the EU and Britain to rework the politically divisive Northern Ireland protocol that governs EU/Northern Ireland trade and was agreed by Westminster as part of the Britain’s departure from the EU two years ago.

As NI’s first minister quits over the protocol fallout, Portugal voiced disdain over post-Brexit trade agreements and their impact on the nation.

Marking the first time Lisbon has officially conveyed antipathy over Brexit, a leading Portuguese minister spoke of the damaged political and economic impact Britain’s departure of the EU has had on Portugal.

Speaking to The Times this week, Pedro Siza Viera, the economy minister in Portugal, said that Brexit had damaged the relationship between the two nations.

The remarks come as Portugal and Britain prepare to celebrate the 650th anniversary of the Anglo-Portuguese Treaty of 1373, known as the Treaty of Peace, Friendship and Alliance.

Siza Viera spoke of how Brexit has negatively impacted Portugal.

“Some exports have been very adversely affected. Brexit has had an adverse impact, of course… For Portugal, Brexit was not good news.

“The UK is one of our main trading partners, one of the main investment partners,” he added.

Siza Viera continued to say how, politically, Portugal has never been part of a significant organisation which the UK was not a member of.

“So just imagine this: Britain was a founding member of EFTA (the European Free Trade Association). We benefited from that. When the UK joined the EU, we had to join the EU.”

Concluding the interview with The Times, the economy minister said that one of the most constant principles of Portuguese foreign policy is the dialectic relationship with the UK.”

The impact Brexit’s exit from the EU has had on Portugal’s trade with the UK has been documented. In February 2021, after the UK left the EU’s single market at the end of 2020, raising barriers on trade, data showed imports from Portugal to Britain had more than halved and exports had dropped by 15%. This contrasted sharply with intra-EU trade data.

The value of goods brought in from the UK fell 56% compared to a decline of just 10.3% in imports from the 27 EU countries.

INE (the Spanish Statistical Office) data showed that exports to the UK fell over 15% while Portugal’s sales to the EU rose 1.3%.

The same week saw the UK government launch a ‘Brexit Freedoms’ Bill. Downing Street says the Bill is part of a cross-government drive to make it easier to amend outdated EU laws, which, it claims, will ‘cut £1bn of red tape’ for UK business.

During a visit to Tilbury Docks, Johnson told broadcasters that while the UK will not diverge from the EU rulebook “for the sake of it”, the legislation will help secure investment in cutting-edge technologies.

“There are things we can do differently and we think in a way that will encourage business to invest even more,” said the PM.

The announcement of the Bill caused immediate criticism, with many turning to Twitter to express their disproval.

#BrexitFreedomBill – you know it’ll remove employment and consumer rights, safety standards, pollute our beaches, rivers and drinking water and make it harder to export EU countries by no longer complying with international standards,” someone tweeted.

“The #BrexitFreedomBill is going to be as successful as last year’s Covid Freedom Day, isn’t it?

“You can’t escape from a disaster by simply declaring it a triumph,” another wrote.

“UK Tories obviously don’t do irony. As a Scottish citizen I lost many of my freedoms on the day #Brexit was imposed on my country,” someone posted.

Another wrote, “Brexit is costing businesses about £80 billion a year.

“This ‘let’s appease the Brexit base who will swallow anything’ with this unthought out, unnecessary bill, will save about £1 billion.

“It’s to save Johnson, it’s to appeal to the fanatics who are in denial #BrexitFreedomBill.”

Sarah Olney, Liberal Democrat spokesperson for business, said: “If this is the best Boris Johnson can muster up to save his job, then he is in big trouble. Try telling the thousands of lorry drivers stuck in queues at Dover that red tape is being cut.”

Sentiment echoed by a Labour source, who said: “The key question for the government is which of the proposed changes in regulation depend on the passage of this bill, and if the answer is none, what other changes are they planning that do? Until they can explain all that, we have to ask what the point of this bill is.”