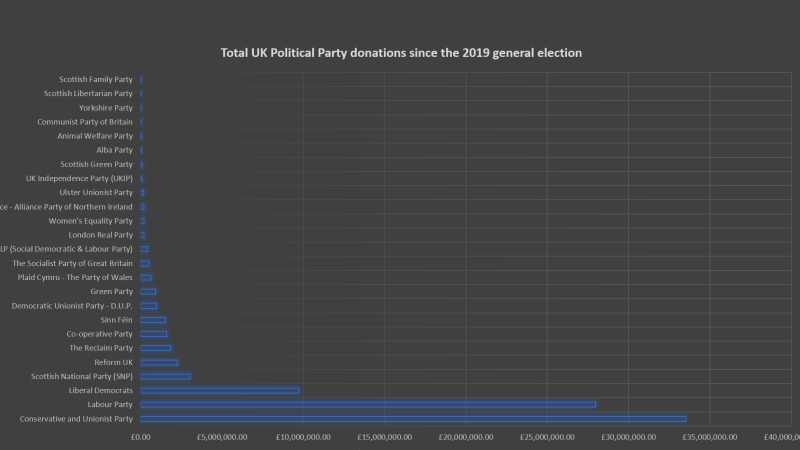 Since 12 December 2019, UK political parties have received around £86 million in donations from individuals, companies, trade unions and other groups.

39% of the total donations to parties have gone to the Conservatives. The Labour Party received around a third of total donations, but their funding is largely made up of trade union and public funding.

However, if we only look at donations from individuals, the Tories received 63% of all these donations. Company donations are even more monopolised by the Conservative Party, with 78% of the total going to the Tories.

Total donations since the last election have been considerably less than in the period between the 2017 and 2019 general elections, when £201 million was donated to parties in total.

Although 39 of the top 50 biggest donors’ money went to the Conservative Party, the biggest single donor was Jeremy Hosking who gave almost £1.85 million to Laurence Fox’s Reclaim Party and £500,000 to Reform UK. Hosking owns a financial asset management company and is a shareholder in Crystal Palace FC.

You can see the full list of donors we compiled from Electoral Commission data online here.

The top donor to the Tories since the last election is Malcolm Healey, owner of Wren Kitchens, whose turnover increased by 15% in 2020 to £703 million according to their Companies House accounts. The Hull Daily Mail reports that despite this, the firm laid off hundreds of staff in 2020 while claiming £15.5 million from the furlough job retention scheme.

The Hull Daily Mail also noted that “Malcolm and his brother, Eddie, who died in August, were listed as being worth £2.2bn in the latest Sunday Times Rich List – a £200m increase in wealth from the previous year.” There is no suggestion that Wren Kitchens or the Healeys have broken any rules regarding furlough money claims.

The third highest donation since the last election was to Sinn Fein, from the estate of “mysterious” donor William Hampton, who died in Wales in 2018 according to the Belfast Telegraph.

The appointment as a Peer of Peter Cruddas, a businessman who has given more than £3 million to the Tories since 2010, has been widely publicised. He gave £500,000 just 3 days after his appointment to the House of Lords in 2020.

An investigation by the Sunday Times and OpenDemocracy revealed that £3 million is often the sort of money given by Tory donors who later find themselves with a Peerage, with “a former Conservative Party chairman telling The Sunday Times: “Once you pay your £3m, you get your peerage.””

Cruddas himself had to resign as co-treasurer of the Conservative Party in 2012 after he was caught in a sting offering access to the Prime Minister in exchange for donations.

Coincidentally, a current co-treasurer of the Conservative Party, Malik Karim, is the next biggest donor on the list. In August 2021, he gave a single donation of £750,000 to the party. In 2019, The Times reported that Karim earned £17.5 million from his company Fenchurch Advisory Limited.

The Guardian reported that Karim stood to make millions “by advising LV= on its £530m sale to Bain Capital”, a US private equity giant co-founded by Republican politician Mitt Romney. According to an advisor for Karim, “the sale of LV= To Bain Capital did not go ahead”. The advisor added that “There is no connection between Fenchurch and the Conservative party treasurer role.”

The unlikely next biggest Tory donor on the list is Heather Coffey, a woman with no next of kin who left the Tories £650,000 in her will after being “charmed by Boris Johnson”, who was her local MP. Her donation was split between two gifts of £450,000 and £200,000.

David Tilles, executive chairman of Mondrian Investment Partners Limited, gave the Lib Dems £500,000, while Gordon Peter Docherty, who gave the Socialist Party £500,000 is a bit of a mystery. The Electoral Commission only gives the name of the donor, so if they aren’t a public figure and have a reasonably common name, it can be hard to find out who they are. Thankfully, someone got in touch with me on Twitter after writing this artice to let me know that Mr Docherty, who died in 2020, was a lifelong socialist who seems to have left the Socialist Party a significant sum in his will.

This lack of transparency in party donations was brought up in Tuesday’s Standards Committee hearing. Richard Brooks, a Private Eye journalist, told the committee that “sometimes you look at an entry and you’re none the wiser… Mr Jenkins has just recorded an entry of £1500 shooting trip from a Richard Matthews. You look at Richard Matthews, no idea who he is. Google Richard Matthews shooting, you find some murder in America… we assume it wasn’t him.”

Private Eye editor Ian Hislop added that “it would help in your processes if you put a little more detail and then nobody would have to be suspicious.”

The next largest individual donor is Gurnaik Chima, who gave the Tories £500,000. He is the former owner of Bon Marché which his family sold to Peacocks Group for £51.3 million in 2002. He is now director of Summit Limited, whose net assets increased from £9 million to £22 million between 2020 and 2021.

The tenth biggest donor, Christopher Harborne, is a Thailand-based businessman with interests in aviation and blockchain companies. He is a former donor to the Conservative Party, but donated £6 million to the Brexit Party in 2019, making him the largest donor that year. Since the 2019 election, he has donated £465,000 to Reform UK, the post-Brexit name of the Brexit Party.

Just missing out on the top 10 is Lubov Chernukhin, banker and wife of former Russian oligarch Vladimir Chernukhin, who has donated £2.1 million to the Tories since 2012. The BBC has alleged that her husband “was secretly funded by a Russian oligarch with close ties to President Putin”.

Transparency and accountability are quite obviously vital to democratic processes. The UK government has often claimed to be the most transparent in the world, but public perceptions do not reflect this. 70% of the public is concerned by government secrecy according to a poll conducted by OpenDemocracy.

“There is a presumption here that it will be fine, all this, and I don’t think the public thinks at the moment that it will be fine. They think too many MPs are up to no good, and that doesn’t help anyone”, Hislop told the Standards Committee. If this is true for the financial conduct of individual MPs, how much more so is it for political parties?

(This article has been updated to include further information about Gordon Docherty who donated to the Socialist Party.)