The scale of the Government's defeat in the Lords over amendments to the Police and Crime Bill is important. 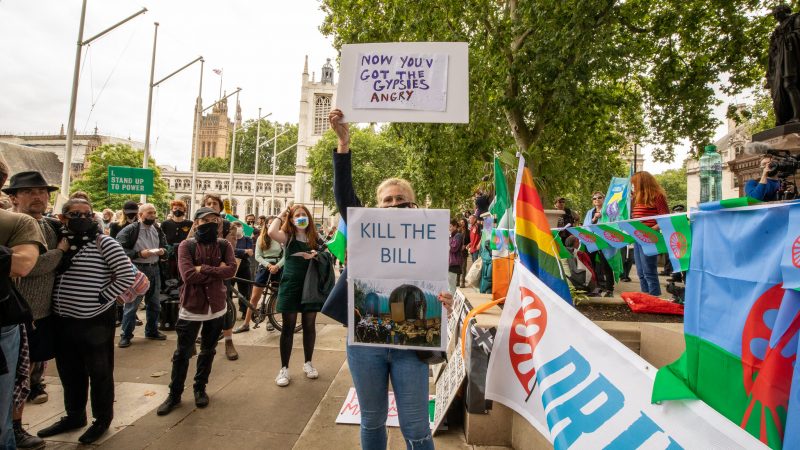 Last night the Conservative Party was defeated on fourteen amendments to the Police, Crime, Courts and Sentencing Bill in the House of Lords. Peers stayed until late at night to vote down the amendments, some of which were also rejected by Tory members of the Lords.

In November, the Government had quietly tabled extra amendments to the Bill, following the October Conservative Party conference in which Home Secretary Priti Patel had talked tough about new anti-protest laws in response to Extinction Rebellion and Insulate Britain protests.

Barrister Adam Wagner laid out the new anti-protest measures on Twitter in November, which criminalised ‘locking on’, blocking roads, allowing police to stop and search anyone near a protest without prior suspicion.

Of the fourteen votes on which the government was defeated, seven related to normal amendments which will go back to the Commons and can be sent back to the Lords, while the other seven defeats effectively delete the clauses which they proposed.

Tabling those additional clauses in the Lords without debating them in the Commons first seems to have produced somewhat of a backlash, which may have also been exacerbated by a drop in Tory morale related to the ongoing ‘Partygate’ scandal, according to a source in the Lords who spoke to LFF.

Outside of the defeats to the anti-protest measures, opposition Peers also succeeded in passing other reforms which did not get so much attention. In particular, one amendment made misogyny an aggravating offence in the sentencing of many crimes, while a ‘duty of candour’ for police was also passed. Labour said this law would help prevent a repeat of the police cover-up following the Hillsborough disaster.

“A duty of candour on police officers will make sure inquiries have the transparency they need to get the best possible outcome for bereaved families – like those in the Hillsborough, Grenfell and Manchester Bombing cases, as well as any future tragedies. I urge the Government to drop their opposition, respect the wishes of the Hillsborough families and others and support this amendment when it’s debated in the House of Commons later this year.”

A Labour spokesperson told LFF that they had sought to limit this amendment so that the new police powers would only apply to strategic highways, rather than all roads.

The scale of the Government’s defeat in the Lords is also important, since the House of Lords has seen far more Conservative Peers appointed under Boris Johnson’s tenure than in previous years. Since 2019, the opposition parties have seen their chances of winning votes in the Lords ebb away, as the Tories have used their powers to appoint more and more Tory Peers. One source in the Lords told LFF that,

“Almost a hundred Tory Peers weren’t there from the off. Even though they knew there were more votes to come, the Tory Peers started to drift away. People were unhappy with the way the clauses were lumped in, some unhappy with the heavy handed nature of the clauses, probably an element of people being unhappy with Partygate, and at this end there’s a much larger cohort of One Nation Tories. And I think there’s another element, the Government whipping operation was basically invisible. There was no operation to try to keep their numbers here.”

It seems as though the fallout from Partygate is affecting unity within the Conservative Party, to the extent that it is becoming unable to exploit its parliamentary majority. This loss of morale and unity is combining with an arrogant and incompetent attitude to legislative practice, which saw the Government try to cram authoritarian amendments into the Bill at a late stage, in an attempt to avoid scrutiny.

Baroness Jenny Jones also noted the Government’s arrogance in a statement released by the Green Party, saying, “This government is autocratic and arrogant, which is why they tried to pass some of the most draconian laws this country has seen, with minimal discussion. The House of Lords showed last night that it could be strong and determined in defence of civil liberties, but it’s time that people woke up to the connections between all the oppressive measures that this government is bringing forward.”

“We are seeing voter suppression, attacks on judicial review and a raft of legislation where Ministers are given increasing powers to make decisions that by-pass parliamentary scrutiny. They are creating an autocracy and it’s ironic that the Lords have ended up as the main defenders of democracy.”

Trying to pass such wide ranging and authoritarian new laws at a time when the government itself is accused of breaching lockdown rules looks hypocritical for the Conservative Party. They now have a decision to make about how committed they are to bringing in such harsh anti-protest measures, and whether they will choose to bring back some of these proposals in another bill.