Peddling typically prudish standards, the Mail has been quick to jump on a right-wing scandal-mongering article about the deputy Labour leader. 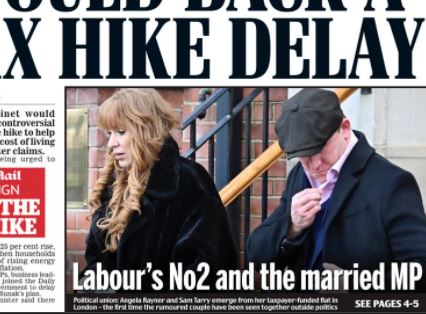 The story runs with the deliberately lurid headline: “Keir Starmer’s number 2 Angela Rayner, 41, spotted leaving her London home early in the morning with married MP Sam Tarry, 39, with tell-tale toothbrush sticking out of his pocket.”

The article that reeks of sensationalism and sleaze, attempts to whip up further furore by alluding to how Tarry ran Rayner’s campaign to become deputy leader, how the pair were pictured by the Sun on Sunday leaving Rayner’s ‘taxpayer-funded home’, how Tarry was elected in 2019 with “backing of Corbynite grassroots group Momentum” and how Rayner “separated from her husband of ten years in 2020.”

Showing a series of photos of Rayner and Tarry leaving the deputy Labour leader’s home, the report sarcastically makes reference to the fact that they could have been discussing politics, which would perhaps be the most logical reason for the meeting at a time when the country desperately needs hardworking politicians to talk over policies and political agendas.

Though, in a typical Mail fashion of castigating the left, the report writes that the pair could have “been holed up in Angela Rayner’s south London flat discussing the finer details of some new hard-Left policy, or fresh campaign tactics to bring down Boris.”

The authors, Daily Mail journalists Helen Weathers and Inderdeep Bains, proceed to concentrate on Rayner’s choice of clothing, insinuating it was expensive, and making reference to Tarry’s apparently dishevelled look.

Fuelling the politically-taunting, scandal-mongering overtone of the article, the authors pose a deliberately provocative question, asking: “So are they just good friends or are these pictures evidence of politics’ secret new power couple?”

The article exudes the sensational, right-wing journalism we expect of the Mail. Illustrative of poor quality reporting, the story wasn’t even the Mail’s own.

The Sun, equally right-wing and lurid, had initiated the ‘scandal’, sending a photographer to Rayner’s flat and running with the less provocative and more explicit headline: “Scum back to mine: Labour deputy Angela Rayner spotted leaving flat with married MP lover.”

No link to the Sun’s original report

The Mail’s rendition of the story makes reference to the Sun’s report but fails to link to it. Linking to original sources is a standard practise in modern journalism to enable transparency, coordinate collaboration in the production of journalism, and give journalists a way of telling complex stories concisely.

Though, sadly, there is nothing complex about Sun and the Mail’s Rayner and Tarry ‘hook up’ story other than it being an attempt by the right-wing tabloids to whip up sensationalist political furore against the opposition – especially it seems the left-wing faction of the party with the Mail repeatedly making reference to Tarry’s association with the so-called ‘hard left – while distracting from the mess Boris Johnson and his Conservative government are currently mired in.