Jacob Rees-Mogg told Conservative Home's Moggcast that he stands behind Boris Johnson, who he compared to Disraeli. 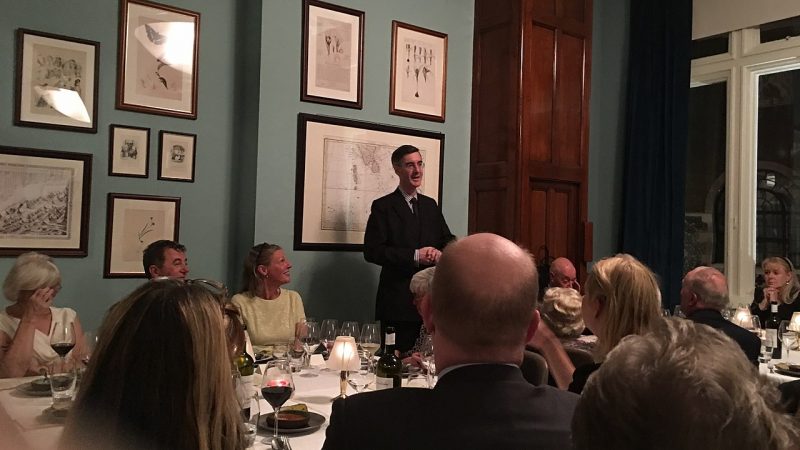 Jacob Rees-Mogg, a man whose very voice sounds like it’s sneering down at you from atop a neoclassical plinth constructed out of the dead labour of generations of your ancestors, does a fortnightly podcast for Conservative Home, currently on its 70th episode.

Here’s five things we learned from the right honourable haunted pencil this week:

Questioned about what he expects from senior civil servant Sue Gray’s investigation into the Downing Street parties scandal, he said that he didn’t expect any junior staffers to be named and that it all depends on what she finds out. ConHome editor Paul Goodman said it was difficult for the party to get out ahead of the conversation while always on the back foot, to which Mogg said that there are lots of good shots one can play in cricket on the back foot, and that he wished the England cricket team would bloody well play some against Australia!

‘There’s no other conceivable Prime Minister of this country who would have maintained as much of our liberty or would have been as reluctant to take away our liberty during Covid as Boris Johnson’, Mogg said.

This, despite the raft of draconian legislation that has been going through Parliament to limit the right to protest (Police and Crime Bill), allow the government to strip citizenship from anyone who could obtain another nationality (Nationality and Borders Bill), suppress voter turnout by requiring ID (Elections Bill), make it harder to hold military personnel responsible for crimes including torture committed abroad (Overseas Operations Bill) and redraw the electoral map in favour of the Conservative Party (Parliamentary Boundaries Bill).

‘18th century cabinet government was different but that’s not the government we live in’, Mogg said with misty-eyed regret, as the politician who would most obviously have loved to be alive during the height of the British Empire. It had been put to him that he had disagreed with Chancellor of the Exchequer Rishi Sunak’s decision to raise national insurance as part of a health and social care levy. He did not disagree that he had opposed raising taxes on wages, but said that as a cabinet minister with collective responsibility for policy, he had ultimately agreed with his colleagues.

Asking a multimillionaire like Mogg about the rising cost of living seems a bit pointless, since it will never affect him. Mogg promised that ‘supply side reforms’ and the benefits of Brexit would solve inflationary problems eventually. It’s just so reassuring that the Tories, in power for almost 12 years now, continue to employ the same hammer when presented with so many new and different nails. In particular he mentioned the forthcoming Procurement Bill which will somehow make government spending more efficient and ‘gene editing, which will help with the cost of food’ as the long awaited fruits of Brexit. Sunlit uplands just around the corner now lads, any day I’m sure.

Goodman asked Mogg why the government doesn’t simply scrap all the proposed green levies which the readers of Conservative Home blame for the rise in bills. ‘You can’t scrap green subsidies that the government is already contractually obliged to pay’, Mogg objected, not denying that he would love to do this but sadly resigned to the fact that he is not in charge of the Department for Business, who are not solely responsible to the representative sample of the British population who read Conservative Home.

Mogg said that the historical Prime Minister Boris Johnson is most similar to is Benjamin Disraeli: ‘They both set out their political philosophy very clearly in their earlier writings… they try to implement what they believe while dealing with the realities of government’.

A political historian friend of mine I put this comparison to said that this was actually fair, because “neither really had a philosophy’, and both were ‘amusing dilettantes”.

Thankfully the ‘Moggcast’ is only 25 minutes long, because I find myself drained of enthusiasm for life having to listen to him being treated like some kind of political oracle when any sane society would have long ago consigned him to the dustbin of history.

Now please excuse me as I return to the even more masochistic task of listening to an audiobook of ‘Sovereign Individual’, the neoliberal manual written by Rees-Mogg Senior which Silicon Valley dark overlord and Trump supporter Peter Thiel once said had influenced him more than any other book.