The UK government should take responsibility for addressing the raging income inequalities and the broken benefits system which have pushed so many into poverty. 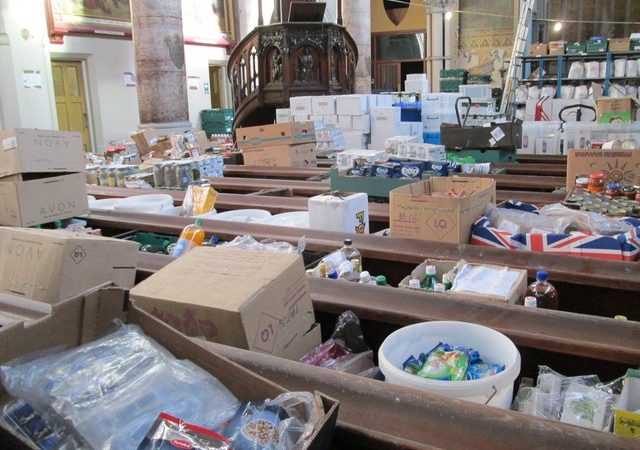 It’s been a record-breaking year but for all the wrong reasons. According to the Trussell Trust, 2.5 million emergency food parcels were given out this year by food banks to people in crisis – a 33% increase on the previous year.

In Wales alone, where almost a quarter of people are now living in poverty, 145,828 emergency food parcels were given out in the last year.

With the cost of living rising, energy bills soaring and Westminster’s cruel cut to Universal Credit leaving families in Wales facing the worst choice this Christmas between heating or eating, food banks have now become the norm.

But poverty should never be “normal”.

During the pandemic alone, usage of food banks has effectively doubled, and all indications are that this situation will continue to get worse.

As we approach twelve years since David Cameron stepped into Number 10 and after over a decade of Westminster austerity, our relationship with food poverty has become complicated.

Food banks have become a cornerstone of every community. They are both a symbol of pride and of community spirit in action. Yet they also symbolize the desperation that remains in our society and the disconnect between those that have, and those that have not.

The work that my local foodbank does in Bridgend has proven vital for so many, as well as the work conducted by Bridgend community pantries. However the very fact we need them shows that so much has gone wrong with society.

A systematic review by Imperial College London and Liverpool University found that austerity policies, particularly changes to the benefit system including benefit caps, delays and sanctions, and the reduction in welfare spending rolled out since 2010, can be directly linked with food insecurity and foodbank use.

And the consequences of lack of food are stark. It has a profound, devastating, and enduring consequences on the health, wellbeing, and livelihoods of people. Malnutrition reduces quality of life and increases the risk of developing other diseases. It lengthens hospital stays, and it is closely linked with mortality.

There seemed to be no let-up in this autumn’s UK Government budget, which simultaneously cut air and alcohol duty for jet setting intercity champagne drinkers, whilst snatching £20 a week from universal credit claimants.

What a way to set out your political priorities, and what a message to send to our communities.

None of this is inevitable.

Today, Plaid Cymru will be calling on the Westminster Government to back the ‘Right to Food’ campaign – a campaign that proposes a law to make the UK government responsible for addressing the raging income inequalities and the broken benefits system which have pushed so many into poverty. It would force the Westminster Government to scrap its cruel five week wait before a claimant receives a penny of Universal Credit – a main reason why people are forced to turn to food banks.

All Plaid Cymru MPs have signed up to this campaign in Westminster, and in Cardiff, we have tabled the same call to action for the Welsh Government too.

And in Wales, we’re proud to be doing things a little differently.

It was only last week that Plaid Cymru Leader Adam Price signed the Co-Operation Agreement with Welsh Government – a pioneering piece of politics that will change the lives of thousands of families in Wales for the better. Thanks to the Agreement, every primary school child in Wales will receive a healthy nutritious free school meal – a cause Plaid Cymru has long championed and called for that will go some way in helping tackle food poverty and a cause that is close to both mine and Adam’s heart as former recipients of free school meals.

But there are other things the Welsh Government can do whilst it waits for Westminster for grow a backbone. It must explore all options on ensuring that the right to food is embedded in cross-governmental policy approaches to poverty.

After all, all governments have a moral obligation to help people out of poverty. Access to food is a human right, as is the ability for people to feed themselves in dignity.

But I am under no illusion that many of the levers that can be used to tackle poverty are not currently controlled by Wales. Powers over welfare and Wales’ economy are still held firmly in Westminster’s grip. And whilst that remains the case, the cycle of poverty inflicted on our communities will continue.

That is one of the reasons that I support Welsh independence.

Because through independence, through devolving all powers to Wales, we would at last have the power and the ability to ensure Welsh citizens were protected once and for all from the inequalities that Tory Westminster policies have normalised through its cruel benefits system. Every lever would be at our disposal to help protect people from poverty and eradicate it once and for all. Wouldn’t that be a record that we would be proud to set?

Luke Fletcher is a Plaid Cymru MS for South Wales West, and spokesperson for the Economy in the Senedd