Activists from Palestine Action, a group committed to ending UK complicity with Israeli apartheid, has forced the shutdown of a factory implicated with supplying components used to make drones used by Israel. 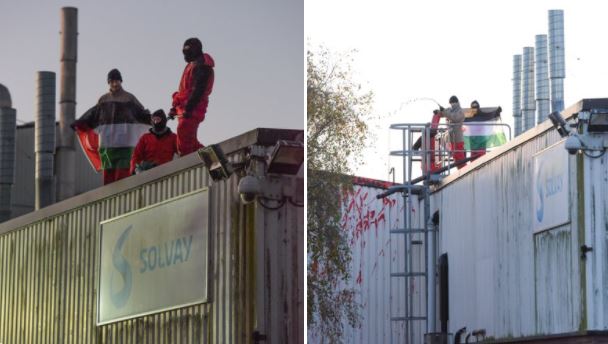 On Monday November 22, a ‘free Palestine’ protest involved campaigners occupying the roof of the Solvay factory in Wrexham, north Wales. The factory had subsequently halted production.

According to Palestine Action, the site manufacturers materials and adhesives for UAC Tactical Systems, a subsidiary of Elbit Systems, for the manufacture of military drones. The activists claim that the factory specifically supplies for the ‘Watchkeeper drone,’ which they say is developed and tested on Palestinians before being used by Western governments against the people of Afghanistan and Iraq.

Eight years later and concern is still being voiced about the UK’s involvement in the manufacture of drones, which according to Palestine Action are used largely for surveillance and targeting purposes, having recorded over 100,000 hours of use by the British and American coalition forces in Afghanistan and Iraq.

An industry supply chain document lists Solvay UK as a supplier to Elbit Systems, which helps produce the Watchkeeper. As Army Technology describes, it was in 2008 when “first flight of the Watchkeeper UAV was performed from Megido Airfield in northern Israel.”

“In March 2014, the Watchkeeper UAV was deployed for its first operational flights in Afghanistan in support of the British Army’s operations in the area.”

Palestine Action is dedicated to shutting down Elbit Systems, Israel’s largest private arms manufacturer and security firm. While headquartered in Haifa, Israel, Elbit Systems has ten sites in the UK. As Palestine Action notes, the company provides around 85% of Israeli’s land-based military equipment and drones.

Armed with the hashtag #ShutElbitDown, the pro-Palestine group calls to shut Elbit sites and their subsidiaries.

Palestine Action has been committed to taking action against Elbit Systems and its subsidiaries since August 2020 and, as of September this year, had shut Elbit sites down for 105 days of the past 365.

In a statement about the occupation of the factory in Wrexham, Palestine Action said how covering the plant with blood-red paint marked “ the company’s complicity in the murder of the Palestinian people.”

The action was supported by the Welsh Underground Network, a Marxist organisation advocating a socialist Welsh republic though community action. On the dismantling of the factory premises in Wrexham, a spokesperson for the Welsh Underground Network said: “Action like this is critical to ending the apartheid regime in occupied Palestine. We call on all comrades to come together to support this action and investigate similar businesses who support the Israeli regime to also take action against.”

The protest at the Solvay site led to four people being arrested. Palestine Action says the activists that were arrested had “put their liberty on the line to disrupt the production of crucial components for Israeli drones.”

‘We say no to British complicity’

“They [Solvay factory] produce parts for Elbit’s drone systems which are used against Palestinians. The Israeli apartheid regime buys these drones and uses them on Palestinians, and we say no to the British complicity.”

When pressed about the incident, Solvay said: “Solvay’s business practices strongly embed ethics and integrity. The Code of Business Integrity is the foundation for how we operate as a Group: Solvay observes and supports all laws and regulations governing the export and import of products, technologies, services, and information throughout the world.”

LFF reached out the Department for International Trade for commentary on the UK’s alleged complicity in supplying components that are used by Israel in the military conflict against Palestine.

“We consider all our export applications thoroughly against a strict risk assessment framework and keep all licences under careful and continual review as standard.”