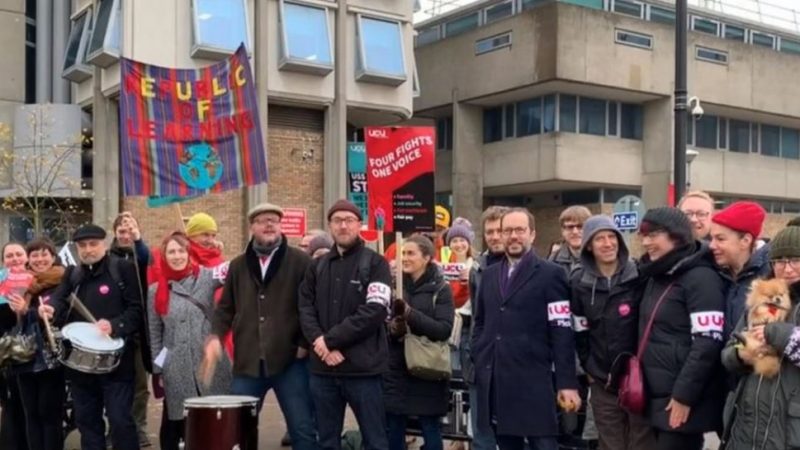 In a long-running row over the pay and pensions of university staff, academics from 37 universities have voted in favour of more strike action.

76% of the members of the University and College Union (UCU) who participated in the ballot, voted in favour of strike action. 88% voted in favour of action short of a strike. Out of the 68 universities the ballot covered, 35 met the 50% turnout threshold that is legally required for a strike. Two universities in Northern Ireland – Queen’s University Belfast and Ulster – do not require the strike threshold.

UCU, which represents over 120,000 academics and support staff, says universities needed to “urgently revoke the pension cuts and return to the negotiating table to avoid strike action.”

“These results are a clear mandate for strike action over pension cuts and should be heard loud and clear by university employers.

“Staff in universities have given their all to support students during the pandemic, but management have responded by trying to slash their guaranteed pension by 35%,” said Grady.

The row over pay and pensions has been going on for decades. The dispute was reignited due to what the UCU described as a “flawed valuation” of the valuation and management of the Universities Superannuation Scheme (USS). USS is one of the largest private pension schemes in Britain. Everyone from lecturers and researchers, to technicians, librarians and administrators at universities, higher education institutions and research centred are signed up to the pension scheme.

According to the UCU, the valuation was “carried out at the start of the pandemic when global markets were crashing.” As such, the union argues it will lower members’ guaranteed pension income by 35%.

Talking to LFF, Dr Andy Pickard, a former lecturer and head of the education department at Manchester Metropolitan University said:

“I think that there is no doubt that the cause for action is justified. University staff have suffered severely adverse ‘reforms’ to their pensions for the best part of 20 years. I am one of the fortunate generations who was able to retire under the ‘old’ pension provision which meant essentially, that any teacher with 40 years’ salary retired on half their final salary.”

“The effects of striking on students is more complex and is always of concern to their tutors. What always heartened me as a university teacher, is how supportive students were. They knew that that they needed to be taught by professionally supported and rewarded staff.”

NUS standing in solidarity with staff

The National Union of Students (NUS) has said it is standing “in solidarity” with staff who voted in favour of the industrial action, saying staff are being forced to do “more work for less reward.”

Hillary Gyebi-Ababio, vice-president for higher education at NUS, said: “Staff working conditions are our learning conditions, and we must stand together if we are to realise a system that is truly student-centred and democratised.”

Universities UK, an advocacy organisation for universities in the UK, described the vote as “disappointing.”

“While it is disappointing to see some UCU members think industrial action over pensions is justified, the union has failed to secure a mandate for industrial action in 31 of the 68 institutions, meaning fewer branches have reached the threshold than in previous ballots,” said Universities UK.

The vote does not mean industrial action is inevitable. It means however that strikes are likely to take place at dozens of universities across Britain, potentially before Christmas.