‘Keir Starmer should hold Sharma to account and ask him to update both Parliament and the public on progress made between this COP and the next.' 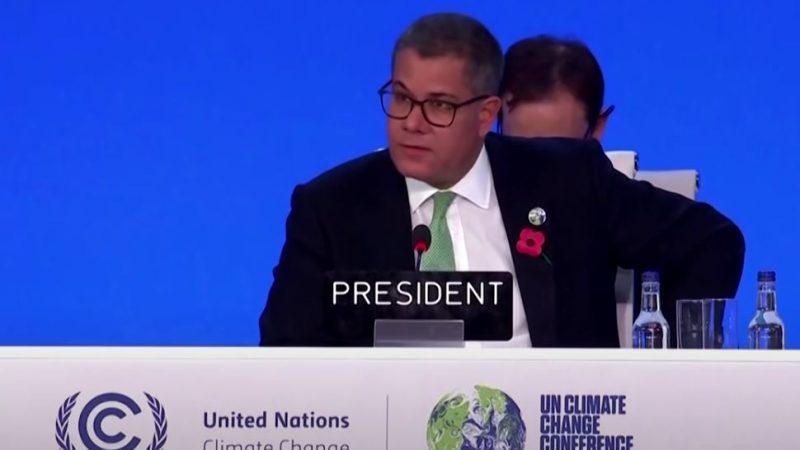 COP27 will be held in Egypt but, due to UN rules, the UK retains the presidency of the process until then. That leaves Alok Sharma in post as head of COP26 for another year.

COP26 ended as a qualified success. To an extent its conclusions reflected the findings of the IPCC SR1.5 and IEA net zero report, mandating an acceleration in action and new plans by 2022 in the context of the voluntary, non-binding UN regime.

For the first time a commitment was made to reduce fossil fuel use. The language, watered down at the last minute, abandon fossil fuels if we are to have a hope of limiting temperature rises to 1.5C.

One of the summit’s most important decisions was to mandate major emitters to return in 12 months and explain how their plans are aligned to the Paris temperature goals.

This makes the next 12 months incredibly important. Scientists agree that to keep 1.5C in play, global emissions must be cut by 45% by 2030. That’s a huge ask. Action must start now.

Alok Sharma is bullish about the impact of this year’s summit. “All parties can be proud,” of the outcome, he wrote, arguing that “for the first time it commits to a plan to move away from coal power and inefficient fossil-fuel subsidies” and “finalised the Paris rulebook” on issues including carbon trading and transparency.

Sharma is honest enough to admit that more work needs to be done. His work as COP26 president is “only just beginning”, he says, pledging to work with countries over the next year to “take action and honour their promises”.

Sharma’s continued presidency gives him and us the chance to have an outsized impact on the climate crisis. It gives Sharma the opportunity to work with governments to obtain the significantly increased pledges that will be needed for 1.5C to remain within reach, and to take action to fulfil pledges already made.

UK can shape the agenda for COP27

It gives campaigners and opposition parties in the UK opportunities to argue for change both at home and abroad, and to shape the agenda for COP27.

Sharma appears clear minded about the scale of emissions cuts needed by 2030 but speaks less of the need for action on climate finance, one of the most harmful failures of the summit.

“The EU and US refused to create a fund that the poorest countries could draw on for crisis response,” he says. Developing countries wanted a clear plan for a loss and damage funding facility to be agreed at COP26.

This did not happen, and focus will shift to Egypt next year. African nations already spend up to 10% of GDP a year on adaptation, while climate impacts could deliver a 20% hit to GDP in poor nations by 2050, say Christian Aid.

Sharma and the UK Government “have to lean in over the next 12 months” says Katie White, Executive Director of Advocacy and Campaigns at WWF.

“The UK Presidency has run with making 1.5C [above pre-industrial temperatures] the anchor,” she told the world’s press as COP26 drew to a close. “That’s a good thing. Over the next 12 months the UK Presidency will have to stay strong. They need to listen to the most vulnerable voices in the room. They’ll have to do more on loss and damage.”

Limits to what Sharma and the UK can achieve

There are limits to what Sharma and the UK can achieve. Pressure on recalcitrant nations is highest at global COP summits – only there are they under constant media scrutiny, their commitments and actions ruthlessly compared to those of peers.

Yet the Paris COP in 2015 proved that shuttle diplomacy in the run up to summits could bear dividends. The credibility, tact and perseverance of Laurent Fabius, the French lead negotiator, is credited with bringing about the landmark agreement made that year.

An opportunity for Labour

The coming year is also an opportunity for the Labour Party. Global conferences do not allow opposition parties much chance to shine. Media attention is on the global picture and the actions and words of those in power, not oppositions.

But Labour can build its own credibility and push for more global ambition by maintaining pressure on Sharma over the next year. Keir Starmer and colleagues should hold Sharma to account and ask him to update both Parliament and the public on progress made between this COP and the next, particularly on issues of pressing concern such as emissions pledges, finance for adaptation, loss and damage in the global south.

Labour should also relentlessly hold the government to account over the difference between its fine words and actions which threaten the chances of keeping with the 1.5C threshold.

Most obviously, while Sharma, Boris Johnson and others made much of their desire to ‘keep 1.5C alive’ in Glasgow, in the process calling on other nations to end the fossil fuel era, the government has plans for at least 40 new British fossil fuel projects. It is also continuing to invest in fossil fuel projects overseas.

If approved, the 40 domestic projects alone could emit 1.3 billion tonnes of greenhouse gases into the atmosphere, according to analysis by Friends of the Earth and the New Economics Foundation. Rishi Sunak’s decision to cut aid spending shortly before COP26 also damaged Britain’s reputation and made Sharma’s job harder.

As integrity and ethics in politics again take centre stage following revelations over second jobs, Starmer and colleagues should call out the government’s double standards. Forcing the cancellation of even some of these projects would help the UK meet its climate commitments, and would strengthen Sharma’s ability to negotiate with other nations.

Labour should also set out its own climate policy in simple, tangible terms. Research has shown that buzzwords beloved of the left such as ‘Green New Deal’ and ‘Green Industrial Revolution’ fall flat with the public. So do big numbers – hence Rachel Reeves’ announcement of £28bn annual investment to combat climate change, made at Labour conference, is all but forgotten.

Instead, Labour should focus on explaining the challenge ahead of us to a public that by and large want to take action but do not know how. They should explain what action they would take in government, how it would go further than the Conservatives have done, and how by doing so they would create jobs, reduce inequality and create better transport and energy networks.

There is an opportunity for Labour to take Boris Johnson’s frequent claim that Britain is a ‘world leader’ and, on this most important of issues, making it their own.

In the meantime, they should call for Sharma to do all he can ahead of COP27, and where they can build alliances on climate action with other centre left leaders: Joe Biden in the US, Olaf Scholz in Germany, and Mario Draghi in Italy, among others.