if the Tory party is failing to tackle prejudice against Muslims within its own ranks, one would hope the Equalities and Human Rights Commission (EHRC), would step in. 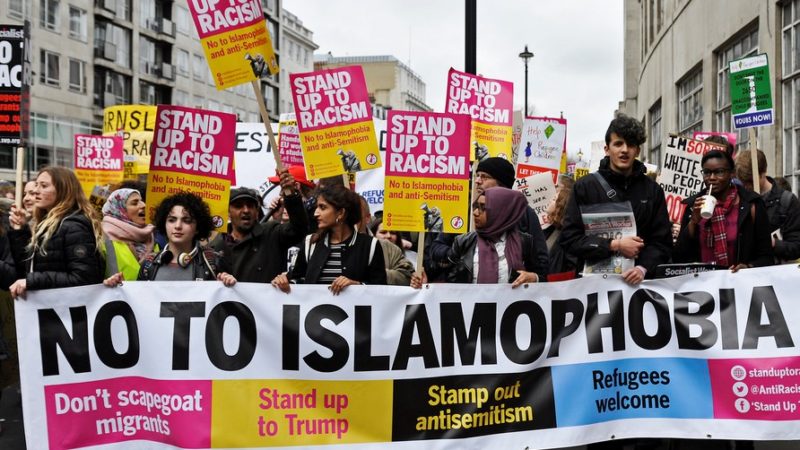 It’s Islamophobia Awareness Month, a month where the threat of Islamophobic hate crimes is highlighted and where people are made aware of discrimination against Muslims.

Figures released by the Home Office last month showed that just under half (45%) of all religious hate crime offences were targeted against Muslims. British Muslims make up just 6% of the population.

Around 58% believed that “there are no go areas in Britain where Sharia law dominates and non-Muslims cannot enter”.

Councillors who have shared posts calling for Muslims to be deported, described Saudis as “sand peasants” and shared material comparing Asian people to dogs have all been quietly reinstated. There seem to have been little to no consequences for Tory MPs who have retweeted the likes of Tommy Robinson. And of course, there’s the Islamophobic campaign run by former Tory mayoral candidate Zac Goldsmith against Sadiq Khan, as well as Tory leader Boris Johnson comparing Muslim women to letter boxes and bank robbers. Islamophobic incidents rose by 375 per cent in the week after Boris Johnson’s remarks, according to monitoring group Tell MAMA.

The issues of Islamophobia in the Conservative Party has not gone away, yet it’s received barely a fraction of media coverage after the publication of the Singh investigation which the Tories asked to look into all forms of prejudice in the Conservative Party. It was downgraded from an initial investigation which was supposed to look at Islamophobia.

The Singh investigation found that Anti-Muslim sentiment “remains a problem” within the Conservative Party. How independent was the Singh investigation? It failed to approach a number of prominent victims of Islamophobia in the Conservative Party, though it did approach the likes of Maajid Nawaz who has previously opposed the term Islamophobia. Baroness Sayeeda Warsi, former Tory chair, accused the probe of being a whitewash. She highlighted at least eight cases were victims wanted to give damning evidence but were ignored by the investigation.

So, if the Tory party is failing to tackle prejudice against Muslims within its own ranks, one would hope the Equalities and Human Rights Commission (EHRC), the country’s leading equalities watchdog, would step in. The Muslim Council of Britain first wrote to the EHRC over two years ago, asking it to investigate the Tory Party, though no action as of yet has been taken. They’ve since reiterated their call, even submitting a dossier of daming evidence.

The country’s leading equalities watchdog, it seems, is happy for the Tory party to implement its own plan, despite the evidence that it is failing to deal with the problem of Islamophobia among its ranks.

“This approach is consistent with our involvement with the Labour party who were also given an opportunity to address concerns through independent reports and action plans.”