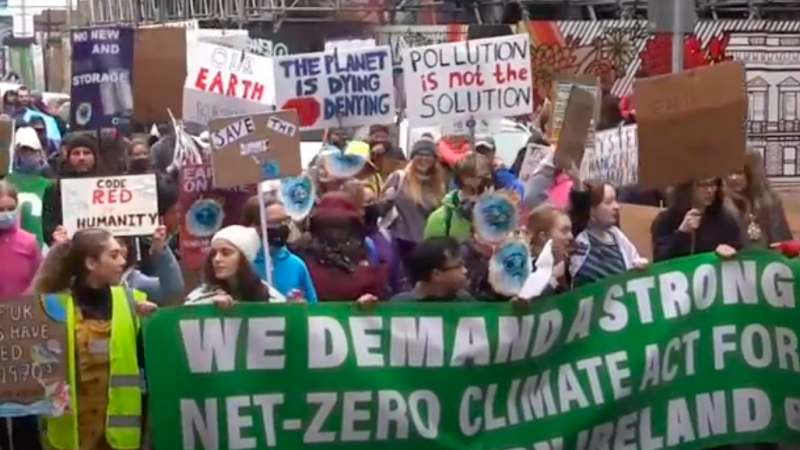 Environmentalists in Northern Ireland have welcomed representations from the ‘rights of nature’ movement at the Cop26 summit in Glasgow.

The legal and social movement, which seeks to afford ecosystems their own legal standing as part of a wider move away from a governance model of resource extractivism, has begun to take off in the six counties with three councils moving to recognise its principles this year.

Theoretically, rights of nature legislation could soon see communities bringing legal actions against polluters – governmental, commercial or otherwise – and could afford threatened ecosystems vital protections as existing checks and balances like judicial review come under attack in the UK.

But, at council level, the most visible implications of such motions are perhaps likely to be seen in the planning process.

Environmental lawyer Viviana González spoke to a nature and biodiversity panel at the UN climate conference about the drive’s implications for the Atrato river in Choco, Colombia.

In 2017, Colombia’s Constitutional Court recognised legal rights to the Atrato river in a landmark case, ordering the government to put a stop to logging and gold mining along the waterway.

“The Atrato is the third river in the world to have been officially granted rights for being understood as a living entity,” González told delegates.

“It is one of the most biodiverse places in the world. This is mainly thanks to the ethnic communities that live in its basin: afro-descendant groups and indigenous people who have developed a way to live in harmony with the river and its surrounding forests, in an interdependent way.”

Elsewhere, legislators have voted to transfer rights to a freshwater lake in Ohio, America, although that effort has since run into opposition from the US Federal Courts.

The lack of a codified constitution in the UK may complicate efforts to translate any immediate gains it makes locally into law – although they may cumulatively develop into an enforceable legal precedent over time.

Proponents of the rights of nature movement also say they see it as more than simply a legislative drive.

Earlier this year, two local authorities in Northern Ireland became the first branches of government on these islands to adopt motions recognising the rights of nature.

It first passed in Derry and Strabane, followed shortly by Omagh and Fermanagh District Councils. A similar motion is also making its way through Belfast City Council at present.

“This is a historic moment for the environmental movement here,” James Orr, Director of Friends of the Earth Northern Ireland, said

“The resolutions recognise that we are part of a biogeographical continuum and that is why it is important to work with all neighbouring councils to work together to protect the River Foyle and its tributaries, our shared oceans, the air we all breathe and share, our peatlands and our mountains

Councillor Bryan Smith, who tabled the motion at Belfast City Council, told LFF: “I like that this is a cross-party initiative – no political party owns it

“We’re obviously waiting to get a report back and see what’s in there. But we’re also conscious that we’re running out of time as well and that there’s a resulting need to push the process as far as we can on this front.

“The rights of nature movement is, to a certain extent, a response to the lack of action we’ve seen in the last couple of years, even as governments have set increasingly ambitious climate targets. In particular, after the Shell case in the Netherlands, I think we’re ultimately going to see a lot more environmental action decided through the courts.

“So, in that light, for me, this motion is almost about kick-starting a wider conversation.”