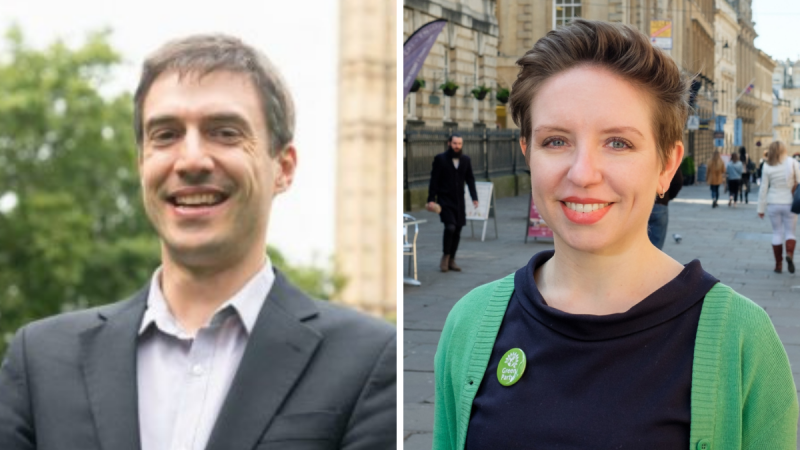 The two new leaders of the Green Party of England and Wales have now been elected.

Carla Denyer and Adrian Ramsay are now the joint leaders of the Green Party.

They take over as a new opinion poll once again puts the Green Party in third place with 9 percent support. The new joint leaders have pledged to make the party an electoral force able to win power and influence in every corner of England and Wales.

Denyer and Ramsay are succeeding Sian Berry, who took over as acting leader of the party in August 2021. Prior to that, Berry and Jonathan Bartley were joint leaders of the party after being elected in September 2018, winning 6,279 of 8,329 votes.

The other candidates were Martin Hemingway and Tina Rothery who stood to be co-leaders, and Ashley Gunstock.

She also proposed the first Climate emergency declaration in Europe, committing Bristol to go carbon neutral by 2030 and inspiring many organisations to follow her vision.

Speaking about how we are at a “crucial moment in history”, Denyer said: “It is clear that the other major political parties have failed to bring about the change that is necessary. More than ever before, it is vital that Green policies are adopted for the benefit of our climate and our communities.

“We are thrilled to have been elected as Green Party leaders, but this is now where the hard work begins, to elect more MPs and more councillors across the country. It is only by doing this that we can make the difference we all so desperately want to see.

“We are so grateful to all of the members who voted for us at such an important time for our party, the country and the world at large.”

Ramsay is a former Green Party deputy leader and he was part of the team that saw Caroline Lucas elected as the first Green MP.

While he was councillor in Norwich, Ramsay led the Green Party to unprecedented success in the city.

He also used to be the CEO of the Centre for Alternative Technology, leading the push for a net zero UK.

Ramsay spoke of how our “country is in crisis” and so we need “strong Green voices to make a compelling case for Green transition”.

He said: “Our country is in crisis – pumps running out of petrol, empty shelves in supermarkets and millions heading into winter fearing rising fuel bills. All worsened by our society’s addiction to fossil fuels.

“All of which would create sustainable, secure jobs with decent rates of pay – and help prevent the next crisis.”

Speaking about the experience of campaigning, Amelia Womack said: “We’re so proud of the campaign we ran, which inspired the grassroots of the party in a people powered movement, a councillor defection, unprecedented support from outside the party including celebrity support and the opportunity to shape the national media narrative.

“There has never been a more important time for strong climate leadership, and that is who we are and what we do. The vote was a decisive victory for liberation, inclusion and trans rights. We’re excited to see C&A deliver on this mandate for change.”

Commenting on the new leadership, Wales Green Party leader Anthony Slaughter said “Congratulations from Wales to Carla Denyer and Adrian Ramsay on their election as co-leaders of the Green Party.

“Carla and Adrian both bring a wealth of experience and skills to the role, and I look forward to working together with them to help the party continue to grow and achieve the increased Green electoral success our communities so desperately need.

He added: “The election campaign was strongly contested, and it was inspiring to see the passion, commitment and talent of other candidates who bring so much to our party.”

“Carla and Adrian are experienced, inspirational and committed to success in Wales,” she said.

“I look forward to working with them both to take the party towards the next general election and beyond.”

The turnout for the election was 22 percent, which one Twitter user said was “a low turnout” though still up on the 16 percent last time.