After Labour conference passed a Young Labour motion on Israel and Palestine, Unite's Tony Burke says Labour must be clear in its support for Palestinian rights. 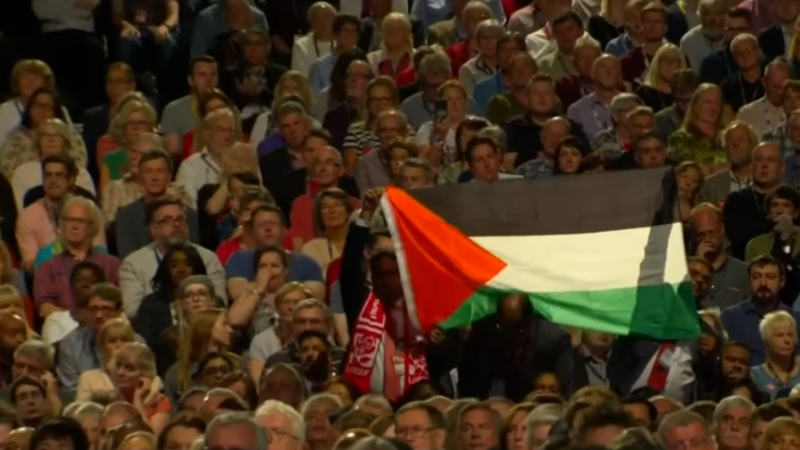 Tony Burke is Assistant General Secretary at Unite, and a Contributing Editor of Left Foot Forward.

Last week delegates at the Labour Party Conference took a momentous decision, committing Labour to stand with the Palestinian people.

In 2020, the TUC adopted a clear policy on Palestine – and now the Labour Party has aligned itself with TUC policy.

Last year’s TUC motion said the path being taken by the Israeli government “will be another significant step in the creation of a system of apartheid.”

In September this year, the TUC noted how Human Rights Watch had concluded that the Israeli regime is guilty of apartheid.

For Labour party members, standing in solidarity with the people of Palestine is something they can now be proud to do without fear, with a policy backed by conference.

The seriousness of the situation facing the people of Palestine is confirmed by the fact the International Criminal Court is holding an inquiry into abuses committed in the occupied Palestinian Territories since 2014.

Speaking up for Palestine is essential at this vital time – and all Labour constituencies can sign up to the Labour & Palestine statement published here.

Despite the clear support from UK unions, Labour’s Shadow Foreign Secretary Lisa Nandy is still equivocal arguing there is a lack of ‘balance’ in regard to the motions carried on Palestine.

Labour must now support effective measures including sanctions, as called for by Palestinian civil society, against actions by the Israeli state that are illegal according to international law.

The never ending occupation, the building of illegal settlements, the ethnic cleansing, and the massive human rights abuses are plain enough for anyone who wants to see it.

As Labour & Palestine has said, this must include action to ensure that Israel stops:

The Labour party was built on the basis of solidarity with the downtrodden and standing shoulder to shoulder with those facing oppression – whether that is here in the UK or outside of our borders. That is exactly what Labour must do.