The Greens have backed the BFAWU's 'Fight for 15' campaign 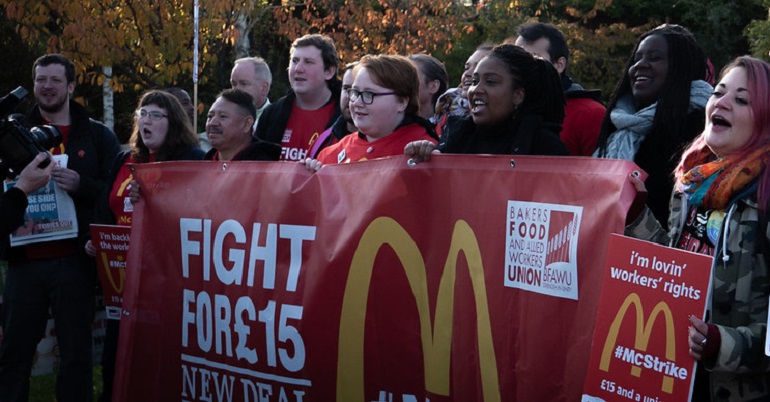 The Green Party has backed the campaign for a £15 an hour minimum wage at their autumn conference in Birmingham. This comes after members overwhelmingly voted for an emergency motion which expressed support for the Bakers, Food and Allied Workers Union’s (BFAWU) ‘Fight for 15’ campaign, and for “an end to age-based pay discrimination and for better working conditions for all workers”.

Speaking on the passing of the motion, proposer Alexander Sallons said, “Working as a hospitality worker in one of the most expensive cities to live in outside of London, you’re lucky if you can take 50% of your pay after rent and bills.

“We desperately need a £15 minimum wage and we need strong trade unions that are fighting for that like BFAWU, especially in some of the jobs most at risk of climate change like mine – coffee – and I’m glad that the Green Party has supported my motion.

The motion backed by party members also expressed solidarity with the BFAWU following their recent disaffiliation from the Labour Party, and requested that the Greens’ leadership inform the union of this.

Chair of the Green Party Trade Union Group Matthew Hull said he was “delighted” that the motion passed. He said, “I’m delighted that Green Party Conference has extended solidarity to the BFAWU following their disaffiliation from the Labour Party, and backed their campaign for a £15 minimum wage workers can truly live on.”

“With the Liberal Democrats nowhere to be seen, and the Labour Party failing workers at every turn, the Green Party must step up and truly represent working people in the face of this Tory government’s brutal attacks on our living standards. This motion is a statement of intent that workers and their unions have home in the Green Party.”

Earlier at the party’s conference, members voted to support publicly funded care for disabled adults, free at the point of use.