Co-leadership candidate said talking is "not a very good thing to get good at" and it "doesn't really align with my politics." 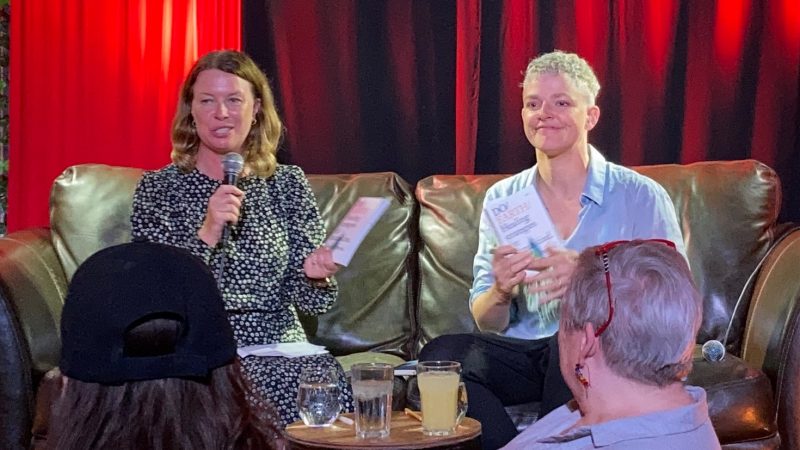 Irrepressibly smiley non-binary Green Party co-leadership candidate Tamsin Omond made fun of political and literary conventions at a Q&A for the launch of their book of climate change activism reflections and advice Do Earth in Forest Gate a few weeks ago.

“Have I said anything that’s written down in front of me?” Tamsin said at the end of a long spiel in which they had advised the audience to buy the work of black Detroit feminist adrienne maree brown ahead of Tamsin’s own “sorry gathering”.

Because of the leadership campaign, “I’ve got really good at going, ‘And now I’m going to speak'” Tamsin told the Wanstead Tap audience on September 6th. “It’s not a very good thing to get good at, it doesn’t really align with my politics: just put this white person on stage and they can just talk and talk and talk and talk”.

In response to a question about burnout, they advised the questioner “Do less!”, and said that instead of a narrative of tireless campaigning and red alert, the environmental movement should see activists as “flabby, wonderful aching sacs of flesh with big hearts and very busy minds. We need to be gentle with ourselves and with each other… I only learned these things through catapulting myself at a huge wall and dripping down it”.

Asked by their publisher Miranda West if they found writing the book cathartic, Tamsin frowned, mimed writing laboriously and likened it to “taking a really painful poo”.

Tamsin revealed that wife Melissa – who moved in a week before the first lockdown and who the campaigner married before the book launch – had advised that the audience would be forgiving if they knew Tamsin had had to give a wedding speech last Saturday, as well as all the political speeches they had been doing.

After the launch, the couple were going to Berlin on honeymoon, by train – in the last lap of the heated Green Party leadership election – for which the result is out on October 1st.

Tamsin’s running mate Amelia Womack would have to step up while Tamsin was away, they said – the joys of the party’s tradition of co-leadership.

The leadership result is out at 10:30am this morning…