The former Conservative MP’s clash with Gary Neville on GMB went viral, with people rejoicing as Neville ‘destroyed’ Currie in a row on Universal Credit that proves how out of touch the Tories are. 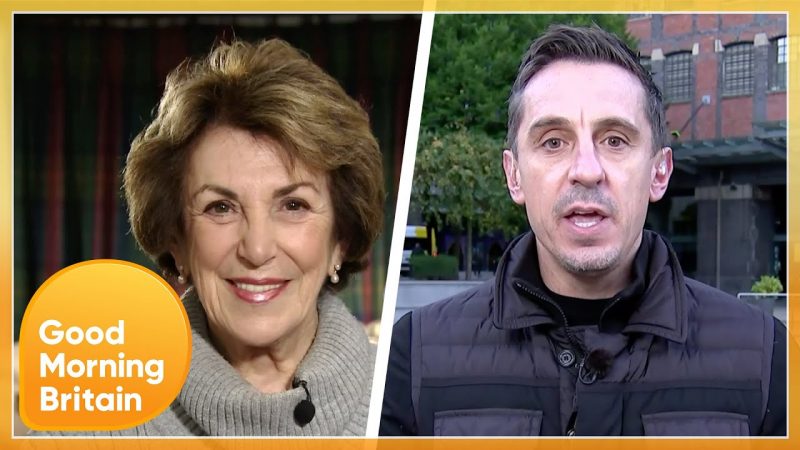 Neville – and many viewers – were left fuming when Currie suggested that those struggling financially should get “jobs as kitchen porters” in time for Christmas.

Affirming just how dispassionate and out of touch the Tories really are with the current climate and plight of everyday people, Edwina Currie’s comments created an outraged backlash, with many left aghast at the brazenness and ignorance of the former South Derbyshire MP.

Speaking from her comfortable home in Whaley Bridge, Currie pointed out how levelling up was doing “very well indeed” where she lives in the Peak District.

The presumptuous comments left the people of the Peak District reeling. Some took to social media to share their contempt, pointing to Whaley Bridge’s reliance on food banks and how disconnected Currie is with reality.

“Edwina Currie’s thinking is archaic and blinkered, she quite clearing is completely out of touch with the real world…,” someone tweeted.

The timing of Currie’s comments adding fuel to the censure, made on the day the UC uplift ended, with the government – echoed by Currie in the GMB interview – insisting it was only ever meant to be a temporary measure to help people through the Covid pandemic.

The policy, which cuts the £20 a week benefit lift to its pre-pandemic level, is – by admission of the government’s own internal analysis – likely to cause “catastrophic” suffering, pushing around 800,000 people into poverty.

A world apart from Edwina Currie’s claim that things are “just fine” in the Peak District, in the High Peak region of the Peak District – where Currie lives – Universal Credit recipiency is high.

In an analysis on how far Universal Credit has progressed in the High Peak compared to other constituencies, official figures published on the UK Parliament House of Commons Library, show that in August 2021, there were 5,826 households in the High Peak on UC.

As Currie bleated on about the “majority” of UC claimants being out of work, Ruth George, Councillor of Whaley Bridge, and former Labour MP of the High Peak, took the time to dissect the actual figures, pointing to how around two-thirds of UC claimants in the region are unable to work due to disability, caring or looking after very young children. Describing the figures as “shocking”, George wrote on Facebook:

“This is a cruel cut, just leading up to winter, when the cost of the basic essentials are all going up, it will lead to more people having to choose to heat their home or eat. And more children growing up in poverty.”

Food bank reliance on the rise

Discrediting Currie’s suggestions that “everything’s fine” in the Peak District further, is the region’s escalating reliance on food banks.

In May 2021, the High Peak Foodbank, providers of foodbanks throughout the area, expanded to bigger premises in the larger town of Buxton as a means of helping a greater number of people.

The expansion to a bigger venue was due to growing demand for the organisation’s services. The High Peak Foodbank is managed by The Zinc Project, which has seen a 400% increase in the number of referrals coming in for the foodbank in the past year.

Escalating food bank usage is not, of course, isolated to the Peak District, but is sadly evident up and down the country.

With the cuts to UC, coupled with gas and electricity bills being expected to soar, reliance on food banks in the UK is projected to increase further in coming months.

In the North East, for example, foodbanks are preparing for an increase in users in coming months, with one operator expecting “an avalanche of people to come through the doors of the foodbank in October.”

Meanwhile, a former Conservative MP has the brazenness to go on national TV and say levelling up in her northern constituency “is working.”

“Tories are so out of touch with reality.”

Gabrielle Pickard-Whitehead is a freelance journalist and contributing editor to Left Foot Forward reporting from the Peak District.