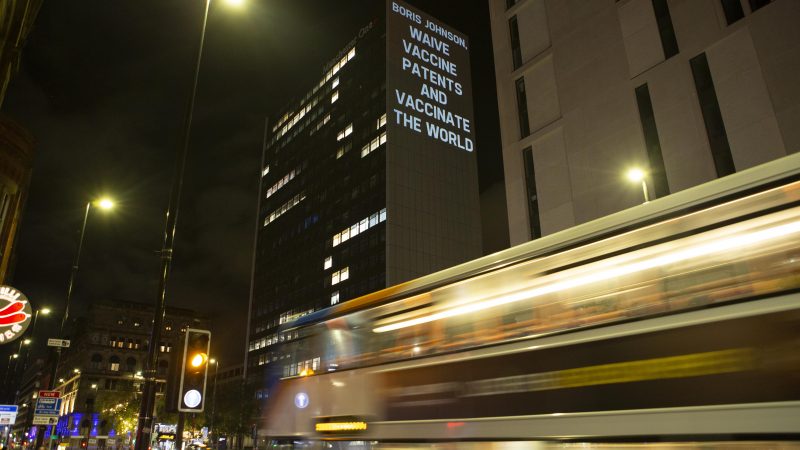 In another act of dissent aimed at Conservatives gathering in Manchester this week for the party’s conference, the words ’10,000 daily Covid deaths’ were projected onto a city centre tower over the weekend.

Carried out by the People’s Vaccine Alliance – a growing movement of health and humanitarian organisations urging that safe and effective vaccines are made available for all people, in all countries, free of charge – the message that was projected onto a building just metres from the conference hall, read:

“The world is watching. 10,000 people die every day from Covid-19 while the UK defends vaccine monopolies. Boris Johnson, waive vaccine patents and vaccinate the world”

The Conservative Party conference in Manchester this week has been disrupted by a flood of protest.

This latest demonstration comes one year after the UK blocked attempts to renounce intellectual property on Covid-19 vaccines, tests and treatments at the World Trade Organisation (WTO).

As the global justice and development organisation Global Justice Now notes, 3.5 million people have died from Covid-19 whilst the UK has blocked the waiver.

The waiver was first proposed by India and South Africa in October 2020. Those in support of a temporary abandonment on intellectual property rights on Covid-19 vaccines, as well as diagnostics therapeutics and medical devices, argue that scrapping these protections will allow poorer countries to manufacture more vaccines, diagnostics and other crucial medical tools required to fight the virus. It would enable more manufacturers to produce such tools without the threat of infringing on the intellectual property rights of large pharmaceutical companies.

In May 2021, President Biden announced support of the waiver, joining the likes of China, Russia, Spain and France. Despite support from a number of European countries, Germany has forced the EU to oppose the waiver. However, as Global Justice Now reports, with post-general election coalition talks be carried out in Germany, such opposition could change, and the UK could be the last opponent of the waiver.

While around 90% of over-16s have received their first vaccine dose and more than 82% have had both doses of vaccine in the UK, just 1% of people in low-income countries are fully vaccinated.

As the UK and other rich countries begin to roll-out third ‘booster’ jabs, many poorer countries are left waiting for donations.

Nick Dearden, director of Global Justice Now, commented on the urgency for Britain to end what’s referred to as ‘vaccine apartheid’ and join those fighting for the waiver.

“10,000 people die every day that the UK continues to block a vaccine intellectual property waiver at the World Trade Organisation. Each one of those deaths should be a stain on the conscience of the Prime Minister.

“Right now, Boris Johnson is enforcing a system of vaccine apartheid. At Conservative Party conference this week, he must finally get out of the way of countries producing their own vaccine. Failing to act will shame the UK for a generation or more,” Dearden added.

“The UK government says that ‘no one is safe until everyone is safe’ but they’ve bought the lion’s share of doses and now they’re blocking other countries from producing their own. This is highly dangerous as unequal vaccination risks new variants developing.

“The UK Government must tackle Covid-19 monopolies and push pharmaceutical companies to share their manufacturing know-how through the World Health Organisation. The Oxford/AstraZeneca vaccine was 97% publicly funded, – including a significant contribution from UK taxpayers. The Government must work with AstraZeneca and the WHO to make this vaccine a global public good,” Fitzpatrick continued.

More than 3 million people around the world have signed petitions calling for a ‘people’s vaccine’, which is patent-free, mass produced, fairly distributed and free of charge to everyone, rich and poor.

So far, the UK government has failed to listen.