The COP 26 international climate summit loomed over the 2021 SNP conference, but its legacy is contested by workers. 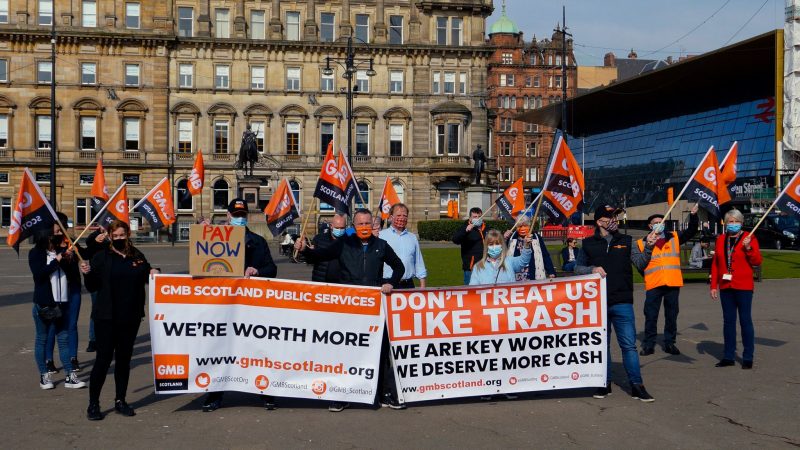 The COP 26 international climate summit loomed over the 2021 SNP conference.

The party made much of Glasgow’s status as host city, and Scotland’s stature of host nation, with a raft of climate policies (most of them reiterations of the Programme for Government announced days before), and repeated boasts about Scotland’s pledges to achieve net zero carbon emissions by 2045.

One video shown to delegates between conference sessions enthused: “We are a renewable energy powerhouse. With 25 per cent of all European offshore wind and tidal energy potential flowing through Scotland.”

The game among you will have noted the word “potential”. As Scottish Trade Union Congress (STUC) Deputy General Secretary Dave Moxham retorted to a public SNP advert making a similar claim the same day: “Yet we are net importers rather than exporters in the Low Carbon and Renewable Energy economy”.

He knows too well why, having been involved in the battles to save Scotland’s renewables capacity. In December last year, the engineering firm BiFab, which could have been the heart of windfarm manufacturing in Scotland, went into administration – shedding skilled jobs as it went. It signalled a grim truth; that talk of a ‘just transition’ that protected living standards as it shifted to green energy remained only rhetoric.

It wasn’t to be the last time SNP politicians clashed with workers on the frontline of any meaningful struggle to defend the environment. On Friday (10 September) the RMT union requested an urgent meeting with SNP MSPs who criticised workers for considering industrial action during COP 26, in a long running dispute with Scotrail bosses. The union complained that rather than intervening to help settle the dispute, the MSPs instead smeared a decision by the union’s “London bosses” (a misnomer since the RMT has its own democratic structures in Scotland).

The tone of the exchange was heated. Michael Lynch, RMT General Secretary said: “Personally, I find your parroting of the Murdoch-press’s hackneyed anti-union rhetoric about union ‘bosses’ disappointing.

“Time is running out and the position you and the Scottish government are taking is becoming increasingly isolated,” he added.

The SNP administration in Glasgow, Scotland’s largest local authority, is at loggerheads with cleaning workers, who are one hundred fewer in number today before council cuts. The city has visibly deteriorated, with the union running a high-profile campaign highlighting rubbish, rats and weeds breaking through the pavements.

Council services from libraries to leisure services have suffered, and many face closure. The city’s woes didn’t start with the SNP – there were disputes with its long-standing Labour administration. But the Scottish Government has cut Glasgow’s budget by 11 per cent over the 8 years. In total, Scottish local governments have lost almost £1 billion since 2013-14.

And yet at conference, council leader Susan Aitken made much of the COP 26 legacy for the city.

She said: “Glasgow, Scotland and the SNP can lead the way, and COP 26 can give us a pivotal moment to do so.

“We know what the prize is. Clean air, local food security, an end to food poverty, better, cleaner public transport, green spaces for all and sustainable, high value skills and jobs in a resilient modern economy.”

Jim Monaghan, a community campaigner and member of Glasgow Against Closures told LFF that the projected legacy was a distraction from the reality on the ground.

He said: “COP26 comes to a Glasgow where the council talk of the city like a shiny brochure. They see a future that is based on artist’s impressions and buzz words while communities struggle to hold on to the very basic building blocks – the sports fields, community centres and libraries where the actual community exists. Susan Aitken’s “resilient modern economy” is, in reality, a precarious future where maintaining social cohesion is a daily struggle.”

Responding to Aitken’s statement, GMB Scotland Secretary Louise Gilmour said: “Bluntly, there will be no legacy for workers unless the Scottish Government and Glasgow City Council end their delusion on green job creation and the state of the local services on which communities depend.

“The Scottish Government has presided over the mass export of tens of thousands of offshore wind manufacturing jobs. It’s been a decade of broken promises and there’s no green jobs revolution in Scotland for our working-class communities.

“And with the eyes on the world on Glasgow in the build-up to COP26, this is now about far more than just an industrial response to the city’s waste crisis, this is about restoring civic pride and building a better future for the city and all it’s communities.

“What the workforce struggling on the frontline of service delivery need to help them achieve that goal is for the city’s elected representatives to stand with them and not against them in their campaign for the investment Glasgow badly needs.”

In one of the more confusing developments of the conference, delegates voted overwhelmingly for a policy abandoned just days before by the Scottish Government. A National Energy Company, which first appeared in the SNP manifesto in 2016, before being announced to cheers by Nicola Sturgeon in 2017, and which then absorbed £500,000 before being quietly ditched days before the conference, is once again SNP policy. The developments indicates that desire for radical action linking class justice and environmental protection exists inside the SNP as outside, regardless to the wishes of party leaders and government.

Without the support of transport workers, cleansing workers and local communities the necessary economic transformation of coming decades will fall apart. Wages, services and conditions have been ravaged by over a decade of economic shocks and austerity, and most people cannot bear an additional burden.

Will conflict over the meaning of ‘change’ be the true legacy of COP 26?