'If our hard work is worth the nation's applause, it’s worth decent pay and fair conditions.' 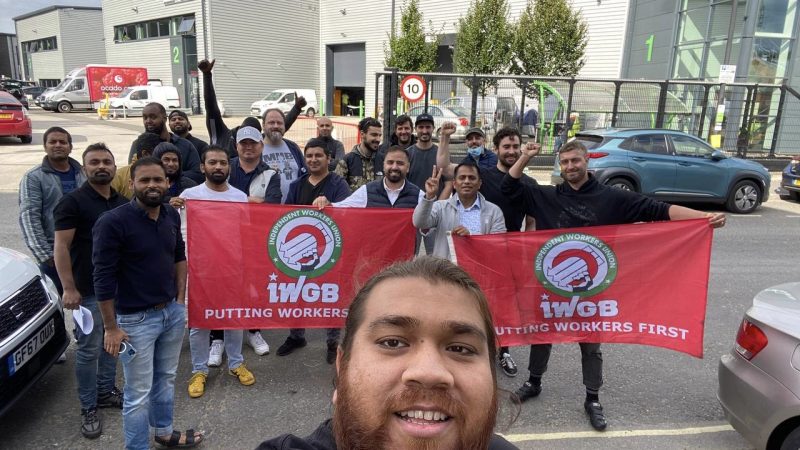 A union has launched a campaign against food delivery company Ocado after it was revealed that couriers were being paid less than £5 an hour.

The Observer reported on 21 August that drivers for Ocado Zoom, who are employed by a third party, had their earnings cut by 50% to 70% in June when the company brought in their new delivery partner, Ryde.

The newspaper claimed they had seen payslips that showed that drivers in the depot in West Acton were sometimes paid as little as £2.91 an hour.

Faizan Babar, who works as a courier for Ocado, said he had been forced to work six or seven days a week to support his family but is still struggling to pay bills.

He said: “We worked through lockdown even though I fall in a high risk category. I have colleagues who got ill, and lost their loved ones.

“If our hard work is worth the nation’s applause, it’s worth decent pay and fair conditions and that is all we’re asking for, for us and for our families.”

The union representing the workers, IWGB, launched a campaign against Ocado after drivers were threatened with job losses following the whistleblowing.

The majority of Ocado Zoom workers have now voted to take strike action, with the IWGB promising an escalating protest campaign unless Ocado agrees to enter negotiations.

Alex Marshall, President, IWGB, said: “Ocado is moving to switch from the notoriously exploitative gig economy model to an equally unethical outsourcing one based on zero hours contracts.

“Ocado is misleading the public whilst continuing to exploit these key worker heroes. We are ready to fight until they get the pay, conditions and stability they deserve.”

In addition to pay, concerns are being raised over health and safety issues and the impact of unfair, opaque processes for job distribution, shift allocation and terminations.

Workers’ demands include trade union recognition, being brought in-house as workers, appropriate health and safety protections and £16 per hour pay.

Since the revelations surfaced, over £1000 has been donated to the strike fund.

In a statement on Wednesday, Ocado said that they would end the third party supplier arrangements and have offered all existing drivers a position in house.

“As part of this process, all drivers currently working for our third party suppliers are being offered the opportunity to work directly for Ocado.

“All driver roles at Zoom Acton pay the London Living Wage by the hour and include uniforms, delivery vehicles and motor insurance. Contracts can be adapted for the flexibility people need from full time to fully flexible.

But the union said that no delivery drivers have been contacted directly to be offered in-house positions.

They claim that physical job adverts have been posted in the depot for another third party partner called Job and Talent.

Ryde did not respond to a request for comment from LFF but in a previous statement, a spokesperson from the company said: “As a “rider-first” last-mile delivery business, we put the welfare of our self-employed contractors at the heart of everything that we do.

“We are concerned by recent media reports and are investigating the specific instances, although from an initial assessment of driver data we strongly refute that drivers are being paid below minimum wage for their work with Ryde.”