Shadow home secretary pitched Labour as the party of law and order at the conference. 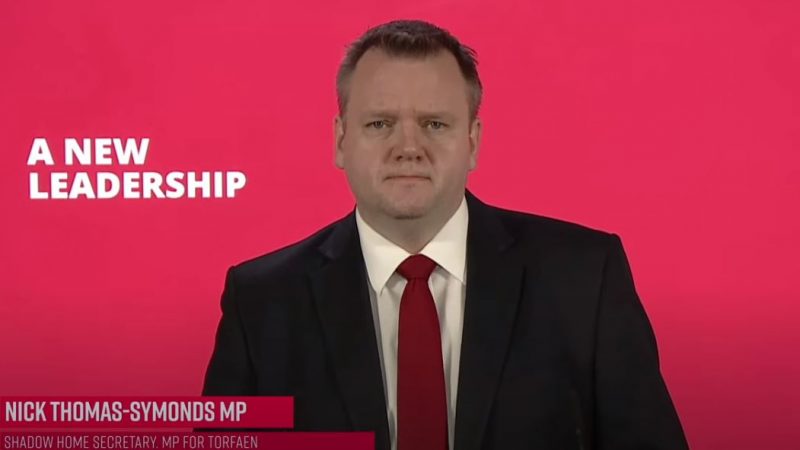 In an attempt to reposition Labour as the party of law and order, the shadow home secretary Nick Thomas-Symonds told delegates during his conference speech that he will not take money away from police forces.

A former barrister and MP of Torfaen, Nick Thomas-Symonds was appointed as shadow home secretary in April 2020, as part of Labour’s new shadow cabinet following Starmer’s victory in the Labour leadership race.

Talking to an audience that included John Apter, chair of the Police Federation of England and Wales, at this year’s party conference, Thomas-Symonds urged voters to “look again” at Labour on law and order.

Accusing the Tories of “defunding the police” through a decade of cuts, Thomas-Symonds told delegates in Brighton:

“No Labour home secretary will ever defund the police. That’s not our party, that’s the Tory party, and they have spent 10 years defunding our police.”

“The safety of our communities is at risk from the government. The reality is that the Conservatives have failed on crime.

“This home secretary likes to talk tough, but she never delivers. She says she backs our frontline police officers and staff, but then insults them with a pay freeze.”

“The Conservatives are the party of crime and disorder. They are soft on crime and soft on the causes of crime,” he continued.

By saying the Labour will not follow demands to take money away from existing police forces, Thomas-Symonds has been accused of distancing Labour from the Black Lives Matter (BLM) movement.

Black Lives Matter UK calls for to divert policing resources and funding into community projects and other social services and ventures as a means of protecting the public.  BLM UK has said its use of “defund the police” is centred on investing in programmes that “actually keep us safe like youth services, mental health, and social care, education, jobs and housing.”

By pledging not to defund the police, Labour is being accused on turning its back from Black Lives Matter. The right-wing newspaper the Express was quick to jump on such accusations, saying Labour is distancing itself from BLM and is that Thomas-Symonds is appearing to appeal “to voters who deserted Labour under Jeremy Corbyn to give them another chance.”

‘Tough on crime, tough on causes’

The Torfaen MP’s speech follows an interview with The Times, where the shadow home secretary said Labour will be tough on crime and that the party would continue deportation flight if it entered government and would never bring back freedom of movement.

By announcing Labour will be “tough on crime, tough on the causes,” the shadow home secretary is readopting Tony Blair’s slogan in a bid to restore the party’s reputation on law and order.

The shadow home secretary’s tough stance on law and order has not been entirely welcomed, with some recognising it as an attempt to win over Tory voters.

“Why are centrists OK with Nick Thomas-Symonds tyring to out-nasty Priti Patel?

“Seriously, what is the point? Oh yes, to attract Tory voters who are never going to vote Labour and to repel everyone who might.”

“Why is Nick Thomas-Symonds trying to give Priti Patel a run for her money?” another tweeted.