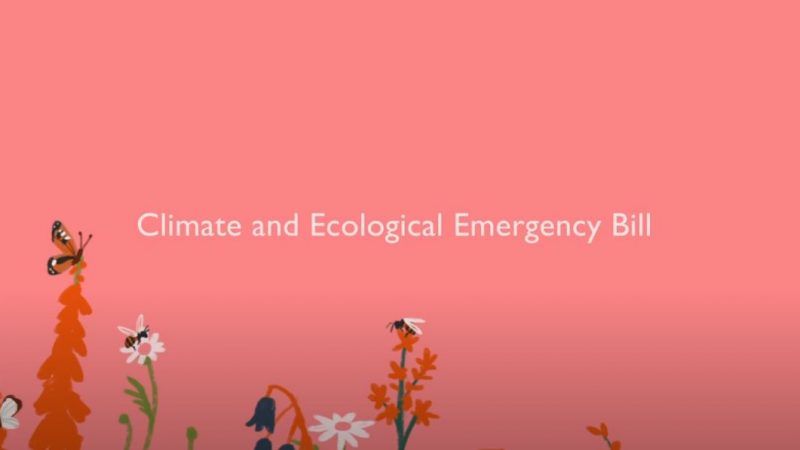 Charlie Jaay is a freelance journalist with special interests in the environment, human rights and civil liberties.

The Climate and Ecological Emergency (CEE) Bill is scheduled for its second reading in the House of Commons this Friday (10/09/201).

Drafted by campaigners, legal experts, scientists and academics, and tabled as the Climate and Ecology Bill, the proposal acknowledges the link between climate change, biodiversity loss and ecological deterioration. It calls for an emergency strategy for the UK to address these crises, while making a legally- binding commitment to limit warming to 1.5C.

115 MPs, nearly 30 Peers, over 100 councils and 200 organisations have all so far pledged their support of the Bill. The recent addition of Baroness Verma, a Conservative, now means the Bill has all party support.

Although MPs from different parties are supporting the Bill, only the Greens, Lib Dems and Plaid Cymru are official backers.

Caroline Lucas, Green Party MP, who introduced this Private Member’s Bill to Parliament, said despite all the climate targets set by the government, we’ve seen “almost no progress since Parliament declared a climate emergency more than two years ago.

“That’s why the Climate and Ecological Emergency Bill is needed.  It focuses not on arbitrary dates but on the agreed temperature threshold of 1.5C.  It recognises the climate and nature crises need to be tackled together and, through the use of a Citizen’s Assembly, it makes citizens part of the vital transition to a carbon-free future,” said Lucas.

”It’s time the Government stopped sheltering behind empty slogans and targets with no plan for how to achieve them, backed this Bill and started to show the climate leadership it frequently boasts of but has yet to deliver,” she continued.

Ed Davey MP and leader of the Lib Dems said his party will back this bill because they believe it is what we need to lead the world on cutting emissions.

“The climate is changing before our eyes, we are seeing flash flooding in London and heat waves across the country. We need to act now and this bill is our way to do that. The COP26 conference this year is our last, best hope to stop world changing climate change.

“We hope that the Tories back this bill, and use it to show the world we are acting to cut emissions and stop the climate emergency,” said Davey.

Sarah Olney, Liberal Democrat MP and co-sponsor of the Bill, described the Bill as ‘hugely important’, stating: “The CEE Bill is hugely important as it would force the Government to make clear its commitment to addressing the climate emergency. It is the greatest threat facing humanity yet there is widespread and understandable concern that Boris Johnson has not yet decided whether or not he cares about it.”

Although the government’s own climate adviser, the Climate Change Committee, has said the UK is not on track to meet its carbon budget target for the period 2023-2037, fossil fuel projects at home and abroad are still funded, Cambo oilfield has the go ahead, widespread airport expansion is planned, and construction of HS2 continues.

According to Dr Amy McDonnell, campaign co-ordinator for Zero Hour, the campaign to get the CEE Bill passed into law, current legislation and policy in the UK are not enough to address the urgency and scale of the response needed to tackle the problems we face.

“The Climate Change Act, in its day, was groundbreaking – but the truth is that the science has moved on and the 2050 net zero date is no longer fit for purpose. It would in fact only give us a less that 50% change or limiting global heating to critical temperatures – and this is only if the whole world follows suit, and of course depends on the government hitting targets, which it is not”, Dr McDonnell said.

Clive Lewis, co-founder of the Global Alliance for a Green New Deal and signatory to the Climate and Ecological Emergency Bill, shares a similar sentiment, citing government inaction over climate change as a major concern.

“It has been repeatedly shown that the collective action of society through a good and willing government can make a difference. The Climate and Ecological Emergency Bill, along with the Green New Deal Bill and the Global Declaration for a Green New Deal, show just such a possibility.

“This makes our own government’s inaction – despite public concern – a political choice, motivated by a vested interest in destructive and unequal growth fuelled by oil and gas. As such, climate change continues to destroy communities by making our environment unliveable now and for future generations,” said Lewis.

If passed into law, the CEE Bill would take into account our entire carbon footprint, both at home and abroad, whilst halting and reversing nature loss.  Like the Climate Change Act 2008, Abolition of the Death Penalty in 1965 and  Decriminalisation of Homosexuality in 1967, which all started as Private Member’s Bills, it has the potential to bring about profound changes.

Zero Hour is calling on everyone to join the campaign, for supporters to get in touch with their local group, and for MPs to support the Bill by attending the debate on Friday.