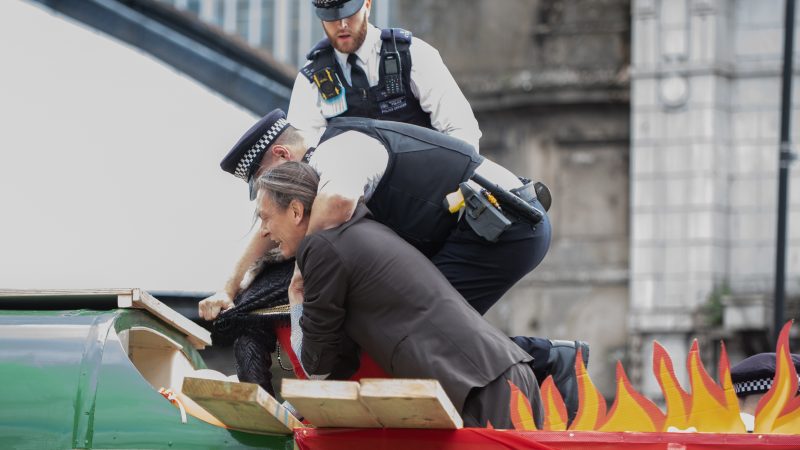 The Met Police have said that their use of force was “reasonable and proportionate” after officers were allegedly seen wielding batons and throwing punches at an Extinction Rebellion (XR) protest on Tuesday.

On the ninth day of their two-week Impossible Rebellion, XR activists drove a bus to the junction south of London Bridge in order to block traffic across the river.

The Guardian reported that they witnessed officers from the Met use force against the protesters.

They reported that police officers climbed the sides of the bus, struck and wrestled protestors and appeared to put one activist in a headlock and beat them.

A window of the bus was smashed and videos showed officers brandishing truncheons.

Multiple arrests were made.

But the Met Police have released a statement defending their actions, saying they took action against the protesters to prevent “unreasonable disruption”.

It said: “At approximately 1:30pm on Tuesday, activists drove a bus and parked it in the middle of a major junction on the approach to London Bridge. It is clear that this was an attempt to cause a major disruption to one of London’s busiest bridges.

“Seeing this, officers nearby took immediate action to prevent any unreasonable disruption to the highway, and to detain those attempting to cause disruption or who were obstructing officers in the lawful execution of their duty. Arrests were made.

“Undoubtedly, we believe this swift action prevented some protesters from setting up further complex lock-on devices which were inside the bus.

“Given the circumstances and likely disruption to the community, our initial assessment is that their use of force was reasonable and proportionate.”

This comes amid controversy over the proposed changes to the The Police, Crime, Sentencing and Courts Bill.

Police forces will be allowed to criminalise protests they believe constitute a “public nuisance”, including imposing starting and finishing times and noise limits.

XR are holding two weeks of protests, which they have called the Impossible Rebellion.

The group launched the disruptive actions with an occupation of Leicester Square where they erected a huge pink table.

Other protests included health workers staging a “die-in” outside JP Morgan, four members of XR glueing themselves to Selfridges in Oxford Street, and an occupation of the Science Museum.

The Met Police have made almost 500 arrests during the XR action since 22nd August.