'Warmongers and dictators are not welcome here.' 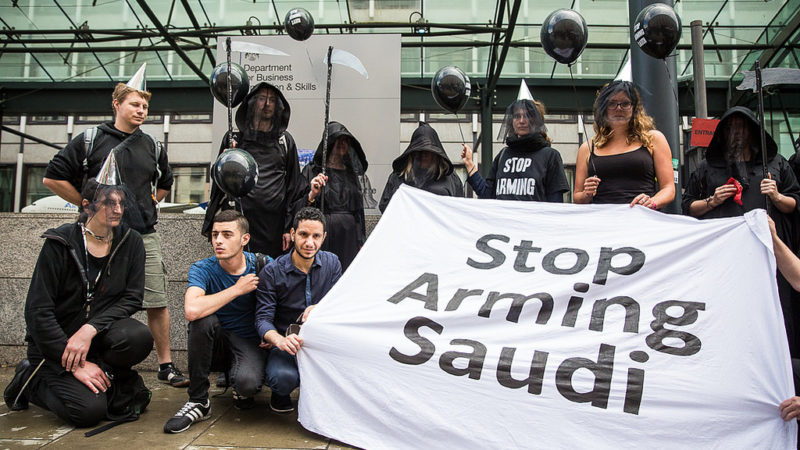 Campaigners against the arms trade have vowed to cause further disruption and carry out further protests against the Defence and Security Equipment International 2021 arms fair (DSEI) which is due to take place in London next week.

Protesters have already tried to block the transportation of weapons and equipment to the world’s largest arms fair which is visited by arms dealers and some of the most repressive regimes in the world. The event will run next week from Tuesday 14 September to the 17th.

The Campaign Against Arms Trade says that DSEI would not be possible without the support of the UK Government and that it is supported by the Department of International Trade and the Ministry of Defence.

A statement from the group said: “Saudi Arabia, which continues to wage a brutal war in Yemen, the cause of the world’s worst humanitarian crisis, and which ruthlessly represses dissent at home, is a perennial presence at DSEI, honoured guests of the UK government.

“Last time in 2019, the official UK government guest list included delegations from Bahrain, Bangladesh, Colombia, Egypt, Israel, Pakistan, Saudi Arabia, and Uzbekistan, all listed at the time as “countries of concern” by the Foreign & Commonwealth Office.

“Preparations for the arms fair have already been the subject of massive protests, with activists blocking roads with cars, clambering onto tanks, locking themselves to digging machines, and draping banners from the top of police vans.

“Some have even made camp in the road overnight, as they seek to oppose the setting up of the arms fair. The opening day of the arms fair on Tuesday will see even larger protests, with hundreds of activists expected to make clear that the merchants of death are not welcome in London.”

The Mayor of London Sadiq Khan has also been a vocal opponent of the arms fair. He tweeted last month: “The DSEI arms fair has no place in our city.

“For London to be used as a marketplace for those wishing to trade in weapons to countries that abuse the human rights of their citizens goes completely against our values.”

​​Siana Bangura of Campaign Against Arms Trade said: “The DSEI arms fair is a moral disgrace and an insult to the people of London. As the Mayor of London has emphasized, the weapons that DSEI delegates will be eagerly ogling in the Excel Centre are often the very same that have devastated the families and homelands of communities living a stone’s throw away, and across the city.

“We will be there on Tuesday to tell the visiting warmongers and dictators that they are not welcome here.”

The Department for International Trade has been contacted for comment