We can't just wait for a Labour government to swoop in, TUC Congress hears. 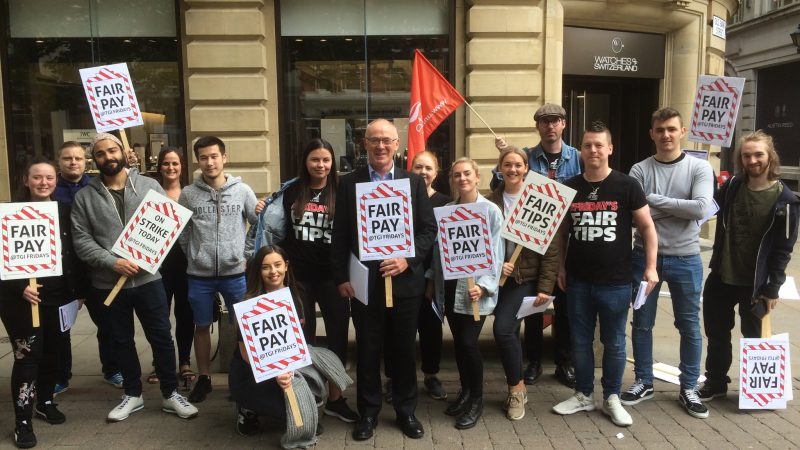 Pictured: A Unite strike at TGI Fridays in 2018.

Young people are not hostile to unions: huge numbers are dissatisfied with the world of work, journalist Eve Livingston tells this year’s TUC Congress. But for millions of young people, when they look for solutions to their workplace issues, it is influencers and blogs giving the most relatable advice – not trade unions.

Left-wing laments for young workers’ low rates of union membership are nothing new. Fewer than one in ten under-24s are members of a union. But too rarely do we hear evidence-based solutions, or the experiences of organisers who are starting to change that.

At the TUC Congress’ virtual launch of journalist Eve Livingston’s new book, ‘Make Bosses Pay’, out next week from Pluto Press, union activists discussed their experiences of organising young workers during the pandemic – and how unions can change to win among generations who have never seen union membership as the norm.

Unions were built for a very different economy to the one that young workers occupy today. The youth-dominated hospitality industry often sees workers shift between several jobs a year, on insecure contracts with no guaranteed hours, and no union recognition.

It’s a stark contrast to consider that around half of union members have been working for the same employer fo more than a decade, according to the ONS. That creates a risk-aversion in some unions: it is a gamble to invest in organising workplaces where there are currently few members, when there is a need to ‘service’ current long-standing members. But it’s a gamble that unions must take, Livingston says.

Start-up unions like the Independent Workers of Great Britain, the App Drivers and Couriers Union, and United Voices of the World have leapt in to fill some of that void. But the past year has also seen high profile wins for big, bold, and deep union organising from some of the more established unions.

Scotland-based Unite hospitality organiser Bryan Simpson recalls that when Scotland’s largest hospitality workplace, the Scottish Events Campus, tried to ‘terminate’ more than 600 workers via Facebook at the start of the pandemic, ‘our members got to work’.

From having just 30 or 40 members there at the beginning, they organised colleagues with a high-profile media campaign, that forced the owner, the Compass group not only to reinstate the workers on 100% pay, but to pay them up to £13.30 an hour at the Louisa Jordan which became a makeshift hospital and vaccination centre.

As a direct consequence of that, Compass have now agreed a range of new policies which shall apply to every venue in the UK, includes London’s Excel centre, Wimbledon, and Twickenham – which means all 60,000 workers will receive the real living wage regardless of age, Simpson says, alongside a proactive sexual harassment policy and minimum-hour contracts across all 70 venues.

“Where is this going to he rolled out first? The Scottish Events Campus where it all started. From the Unite taking action back in April 2020, their actions will affect as many as 60,000 workers across the UK,” Simpson told the fringe event.

Similarly, Scotland’s large hospitality employer, the G1 group sacked 2,000 workers by phone, a similar media strategy kicked into gear, battering the reputation of the employer. Within 48 hours, the company was forced into an embarrassing U-turn and reinstated all 2,000 workers, Simpson says.

These actions highlight a potential shift in organising when there are – at first – few union members. This is unions as megaphones, naming and shaming poor employers, creating social media campaigns and news stories that hit the reputation and profits of bad bosses. “That’s how we built 4,500 new members in Scottish hospitality over the last three years,” Simpson says. Often the negative publicity leads to wins before ballots are anywhere near being sent out.

“It is bold, visible and deep organising that recruits young workers and keeps them involved, not ad hoc firefighting,” Eve Livingston says.

Understandably, repealing the Tories’ successive anti-trade union laws is sometimes seen as a key plank of unions’ strategy for re-unionising the workforce. But young members don’t avoid unions because it’s difficult to strike. Many don’t know what a union is, have never been asked to join, and are offered it as a form of insurance rather than membership of a movement, the Bakers’ Union’s Sarah Woolley suggests. Rather than going to them with ready-made answers, “we have to ask them how they’d make changes in their workplace if they could – whether that’s a new toaster in the canteen or removing a bullying boss,” Woolley says.

Nor is the organising landscape – and its laws – the same across the UK. Wales TUC General Secretary Shavanah Taj noted that Wales has fewer legal restraints on unions: “If you work in the devolved public sector, the 40% ballot threshold [of members voting ‘yes’ to strikes] doesn’t apply, there’s no monitoring of facility time, no conditions around deductions of subs, and agency workers can’t provide cover during strikes.” While Labour has made pro-union legal changes in Wales, there’s no guarantee Labour will come to the rescue UK-wide: “Not even Labour withdrew anti-union legislation while we were in power. We have to learn from each others’ wins and share them,” Woolley points out. Sometimes unions have to act as if the anti-union laws aren’t there, Simpson says. Prison officers – barred from striking – have nonetheless taken illegal industrial action in recent years and won.

Legal changes are not a panacea. Unions also need to look like their members, Shavanah Taj says. While the past year has seen the election of two high-profile women to the helm of the biggest unions, Unite and Unison, these exceptions only test the rule: union executives remain largely white, older, and male. Taj called for unions to adopt positive action policies – in effect, quotas – so they are forced to reflect the diversity of the workers they seek to represent.

And union structures too often “replicate our workplaces rather than something we’ve built ourselves,” Livingston adds. Young activists are used to more non-hierarchical ways of organising in their social movements, from Extinction Rebellion to renters’ rights groups.

The collapse in union membership since the 1980s – despite four years of growth most recently – has coincided with a collapse in media attention, with almost no dedicated ‘industrial correspondents’ employed by UK news outlets today.

In the US, unions have started to counter this head on – funding journalism directly. “One of the most successful trends in the labour movement in US recently has been unions supporting digital journalism. It has led to virtuous cycles of better union coverage,” – and thus awareness among young workers, in a virtuous cycle, journalist Sarah Jaffe says.

In an increasingly unstable labour market, the challenge for unions is immense. But it is barely a patch on the daily struggle of workers on zero-hours contracts, scraping a living from gig to gig. They are the dock workers of today, with added smart phones. Experiments for a ‘new unionism’ are happening. Now they need to be shared and scaled up dramatically. ‘Make Bosses Pay’ hands those ideas a loudspeaker.

Thanks to the TUC for sponsoring Left Foot Forward’s coverage of the event. If you have a trade union issue or campaign that needs covering, get in touch: [email protected]. Image credit. LFF is proud to be supported by Unite.