"All we are asking for is equality with the rest of the NHS staff. We are tired of being treated like second class workers." 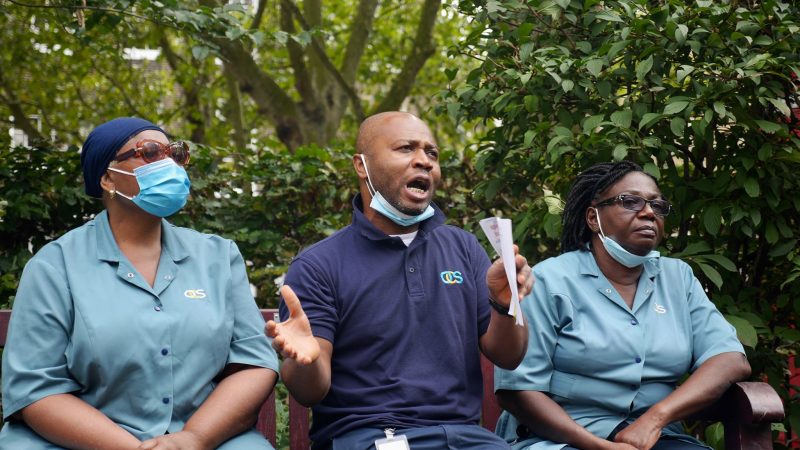 Cleaners who won their fight to end outsourcing at Great Ormond Street Hospital (GOSH) are balloting for strike action, after alleging their in-house contracts deny them the same rights as NHS staff.

United Voices of the World (UVW) – the relatively new trade union described as ‘dedicated to representing Black, Brown and migrant workers’ – has denounced what it calls a ‘two tier system’, which the union says amounts to racial discrimination under the Equality Act 2010.

The in-house cleaners claim they are denied annual leave, maternity/paternity pay and redundancy, and have accused GOSH of failing to keep their promises for equal conditions, after they were taken in house last December.

United Voices of the World union, representing the cleaners, said numerous attempts to talk to GOSH had been stonewalled. “They have made no attempt to negotiate despite being warned on numerous occasions,” a spokesperson said. This week, they announced they would hold ballots this month over possible strike action.

The spokesperson for UVW added: “It is our understanding that it is GOSH’s intention to deny the cleaners full Agenda for Change (AfC) contracts and only afford them the NHS terms and conditions in respect of NHS flat rate pay and pensions.

”It therefore appears they are more determined to deny the cleaners equality or a voice at the table than avoid disruption to patient services. How disappointing.”

Alpha Anne has been working at Great Ormond Street hospital for 7 years: “All we are asking for is equality with the rest of the NHS staff. We are tired of being treated like second class workers,” he said.

The ballot to strike comes just months after the cleaners won an in-housing agreement that was widely lauded as an important victory against precarious work contracts. After months of campaigning, in December 2020, domestic workers were made official NHS staff marking an end to outsourcing at the hospital and to the £10 million-per-year contract with multinational contractor, OCS.

UVW claims the hospital’s ‘reluctance’ to give workers full rights is ‘tied into issues of structural racism’ they hoped might have been resolved when they were brought in-house.

Last year, workers argued that under the 2010 Equality Act their precarious contracts constituted racial discrimination – almost all workers employed by private companies are from BAME backgrounds.

Workers say the two-tier system persists and that they are organising to take to the picket line to demand parity with other NHS employees.

A spokesperson from Great Ormond Street Hospital Trust told Left Foot Forward: “Our domestic services colleagues transferred from OCS to GOSH on 1 August 2021, and since then we’ve been working closely with Trade Unions recognised by the Trust, particularly UNISON and Unite, to start bringing multiple sets of terms and conditions in line with Agenda for Change, the statutory framework for pay and conditions in the NHS.

“Since 1 August we have enrolled transferred staff onto the NHS pension scheme, implemented NHS Sick Pay entitlements, raised their pay by 3% and introduced a minimum hourly rate which matches the minimum under Agenda for Change. Other measures will follow until conditions are equitably aligned. We’re taking a careful and considered approach to our due diligence on this so that no-one is disadvantaged by the changes to terms and conditions.”