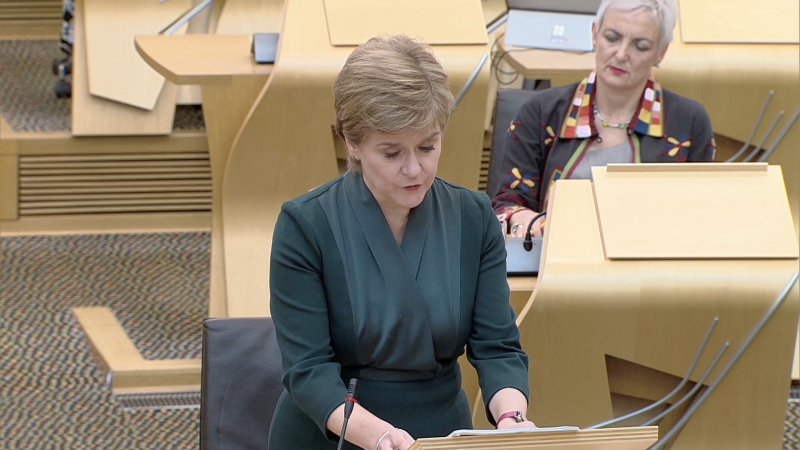 Scotland’s First Minister has laid her first programme for government following the cooperation deal between the Scottish Greens and Scottish National Party.

Addressing the Scottish Parliament this afternoon, the SNP’s Nicola Sturgeon set out a series of landmark policy pledges after the Greens’ co-leaders were given cabinet roles for the first time.Both governing parties say the plans will lay the foundations for a Just Transition to a low-carbon economy and a new deal for tenants over the next year. A strategy for the private rented sector will be published by the end of the year and will include proposals for a system of rent controls.

There will also be increased funding for home energy schemes and to tackle fuel poverty, part of at least £1.8bn investment in net zero buildings contained in the cooperation agreement between Scottish Greens MSPs and government.

Here’s a selection of other policies announced in the SNP-Green Programme for Government:

2. A new publicly-owned National Infrastructure Company, to ensure all infrastructure projects work ‘for the public good’.

3. Investment for at least £1.8bn over course of this parliament to allow decarbonisation of 1m homes by 2030.

4. Free bikes will be provided to children in Scotland whose families can’t afford them. The Greens have control of the ‘active travel’ portfolio. Sturgeon announced plans to “ensure that at least £320 million or 10% of the total transport budget goes on active travel by 2024‑25, ensuring greener, cleaner and better connected communities”.

5. Everyone in Scotland under 22 years old will be eligible for free bus travel from January 2022.

6. By the end of 2023 the vast majority of diesel buses will be taken off Scotland’s roads.

7. A new Scottish national park, alongside plans to invest more than £500m in the ‘natural economy’ this parliament – restoring woodlands, peatlands and natural habitats. “The climate crisis is inseparable from the nature and biodiversity crisis” the First Minister said.

8. The government will nationalise ScotRail – Scotland’s train service – next year.

9. A new National Care Service, with legislation introduced in this parliamentary year. Sturgeon called it ‘the single biggest public service reform since the founding of the NHS’, following a government consultation.

10. Improving national wellbeing with increased investment in mental health of at least 25% over this Parliament.

11. “Tackling the drugs death emergency with £250 million investment over this Parliament, ensuring better outreach, treatment, rehabilitation, and aftercare services in every local authority.” Scotland has the worst drug death rates in Europe.

12. “Expand free early learning and childcare to 1 and 2 year olds – starting in this Parliament with children from low-income households.”

13. “Starting this year, invest £100 million to support frontline services and focus on prevention of violence against women and girls from school onward.”

Commenting, Scottish Greens co-leader Patrick Harvie said: “This is a historic programme for government, the first with a Greens agenda anywhere in the UK. I’m proud we will lead efforts to lower the emissions produced by Scotland’s buildings, and the increased investment announced by the First Minister will begin that work.

“This programme for government paves the way for a just transition for workers too. This includes the £500 million Just Transition Fund for the North East and Moray, where alternative jobs in low carbon industries are most needed.

“I’m also proud to be leading a new deal for tenants. Our strategy will be published this year and will propose a system of rent controls that will tackle spiralling costs for those in the private rented sector.”

The cooperation agreement commits the Scottish Government to grow onshore wind, invest in active travel, public transport and a green industrial fund, and bring in new protections for nature, including the establishment of at least one new national park.

The parties have also pledged reform of the Gender Recognition Act, land reform legislation, and a new bill on a second referendum on independence for Scotland.