'Government sources' are standing like Cnut against the tide of home working. They'll be washed away. 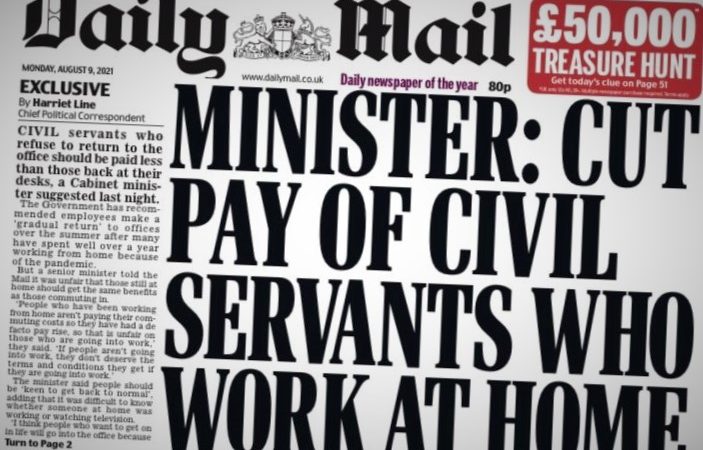 The Right’s longstanding grudge against civil servants has come in many forms throughout the years. But this week has seen it take a new, and more cowardly turn.

The papers are awash with anonymous government briefings that civil servants should have their pay slashed if they don’t head back to the office.

The off-record witterings come with the outdated assumptions that those who aren’t in offices aren’t in fact ‘working’. A senior minister told the Daily Mail on Monday: “If people aren’t going into work, they don’t deserve the terms and conditions they get if they are going into work.”

Ministers have of course been publicly desperate for staff to return to offices to ‘kick start’ the economy – egged on by papers like the Mail (owned by the company which also runs the freesheet for commuters, Metro) and The Telegraph. At the same time, departments and businesses alike have spent much of the past six months planning to make the work-from-home shift permanent. Indeed, only this March, three quarters of journalists surveyed by industry paper Press Gazette said they were exclusively working from home.

Yet the anonymous minister fails to see it, telling hacks: “People who have been working from home aren’t paying their commuting costs so they have had a de facto pay rise.” If they really believe that, you should be even more worried about the lack of evidence-based policy making in the UK than you were before.

What has in fact happened is that civil servants – along with 46 per cent of UK workers – have turned their homes into offices, and stumped up all of the costs for extra electricity, heating and phone calls for much of the past 16 months. Far from being subsidised, millions of Brits have in fact subsidised their bosses.

And while ministers try to whack civil servants into returning, much of it is for show. The policy would be a legal minefield, and some departments simply haven’t got enough office space for everyone to turn up.

Back in February, the Prime Minister said he was confident that workers will return to traditional work patterns. That seemed unlikely even then. Now it seems down-right batty. Home working is here to stay.

As the Chartered Institute for Professional Development has noted, home working has been “one of the big success stories of the pandemic”. In September, they noted that working from home on a regular basis was expected to rise to 37 per cent of the workforce. It seems remarkably prescient. At the end of May, 37 per cent of workers said they were working partly or fully from home. Taking into account the fact that around half of jobs can’t be done from home, the figure for office workers will be far higher.

Responding to media briefings this week, Dave Penman, the general secretary of civil service union FDA, told the Telegraph: “These cowardly anonymous briefings from ministers only demonstrate that they are out of touch with modern working practices and, it would appear, also out of touch with their own Government’s priorities.

“What should matter to ministers is whether public services are being delivered effectively, not where individual civil servants are sitting on a particular day or concocting a phoney war on hybrid working to grab a cheap headline.”

Civil servants have been working non-stop throughout the pandemic, without being furloughed. Many will be burnt out, with their commute replaced by longer hours. What good are these unenforceable threats going to do?

And while Downing Street has tried to publicly pour cold water on the claims of a pay cut for civil servants who don’t return to the office, the anonymous briefings have continued.

These government figures are standing like Cnut against the tide of flexible working. More than that though, their idle threats will deal a hammer blow to civil service morale.

In the free market – supposedly beloved of the Tory right – civil servants who are being threatened with pay cuts unless they rush back to the office (a demand not imposed on many private sector workers) can simply jump ship, potentially to higher paying commercial roles.

Look at any job site, and you’ll see that office roles which fail to allow homeworking are getting rarer. And no wonder: almost all workers – 85 per cent – want to use a ‘hybrid’ approach of both home and office working in future, with civil servants among them.

Businesses are waking up to this shift. Why can’t the government?