Every justification for war used by Bush and Blair and their successors has been exposed as at best naive optimism and at worst outright deception. 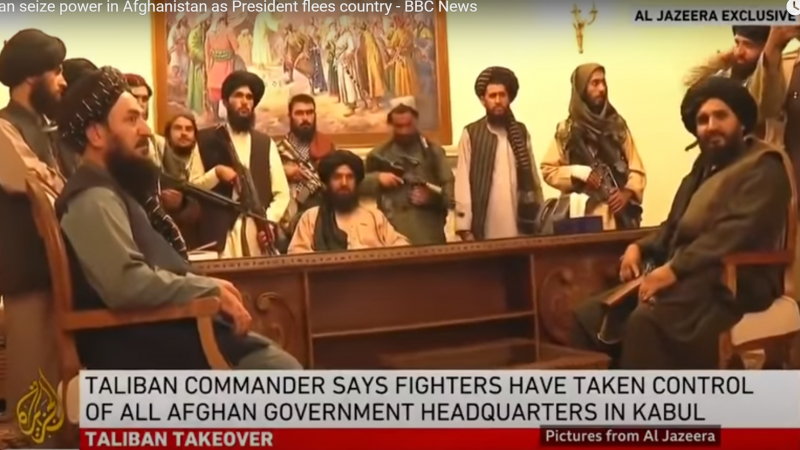 Twenty years ago, Tony Blair promised to bring democracy to Afghanistan with all the zeal of a Victorian colonialist offering to bring civilisation to the heathen. After two decades and uncountable thousands of deaths, Afghanistan has returned to the control of the Taliban.

Bizarrely, some are trying to use this situation to argue in favour of military intervention. If only the US and UK troops had stayed a bit longer, they suggest, things would be better. The reality is that if those troops had continued to behave as they have done, then we could expect the situation to be similar whenever they had withdrawn.

The Taliban and the NATO forces have always been two sides of the same coin. They have used each other’s existence to justify themselves. Al Qaeda’s horrific murders on ‘9/11’ were used by George Bush and his allies to justify the killing of an even greater number of civilians in Afghanistan. The Taliban, despite their own record of death and destruction, have used the NATO atrocities in Afghanistan to recruit members and to bolster support for their own vile agenda. Militarism anywhere encourages militarism everywhere.

The people who have suffered most have not, of course, been fundamentalist warlords or western politicians, but the people of Afghanistan, sacrificed to the ideals and military interests of the competing forces.

All the lies ring hollow now. Every justification for war used by Bush and Blair and their successors has been exposed as at best naive optimism and at worst outright deception. Terrorism was to be defeated, the Taliban removed from power, democracy and freedom built on the back of the bombs. Tony Blair said he wanted to improve the position of women in Afghanistan, an ambition that I suspect he did not mention to his friends in the government of Saudi Arabia on the many occasions on which he was selling them weapons. The real liberators of Afghan women have of course been Afghan women themselves. Many people in Afghanistan have shown a staggering and humbling ability to stand up for their own rights in the face of both the Taliban and the US forces.

It has all been exposed as a waste: the 457 British forces personnel killed, the other NATO troops who died with them, the much greater number of Afghans killed, shamefully uncounted by the western authorities. As for the billions of pounds that were wasted on weaponry and armed forces, I invite you to imagine what might be different if these billions had instead been spent on improving healthcare and education in Afghanistan, or building up local communities and their economies, or resourcing civil society, or training people around Afghanistan in mediation, conflict resolution and strategies of mass non-co-operation with injustice.

There is much talk of whether “we” should be in Afghanistan. For too long, “we” has meant the British armed forces. In effect this means the US armed forces.  Although British troops like to emphasise that they are very different to “the Americans”, the reality is that they are sent to fight only as a tribute band to the Pentagon. However many sign up out of a genuine belief that they are protecting the British people, they find themselves deployed in the service of the US establishment.

“We” – the British people – need to support the Afghan people. That does not mean calling on our government to send men with guns to sort things out. It means supporting international organisations working with whatever remains of civil society and human rights groups in Afghanistan after the mess created jointly by the Taliban, the NATO forces and the opportunistic warring groups who find their allies on different sides at different times.

It also means resisting calls for military attacks on other countries, which are so often justified on the grounds of promoting democracy even as the UK armed forces provide military training to some of the world’s most oppressive regimes. It means resisting the arms trade. It means recognising that people around the world – British, Afghan, Russian, American and everyone else – share the same human needs, and have more in common with each other than with those who would wage war in our name.

And it means accepting the most obvious truth that the situation has brought to the surface: that you cannot build democracy with guns and bombs.