"I'd be disturbed if the Tories *weren't* worried about the growing influence of Green politics," the Greens' co-leader said. 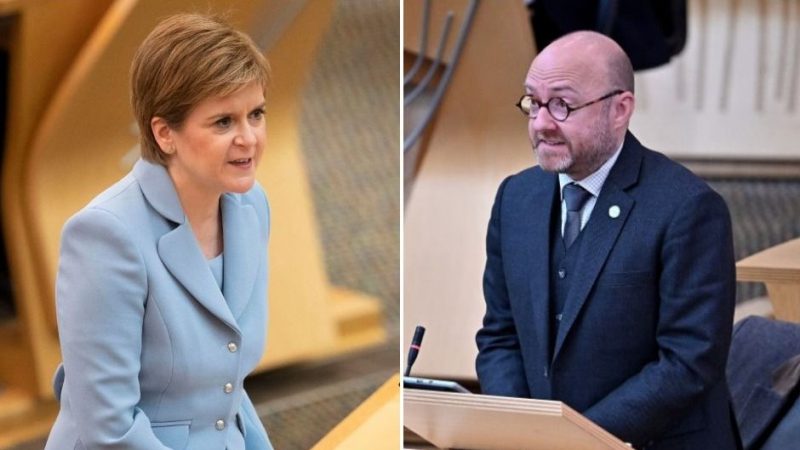 The Scottish National Party and the Scottish Green Party are on the verge of signing a historic power-sharing agreement, after Nicola Sturgeon’s SNP fell one seat short of a Holyrood majority in May.

The deal would be the first time the SNP had signed a formal power-sharing agreement with another party. Previously, the Greens had provided informal backing to the SNP in crucial votes, such as confidence motions and passing budgets.

Previous concessions won by the Greens in this arrangement have led to free bus travel for under-21s in Scotland, a policy that kicks in next year.

But the Scottish Conservatives have lashed out at the prospect of a formal pro-independence power sharing agreement, branding it a ‘coalition of chaos’ that would damage the oil and gas industry.

But Scottish Greens co-leader Patrick Harvie MSP laughed off the Tory attacks, writing: “This feels a bit like attack articles in the Daily Mail. I’d be disturbed if the Tories *weren’t* worried about the growing influence of Green politics.”

Another Scottish Green Party member wrote: “The Greens’ “agenda” is to make sure those 100,000 people still have good jobs when the oil industry is gone, instead of walking away and leaving them with nothing like you Tories did to the miners, the shipbuilders and the steelworkers.”

Key sticking points in the talks are understood to be whether the Greens will be free to criticise SNP decisions on climate change, or if they will instead be bound by collective responsibility.

The Greens are expected to push for more ambitious climate policies as part of any deal. Scottish Green MSP Maggie Chapman has also been pushing for the Scottish government to use its powers to roll back Tory welfare ‘reforms’: “It is absolutely crucial that the Scottish Government uses fully its new powers over social security to provide genuine support to those who need it and to repair the terrible damage done by UK welfare reforms.”

The Scottish Greens secured a record haul of MSPs in May, winning eight seats, up from six. The SNP have 63 seats, meaning together they command 55% of seats.

Any deal will have to be backed by the Scottish Greens’ party council, and then Scottish Green party members at an emergency general meeting later this month.

A deal is understood to be almost complete, and ready to be shared with the party’s council at the end of the week.

Meanwhile, Keir Starmer has ruled out going into coalition with the SNP, as he tries to shore up support in England. Previous Tory attack lines about a ‘coalition of chaos’ between Ed Miliband and then-SNP leader Alex Salmond in 2015 were thought to have hurt Labour’s chances.