Clearly Mr Raab needs another long holiday on a Greek island to clear his head. 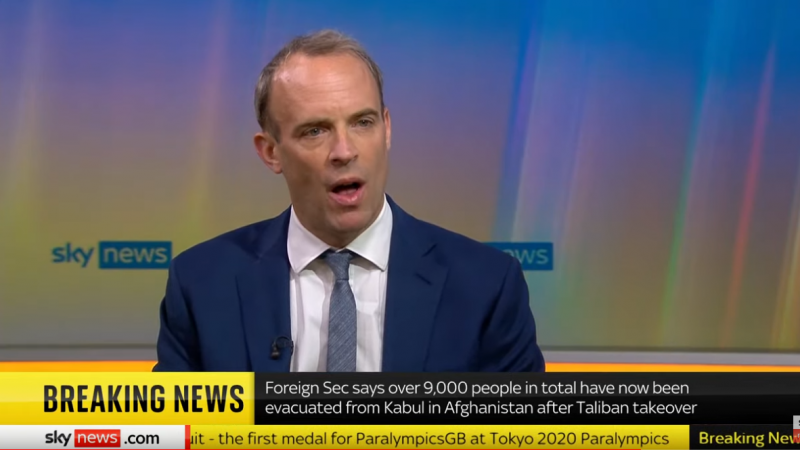 At risk of publishing the understatement of the year, the Foreign Secretary isn’t having a good month.

On Tuesday, LFF revealed that voters want Dominic Raab to quit over his handling of the Afghanistan crisis, after he stayed on holiday in Crete rather than returning to handle the refugee evacuation.

The representative poll of over 2,000 GB adults, conducted by independent pollster Savanta ComRes for Left Foot Forward found that 51% say he should resign, to just to 24% who disagree. Most worryingly for the Foreign Secretary, a plurality – 41% – of Conservative voters think he should quit, to 38% who do not.

Perhaps that worry has got to him. In an interview on Sky this morning, the embattled Foreign Secretary was pointed to the poll, which has been picked up in the Mirror, Independent, Mail and more. Here’s how it went down (you can watch it here).

Dominic Raab: “Well look…self-selecting reader polls in news polls are not a particularly accurate barometer. But in terms of what we’re doing…as Foreign Secretary, of course with the benefit of hindsight I wouldn’t have gone away. But that’s the luxury of commentators.”

He didn’t even bother to check the facts. Instead, we saw the ministerial kneejerk in action, instantly refuting evidence that undermines him. The poll for LFF was not ‘self selecting’ – it was reflected the population of the UK.

But Raab won’t let facts get in the way of pre-prepared lines. On BBC Radio 4’s Today programme this AM, he repeated that the deterioration in the situation in Afghanistan was not ‘clear’ on Friday 13th, when he was on holiday in Crete – and reportedly begging the PM (successfully) to let him stay two days longer. “I don’t think anyone foresaw [Kabul’s takeover]’ he said.

No one except everyone in Britain and across the world, seeing the footage and stories of Kabul surrounded that Friday, as cities fell swiftly to the Taliban across the country.

Raab suggested he had consulted the security services on the situation. If they told him Kabul was safe that week, we should all be very worried about UK intelligence indeed. My guess is that they too had seen the Taliban rapidly take over Afghanistan that week and would be warning that Kabul didn’t have long left.

As calls grow for him to quit, the right-wing foreign sec seems to be playing fast and loose with the truth.

Clearly he needs another long holiday on a Greek island to clear his head.